Desmond Kaumu, from Papua New Guinea, has won the Under 18s best and fairest in the Cairns (Queensland, Australia) Australian Football League. The following report is based on information from Scott Reid in PNG.

The PNG junior development program, known as the Oil Search Pathway, has begun producing some exciting young players. Four under 18s have played for the City Cobras in the Cairns AFL this season. Cairns is a far north Queensland town and has a long history of Australian football, which should be an inspiration to leagues around the world (more on this in a later story). 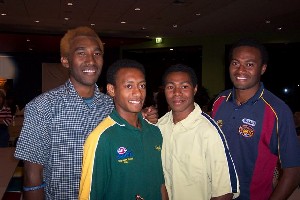 Pictured at right are Des Kaumu (2nd from left), Thomas Linge, Glenn Tom and Alestar Sioni. All four Papuan's have played for the Cobras in 2004, and Alestar spent much of the pre-season training with AFL goliaths the Brisbane Lions (reigning triple premiers). Des played with Redlynch Lions as the Cobras did not field an U18's side. He has shown some of his huge potential by winning the Cairns U18s best and fairest. Remarkably, he has also played the full season with the Cobras' senior side. Perhaps one of these boys can make the next step and be drafted to the AFL.

The success PNG is currently experiencing in junior development is thanks to the hard work of many volunteers, as well as the AFL[*1] through the AFL Queensland[*2] , the AFL Cairns[*3] , City Cobras[*4] and the Redlynch Lions.