In the lead-up to the second International Cup the British Bulldogs have been training hard under the guidance of former Adelaide Crows premiership player Matt Connell. The Brits are quietly confident of their chances over the next few weeks. World Footy News (WFN) spoke with Connell about his career and Aussie footy in the UK.

WFN: Matt, how many games did you play in the AFL and what awards did you receive?

Connell: "3 with West Coast Eagles and 96 with Adelaide including 2 premierships and a B&F" (Matt won the Best & Fairest in 1995 for the Adelaide Crows).

WFN: What about for the BARFL?

Connell: "I played with the North London Lions in the Barf in 2002, a year they won the Premiership" (so a third premiership medal!)

WFN: How long have you been living and working in the UK? How's the teaching going and to what extent if any do you teach footy at the school?

Connell: "I've been living in London for two years. I was head of Boys PE at Bishop Douglass Catholic School this year and have incorporated Australian football into the curriculum which is a huge success and the kids love it."

WFN: How did you come to be coach of the Bulldogs, what involvement with them if any in 2002?

Connell: "I was approached by the BARFL president (Remon Gazal) and committee to coach the British Bulldogs for this international tournament back in February. I am very excited and proud to be the coach of the British team, it's not a position you should take lightly. It is fantastic to have the help of an assistant coach like Josh Grosse (ex WAFL and FDT in Western Australia). I have had great assistance from the BARFL in all areas of our preparation and have been most impressed with the professionalism and organisation of AFL in the UK. We are hoping that this tournament provides a real show piece and is a true reflection on the healthy state of the development of the game in the UK

WFN: "How is the squad shaping up? What do you think of their skill level?"

Connell: "The boys have a great passion and commitment to the game and team. If this was not a starting point to work with I would not have taken on the job, as you can't get anywhere without this foundation. We have slowly looked at basic skill development, with a lot of repetitive drills so that the skills become automatic in a game situation. From this basis we have also overlapped a game plan and strategy which we believe will play to our strengths."

"We have a squad of 35 committed players who have been preparing whole heartedly, some for the past year, to get the opportunity for this moment. Each player has a firm belief in themselves and each other and this is a great basis for any team. Obviously we are going to be up against quality and much improved opposition but we plan to at least hold our own and will be trying to match them in all areas. We have picked a well balanced squad with a good mix of experience and believe you will be excited by many of our younger players who will be on show for the first time."

WFN: What do you think about playing footy in such an international tournament?

Connell: "We look forward to playing against all the nations in our pool. The boys are very excited about some degree of cultural and social interaction. I am positive it will be fierce and willing on the field but am sure there will be some friendly banter over a cup of tea after the game and at functions. What a fantastic opportunity to meet interesting people from all over the world, different in so many ways, but all with a common love and passion for AFL. I think the Tournament is a great concept and hope that the AFL gets right behind it. It can only go from strength to strength."

WFN: You won't be the only nation to improve since 2002. How will you and your lads go? Any comments regarding the opposition at the IC? General feelings regarding coming back to Oz in this role?

Connell: "I am sure all nations realise we have a responsibility to put on a good show so people see a true reflection of the healthy state the game finds itself in internationally. Really looking forward to the challenge of coaching down in Australia against quality opposition and I know the boys cannot wait."

"I haven't coached at a senior level before, it has been a steep learning curve and would not have been able to get this far without the support of my assistant coach Josh Grosse, the Barf president, team manager and committee. But after a big build up it is going to be great to finally see the boys in action for real points. It is hard to gauge where the opposition is at, but we know we are underdogs and only hope to put on a good show and try and match the opposition in most areas."

WFN: Best of British luck Matt, great to see the boys so committed with all the tragic events in London recently, true blitz spirit.

Connell: "Thanks Peter. It has been pretty hectic over here the last few weeks. I'm proud to coach these boys."

The Bulldogs squad with full player profiles can be seen on http://www.barfl.co.uk/bulldogs/index.php[*1]

The tour had been in doubt, but major sponsors Bartercard and Walkabout came through to support their cause. The squad is pictured below at Heathrow Airport.

The message for training on Tuesday night 19th July was: "Bring your passport to training" - seems that's something Aussie Rules footy players will have to throw in the kit bag more often this century! 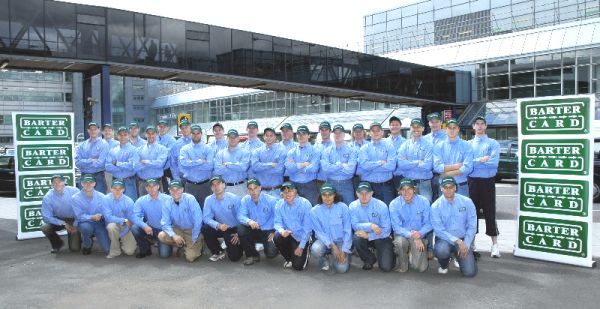