At 1pm on Wednesday 3rd August the Irish opened their International Cup title defence with a narrow win over much improved Canada, running out 8 point winners after trailing at the last change.

A strong wind favoured Team Canada as they kicked towards the Williamstown Road end of Woodruff Oval. A fairly small ground, there was plenty of in-close pressure. This may have been expected to suit the Europeans, given their small grounds and Gaelic football background, but the superior body size of the North Americans was a telling factor. Physical strength and height helped keep the Canadians close and with the extreme pressure the game was scrappy. Ireland peppered the goals late in the first half but only came up with behinds. Scores were roughly level for the entire game, and only in the last few minutes did the defending champs take some sort of control.

The Irish appeared to drop the ball to boot better than in 2002, not displaying the one-handed style of Gaelic football. When under pressure this method came through whereas the Northwind players tended to slam forward awkward punts that made it difficult for their forwards. In the end the game could have gone either way, and the lads from Ireland will just be glad to have shaken out the jet lag with a win. Under the new finals system that sees the top four play-off in semis, the Canadians can be proud of their effort and still look to force a finals spot. Impressive players to watch for were the tall Irish captain in the ruck (Brian O'Connell) and number 18 (Cliffard Richardson) in defence, who has a build and style similar to Hawthorn's Nick Holland. The Canadian ruckman Chris Cunning was also strong all day, using his size to give the opposition a thing or two to think about. 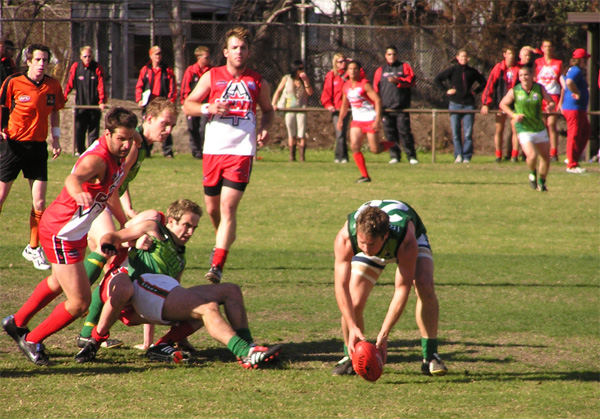