The Spanish Bull's took on the Japanese Samurai in the opening game of the tournament. The new guys were an unknown quantity, and were facing a side that has big plans in 2005 after a winless 2002.

Spain had the first win of the Cup winning the toss and kicking with a stiff breeze. Japan hit back by winning the first clearance and setting the tone for much of the game. Michito Sakaki scored Japan’s first goal roving the ball off the pack. Toshohiro Wakazawa followed up with the team’s second after gaining the free 40 metres out, and then having a Spanish player walk across the mark, allowing him to kick from point blank range. Shortly after another 50m penalty was awarded after Yukihide Nishida convinced the umpire that the Spanish player had knocked the ball from his hand following the award of the free kick. Nishida’s kick came to ground off hands to be roved by Hiroyuki Shiba who crashed through defenders to kick Japan’s third on the run. A third 50m penalty for the quarter saw the Japanese Shiniki Tanaka spray the ball wide for a minor score. The Spaniards seemingly overwhelmed by their debut, but showing some positive signs withstanding many Japanese attacks.

Kicking with the wind in the second quarter the Japanese wasted early opportunities, kicking three behinds before Munehiko Tabata was pushed in the back and converted the free kick from 25 metres out. Yosuke Kuno was looking dangerous up forward and goaled after taking a good mark on the lead. The Japanese then kicked another three behinds and three out of bounds on the full before Michito Sakata kicked his teams final goal for the quarter. Pascual Fernandez became the first scorer for his country at an International Cup with a behind kicked on the siren. The game looking like being a big blowout at half time with the Spanish unable to kick a goal, while the Japanese regularly hitting their forward targets.

Spain started the second half promisingly with the wind at their backs again scoring two behinds early on, and their first major to follow with big Pablo Mas the Bull’s ruckman tackling the Japanese player who was bouncing the ball. Going back and slotting it from 25 out. The Japanese reply was swift with Yosuke Kuno taking the ball and running around defenders for his second. Andres Antequera kicked Spain's second for the quarter which was again matched by Japan when Kuno passed to Hiroyuki Shiba who goaled from the set shot 30 metres out on a tight angle.

Japan’s Michito Sakaki was to have a big last quarter kicking three goals and a point with some great running roving efforts in his team’s forward line. With two more goal’s and the Bull’s best reply being two behinds, the result was beyond doubt with the final score being Japan 13.10 (88) to 2.5 (17).

Best players for the Samurai were Michito Sakaki, Yosuke Kuno and Shinici Tanaka, while the best for the Bull’s were Andres Antequera and Pablo Mas. The game was played in good spirits. The Japanese team’s experience showed out against the Spanish team time and time again. But for better kicking accuracy they may have won by more. The Spanish did appear to be quite fit and matched the Samurai’s for pace, but were found wanting in their poise in traffic and general delivery to their forwards. Their backmen did a good job to hold the Samurais as much as they did. The Samurai camp which was large in number and voice were ecstatic when the final siren sounded. 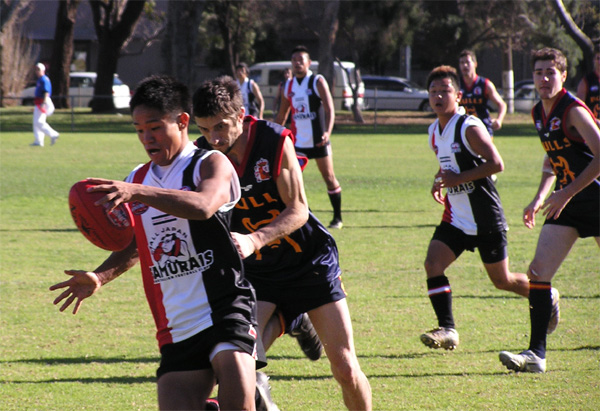