The US Revolution team keen to show their improvement from 2002 came out hard against the South African Buffaloes team. While winning convincingly they found a fast dedicated opposition also showing improvement and a more balanced side than in the past.

Brad Pope (24) and George Lakomy (17) got the Revolution off to a flying start with early goals. Gladwin Sekete roved the pack nicely to run in and kick South Africa’s first goal. Early indications saw the US good in the air and the South Africans even with them on the ground, with the Buffaloes tackling impressive in twos and threes. A further goal to the US followed up by some sprayed kicks from South Africa into a stiff breeze gave no great indication of which side would prevail. Dainauski sprayed a kick wide late in the quarter with scores at US 2.3 (15) to Sth Africa 1.2 (8) at the bell.

The US again kicked two early goals in the second quarter working the ball up into the breeze with running and accurate passing. Pope and Jones goaling for the Revolution. Walker crumbed off the pack and goaled while being tackled. The Revolution goaled again through vice captain Tom Ellis who received a 50m penalty when the Sth African player failed to return the ball correctly. He went back and drilled the goal from 40 out into the strong breeze. South Africa were failing to make full use of that breeze kicking five behinds and Bluey Carroll kicked offline to record one behind for the US. At the half time break the US had a commanding lead US 6.4 (40) to Sth Africa 1.7 (13).

Things looked to have turned around in the third quarter with Willem Jonker taking a big grab early in the quarter, but again the minor score was registered for the Buffaloes. The US then using the breeze and kicking long got the ball down to Bluey Carroll who goaled from 45m out on a 45 degree angle. Shortly after this Carroll again was shooting for goal after a great pass from Kyle Strenski, but this time was inaccurate for a minor score. He was to make amends moments later when Dainauski delivered the ball into Carroll who seemed to be in everything and he goaled off the ground in the goal square. The US really appeared on top as Carroll was pushed in the back and shot at goal with a free kick, only to see his behind tally surpass his goal scoring. Failing to capitalise on all the ball in their forward 50 the US kicked two more points before the ball returned to the Northern end of the ground. Steven Malinga put on his team’s second major, goaling from a nice pass from 40 out. Going into the last quarter the scores being US 8.8 (56) to Sth Africa 2.8 (20)

Malinga was again in the action early in the last quarter getting the ball out of the pack and goaling while off balance. Tommy Ellis then kicked the Revolution’s only goal in the last quarter with a great solo effort. After marking 30 metres out the breeze picked up and his kick fell short, following up his kick he was able to rove the ball off the pack and goal on the run. The South Africans for the first time looked to dominate play for much of the last quarter both in the air and on the ground kicking well and finding teammates on leads consistently. Jakobus Smit took some nice marks but was unable to goal with the Buffaloes kicking two behinds. Willem Jonker finished off the scoring for the game kicking a great goal to make their scoreline look more respectable.

The US showed a superiority in skills around the ground in both kicking and marking. The South Africans showed great run but unfortunately their finishing let them down. The addition of Jonker and Smit to their side gave them some good height and they stood out in the second half. Bryan Mitchell the Sth African ruckman was very impressive with a huge vertical leap, winning most of the taps and will continue to give his team good use of the ball in the tournament. Lucero, Pope and Carroll were standouts for the US with Strenski giving them good run and delivery, and Tommy Ellis able to create something special for his team. The US side are looking a solid unit and will be hard to beat. Apologies if any of the names are wrong in this summary as I am told the actual numbers worn by the players may have been different to those listed in the official program. 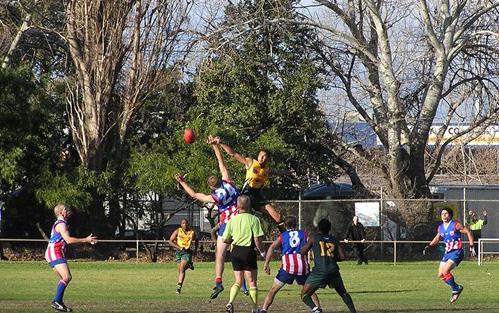 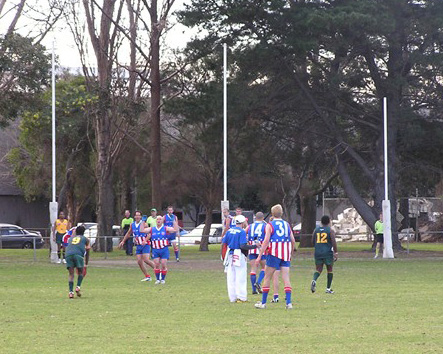