The Buffaloes' dream of winning their first match was realised when the siren sounded leaving them two points ahead of the Japanese side who had battled manfully to the very end. Scenes of jubilation followed as the players sung and danced to celebrate their finest moment so far.

As predicted the game was played at a fast pace, with both sides endowed with a fleet of swift running small players. The Japanese appeared to be the steadier side in the first half, using their short chipping game to control the play. Balancing the ledger for the Africans was ruckman Bryan Mitchell whose extraordinary leap ensured he got his hand on the ball first. Unfortunately he rolled his ankle in the second quarter and his availability in the coming rounds could be crucial to South Africa's chances.

At half time South African coach Steve Harrison asked his running players to get to the fall of the ball "front and centre" of the marking contest. He emplored them to get excited about their chance to win their first ever match, and the players fired up for the second half.

Japan matched their passion and there was never more than a goal between the two nations, both hoping to move up the ladder of international footy after modest 2002 campaigns. Slowly the height advantage enjoyed by South Africa, particularly amongst the players of Afrikaans origin, began to give the Buffaloes an edge. That included an absolute hanger that had the crowd buzzing, but unfortunately was not converted. For all the industrious work of the Samurai midfielders, the South Africans began to take telling marks in front of goal.

In a thrilling final quarter that really gave the spectators a taste of what international footy can produce, the scores were levelled when South Africa's Willem Jonker from Potchefstroom University slotted a goal from 40 metres. Hiroyuki Tohyama received a controversial free 25m out and cooly kicked straight to square the match again. In a nailbiting finish Itsoseng's Steven Malinga ran onto the loose ball at 50m and dribbled a shot goalwards. Despite Japan's desperate chase it trickled over for a one point lead. After a short stalement another point was scored and the siren sounded - South Africa winning their first ever match, by just two points.

The Buffaloes players were ecstatic with their victory and soon broke into song and were dancing around the field. In a tremendous gesture, Japan coach Troy Beard, who has put his heart and soul into growing the game there, gave a speech to the South Africans, congratulating them on the win. AFL South Africa Chairman Brian Dixon reciprocated with praise for Troy, and for this reporter the emotion of the moment was the highlight of the tournament thus far.

World Footy News hopes to have video footage of the African's celebrations in a few weeks time (once this busy Cup period settles down). 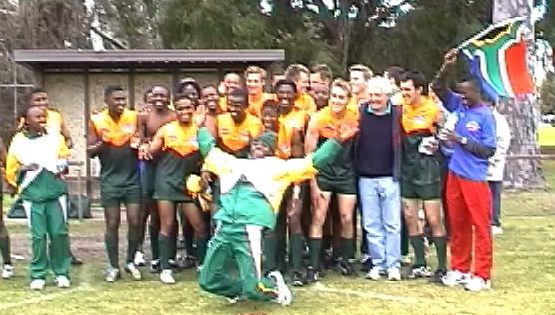