Revolution as US upsets favourites

In what may be described by some as the biggest upset in International football, the US has defeated Ireland in a game that saw the miserly backlines of both teams give new meaning to the word tight. The loss was Ireland's first in international Australian football, ending a run that stretches back to the 2001 Atlantic Alliance Cup.

On a bright sunny day at Port Melbourne, with a light breeze that did not favour either end the battle of two footy heavyweights took place on a slightly rain affected ground. Wet in some areas and dry in others. When Ireland kicked two early behinds from seemingly careless kicks no one was to know just how important a few points might be in the context of the game. As the ball rebounded from backline to backline through the quarter, it seemed only a matter of time before someone broke the deadlock. As Dan Kocka (17) kicked a behind from 45 out it was however only to spark another five minute period of tough spoiling, smothering, tackling and interception. The Revolution added one more point for the quarter to make it two points each at quarter time. In the second quarter the play opened up a little. The Irish started to find some run, but poor disposal kept the US team in it. Sarbarker delivered into Kocka again who this time kicked out of bounds on the full. Big Mike Finn at full back continued to repel US attacks deep into their forward line with four big marks in as many minutes. The Irish Warriors getting the ball forward again after the Revolution tired of not being able to pierce the defence, but again only a minor score to them. The US kickouts seemed to be finding the Irish and Ronan Johnston marked this one, but again fired back for a minor score. It was like Groundhog Day when the Irish again marked the kickout, but this time it was David Stynes who marked, and went back and calmly drilled the ball through the big sticks. This was followed up by another precious point when John Fahy scooped up a dropped mark by a Revolution defender. A very tight one at half time but the Irish had their nose in front Ireland 1.5 (11) to USA 0.2 (2)

At half time the Irish coach Krizan Vedic implored his team to play the ‘Good Irish running game' and not the American defensive game if they wanted to win. Bryan Stynes addressed the team and told them they weren’t looking nearly tired enough, and backed up Vekic’s call for the Gaelic running game to be their focus in the second half. The US had early use of the ball in the third with the US getting the ball forward to the northern end, Dave Thurmond ended up with the ball, but his kick going wide for another behind. But making amends he marked the kick in and went back and goaled from 40m out. Mike Finn again taking back to back marks in the backline for the Warriors kept the Revolution from adding to their score and Irishman David Stynes working hard to feed the ball out of the ever increasing packs. The Irish were only able to add one point for the third quarter and the scoreboard showed Ireland 1.6 (12) to USA 1.3 (9)

US Coach Alan Nugent spoke calmly to his charges telling them they had the Irish right where they wanted them, in a position to reverse their loss to them in 2002. The ferocity of both sides was evident from the first bounce with every contest being vital. It was the US who looked to score first but Brunmeir’s set shot fell short in the square and then Tommy Ellis’ kick shortly afterward going out of bounds on the full. Marty Curry for the US then passed nicely to Charley Ellis who could only manage a behind. It was to be Bostonian George Lakomby who would throw that cat among the pigeons though when he went back and goaled from 40m out. The US side ecstatic to hit the front but there was little time for celebration as the match was still there to be won by either side. The US drove forward once again, as both benches looked nervous, Charley Ellis was taken high 40m from goal. He drove the ball to the square but the ball went off hands and through for a behind. As the ball was being thrown in just on the Irish side of the wing the umpire spotted the Revolution captain Lucero holding his man off the ball some 30m away. Ireland’s Richardson kicked for goal from 35m out, and many hearts were in mouths, but the ball went to the right of the big sticks for only a minor score. The ball continued to bounce back and forward, with ball ups and throw ins being the order of the day as the time clock ran down. And when the bell went it was the US team home by four points.

The big question is will they meet again in the tournament. The Irish probably hope so, the Americans would not be disappointed if that was not the case, but they now know that they can beat them. Best players for the Irish were David Stynes, Ian O’Sullivan, Mike Finn and John Fahey. The best players on the winning team were Charley Ellis, Frank Bradley and Dave Thurmond. 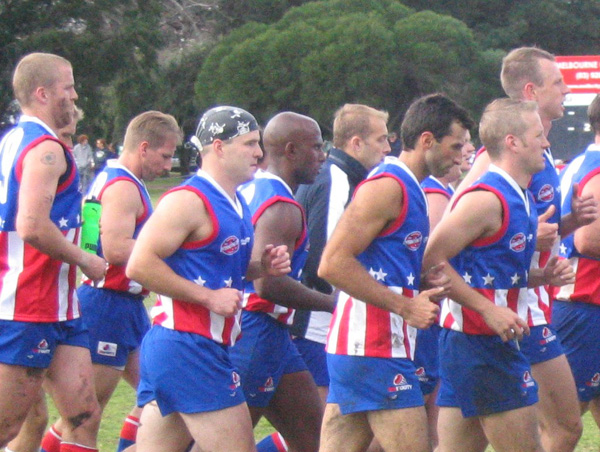 You know you're playing America when your opponent is wearing a bandana.