Canada earn respect but not the points against Mozzies

After falling behind PNG early a big loss was on the cards for Team Canada in Round 2 of the International Cup at Murphy Reserve, Port Melbourne. But after a fearsome half-time blast from their coach, the Northwind blew back into contention, only to fall short.

Down four goals to one at quarter time, Canada were struggling to match the run of the Papuans. With several young stars now playing in Queensland, the game was going as expected. A positive sign for Canada was the even second quarter when neither side could register a goal. In all the play was on-baller and deputy vice captain Jason Robinson, showing great hands in slippery conditions, but as is often the way in a losing side, most of his good work was defensive side of centre. Head coach Greg Everett was an angry man at the major break, emphasising that they had not come all this way and spent so much money, only to embarrass themselves and the Canadian guernsey. Make no mistake - these guys are passionate. Everett demanded more talk, more run, to use their height advantage, and above all, to hit hard.

There is no doubt his team responded, with their intensity at the ball and the body much improved. To the credit of the smaller Papua New Guineans they withstood the onslaught and maintained their focus on the ball for much of the third quarter. But late in the term they began to be distracted by the niggle and a few scuffles began to break out. Aaroon Falcioni then snapped a goal from the pocket, and soon after marked and goaled from long range, to give the Canucks a sniff. A massive upset was brewing going into the last quarter but somehow the PNG boys steadied and the match became a tense battle of the defences. Finally PNG gun Alestar Sioni, who recently did a pre-season with AFL powerhouse the Brisbane Lions, marked and calmly kicked the drop punt through from around 40 metres, giving him three for the day. The Mosquitoes had done enough to hold out a galant Canada, but certainly aren't dominating like might have been expected. 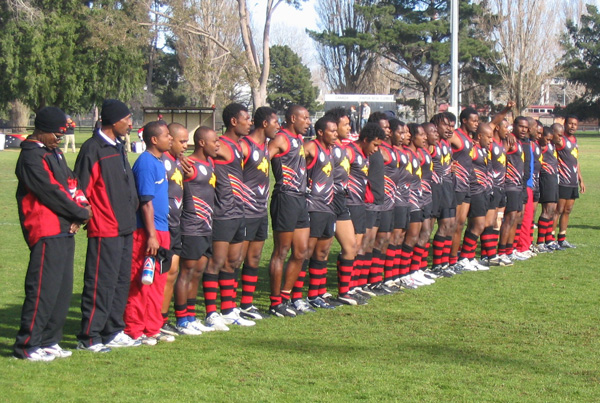 World Footy News - Canada earn respect but not the points against Mozzies
https://worldfootynews.com/article.php/20050806040821657