Mosquitoes through to the Final

With the stakes high and revenge on their minds the Mosquitoes came out on top today by 9 points erasing any bad memories of 2002 and securing their spot in the final against New Zealand.

Ireland and Papua New Guinea played off in the Final in 2002. Today might not have been played at the MCG but both sides played like their lives depended on it and they knew that this is what they had been building up to for the past year. It was now or never if they were to play on Australian Football's hallowed ground and the desperation and effort was evident even before the ball up.

PNG were kicking with a good four goal breeze in the first and were able to get proceedings started nicely from a long goal from outside 50m. Heavy rain then set in and the ball turn into a bar of soap with both sides struggling to take clear possesion. Good smart wet whether football was needed and after a bad turn over from Ireland coming out of defence Melvi (17) swooped on the loose ball and kicked truly to give the Mosquitoes a good two goal break at the first change.

Ireland dominated proceedings in the second but could not get good clean possesion in their forward line. The Mosquitoes flooded their backline and on more than one occasion had no players in their forward half. Constant forward pressure from the Irish eventually managed to earn them a free kick in the goal square and Whelan (3) converted to close in the scores. A quick reply against the run of play for PNG meant that the Mosquitoes went into the break with an eleven point advantage.

In what was going to be a low scoring affair, the Mosquitoes had numbers in and around the packs and were happy to play close in tight football and feed the ball out. This frustrated the Irish who were playing a longer more direct game but were shut down on many occasions by the flooding tactics used by the Mozzies. Another goal against the run of play by Melvi (17) gave them a 3 goal buffer late in the third. As the siren rang at the last change O'Hagan (19) gave the Irish some hope kicking a good pressure goal and giving the Irish lads some momentum going into the last change.

The last quarter was a slug fest with the ball going from one end of the pitch to the other. Each side knew that the first goal was going to make or break the game and it was the Irish who had momentum when they were awarded a free kick down field. Flavin (4) converted and there was only 5 points in it. One straight kick by either side would determine this match with 5 minutes to go and it was the Mosquitoes with their quick movement of the ball in and close who took a quick snap from a throw in to goal and seal the match.

Two scenes opposite poles were displayed after the match. Holding back tears and extreme disappointment the Irish lads applauded the efforts of their tireless opponents. On the other side were bouncing Pom Poms and singing and jubilation by the Mosquitoes and their supporters who now go into their second International Cup Final. Their opponents will be the dominant New Zealand side in what should be a superb culmination to the 2005 Cup. 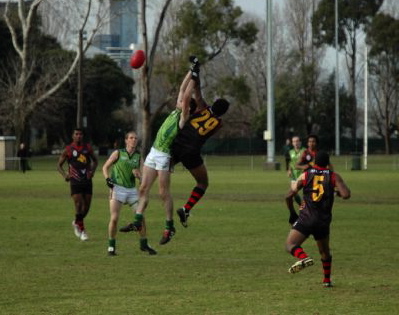