New Zealand and PNG to contest Grand Final at the MCG

The New Zealand Falcons and PNG Mosquitoes, both undefeated, have won their respective semi-finals against the USA and defending champions Ireland to secure their spots in the 2005 International Cup Grand Final at the MCG before the Carlton versus Collingwood match. We review the previous round and look at Saturday's finals.

The Kiwis were too strong for the Americans, controlling the play and moving the ball forward efficiently through disciplined, well structured football. They never really appeared challenged in the tournament and in the view of most will go in as favourites. The Papuans had a tough match against the Irish who gave it their all to get a chance to defend their 2002 crown. In wet and cold conditions the Mozzies could have been forgiven for being sluggish, given they are accustomed to much warmer environs. But they kept their noses in front for most of the game and enjoyed the slippery conditions bringing the ball to ground to the frustration of the Irish talls who would have wanted fine weather.

In the qualifying finals the Samoans played strong football with occasional flashes of brilliance to overcome the tournament's big improvers South Africa. Great Britain ran into their best form of the series, never really being challenged by the battle scarred Japanese. The second win in a row for the British Bulldogs is some reward for their long preparation for this tournament. The Canadians had a win by forfeit as the Spanish side could not put a team on the field. As the Cup's new boys they only managed to bring a small squad and after four tough games the injuries have taken their toll. All the nations were simply glad that the Spaniards made the long journey and pleasingly they plan to take the field for the final round of matches on Saturday 13th August.

In the minor placing finals it will be the battle of the Bulldogs as Britain get another crack at Samoa, who ran over them in the final quarter when they met earlier in the tournament. It will be a tough match, but Samoa have shown they can do the job and look in very good form. Canada gets its first chance of a win on the field, playing South Africa. The extra rest of the earlier forfeit will do them good, coming up against a Buffaloes side that has played five hard matches, the last against the powerful Samoans in wet and cold conditions. That should make this a close match but alas for the unlucky Northwind side, the Africans might just squeeze home. Japan and Spain will be very interesting. The Spanish have at times been competitive, whereas the Japanese are now looking very sore. They rely on a fast running game but with many injured players and fatigue well and truly setting in there is every chance Spain will snare an historic first international footy win. However, Japan deserve respect and assuming they can summon one last effort we'll tip them to scrape through.

In the playoff for third the Irish will be keen to reverse their narrow loss to the United States. This could be a real grudge match as the Europeans didn't like losing a game they felt was theirs. On the larger ground of Teac Oval Ireland might have enough to win, the main doubt being the huge let down of not making the Grand Final to defend their title, plus a suggestion they might play some of the lads that haven't had much of a run thus far. Assuming that isn't the case, Ireland to win a hard and tight affair.

So to the big one at 4:30pm at "the G". New Zealand have looked very impressive winning their five games by margins of 34, 102, 72, 71 and 32 points. Although their draw was relatively easy, some of the sides they have crushed have been very competitive and it's fair to say that the Kiwis have yet to work as hard as they can. Their coaching staff are confident they have another level left in them. 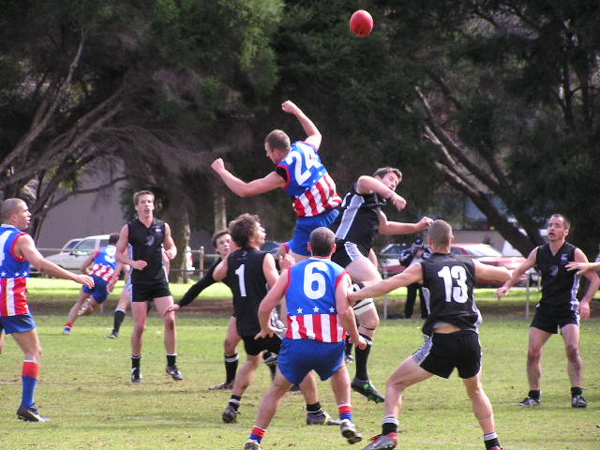 PNG on the other hand have had several close calls. Their margins have been 17, 14, 45, 1 and 9 points. The question is whether the narrow margins were the best they could do or whether they have another gear and have simply been doing enough to ensure their wins. That's the theory of at least some in their camp, who are confident that as they are challenged by New Zealand the Mosquitoes will lift to a whole new level. If that is the case we should see the best match yet of international Australian football. Based on the secure game plan of the Kiwis and the slightly erratic nature of the way the Papuans have played so far, favouritism must go to New Zealand. Their strength and height will worry PNG, although Australia's northern neighbours will have more pace and flair. It should be a fascinating game of contrasting styles and a treat for all who make the effort to get to the MCG to see the match.