On Thursday 11th August the AFL hosted a dinner in the Victory Room at Telstra Dome to celebrate the 2005 International Cup. With the who's who of international football and the AFL attending, there were awards given out, a FOXFooty segment, cultural performances by some of the competing teams, and a general feeling of goodwill as players and officials mixed at the informal end of the night. Below are photos from the night and the official AFL press release listing the awards.
Last night the 10 nations competing in the 2005 AFL International Cup celebrated the success of the event at an official dinner hosted by the AFL. Over 600 guests were in attendance including His Excellency, Anthony Mongalo, High Commissioner Republic of South Africa, the Hon. Justin Madden, MLA – Minister for Sport and Recreation and Minister for Commonwealth Games Victoria, Mr Ron Evans, Chairman AFL, Mr Andrew Demetriou, Chief Executive Officer AFL, Mr Bill Kelty, Commissioner AFL, Bruce Billson, Parliamentary Secretary for Alexander Downer, Minister for Foreign Affairs and the consul generals from all 10 nations. 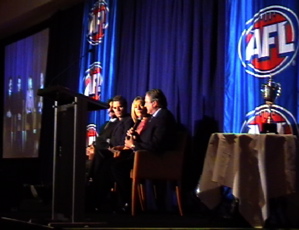 A highlight of the event was the announcement of the 22 players named as the 2005 Australian Football International Cup All Stars Team. As well as being recognised for their performance the All Stars Team were presented with a commemorative jumper and congratulated by Essendon Coach Kevin Sheedy on their outstanding achievement.


Other awards presented include:

A tie between Fia Tootoo – Samoa and Navu Maha – PNG.

2005 Australian Football International Best Player from each Country (as chosen by each nations management team):


Kevin Sheehan, National Talent Manager AFL and Chairman of Selectors for the All Stars Team profiles the 22 players:

NAVU MAHA – Papua New Guinea
172cm, 80kg, 31 years Club: Central
Very creative player who mops up in defence and can play midfield or forward. Keeps his head over the ball. Kicked the sealing goal to get PNG into the Grand Final. Second time nominated for the All Stars Team. Joint winner of medal for 2005 Australian Football International Cup’s Best & Fairest.

RICHARD BRADLEY – New Zealand
186cm, 82kg, 22 years Club: Eastern Blues – Christchurch
Strong mark and courageous key forward who proved a terrific target for his team inside 50 metres. Features with some of the top contested marks of the series. Kicked 12 goals for the championships.

CRAIG ASHTON – New Zealand
185cm, 79kg, 21 years Club: Takapuna Eagles
Lightly built but extremely courageous and strong marking forward who was a consistent avenue to goal. Capped off by four goal performance against the USA helping his team into the Grand Final.

DONNIE LUCERO – USA
188cm, 92kg, 35 years Club: Orange County
Captained his country and played consistently in defence being strong overhead and a good kick. Ex-Marine who has seen active service for his country.

MICHITO SAKAKI – Japan
165cm, 68kg, 20 years Club: Samurais
Small midfielder who played with tremendous heart for his team winning many possessions and hitting his targets with hand and foot. Outstanding all series including against Great Britain where he virtually set up all his teams goals.

STEVEN MALINGA – South Africa
171cm, 66kg, 21 years Club: Itoseng
Small forward who showed tremendous courage not only in the air, but at ground level and when the opposition had the ball. Takes spectacular marks, and kicked some team-lifting goals including 5 goals against Spain. Tackled bravely all championships for his team and played with great heart.

ROB BURGESS – Great Britain
180cm, 80kg, 28 years Club: Wandsworth Demons
Accumulated many possessions for his team in the midfield and also read the play well cleaning up across half-back. Fine contributor and hard worker throughout the Cup.

JOSE FRANCISCO LORENTE – Spain
178cm, 80kg, 19 years Club: Madrid Bears
Hard working inside midfielder who lead the Bulls on-ball brigade with desperation and energy. Studying law in Spain as a result of his relationship with Spain’s coach Jeff Callow – who himself practices law.

FIA TOOTOO – Samoa
187cm, 93kg, 28 years Club: Moorabbin Kangaroos / Fasitoo-Uta Tigers
Strong marking key position player who provided a target up forward when needed for his team or a physical presence on-ball and in defence. Star in the first International Cup for his country in 2002 and backed it up again with some top performances being a joint winner of the 2005 Australian Football International Cup Best & Fairest medal.

ROB McEWAN – Canada
183cm, 85kg, 33 years Club: Windsor Mariners
Medium midfielder who is strong in the contest and sent his team forward on many occasions. Played an excellent game for his country against Ireland in his best performance. School teacher in Windsor.

PAUL LOGHANNE – Canada
180cm, 78kg, 31 years Club: Mississauga Demons
Skilful rover who has good game sense and smooth skills. Has the ability to find space which could be attributed to spending some time in Ireland playing Gaelic football. Excellent against Samoa. 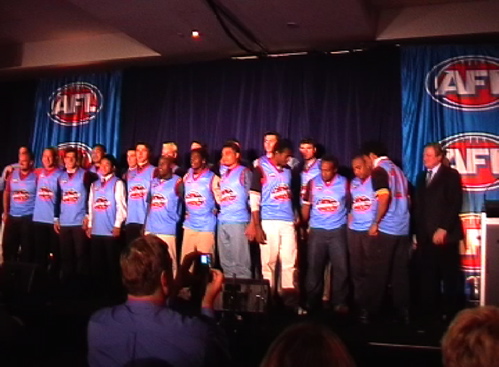