Geckos Right At Home In The Bali 9's

As a nine a-side competition played on a small soccer field, it also offers a different but, according to Geckos' coach Peter Muir, exciting playing experience. "It's a fun style of footy to play, fast and flowing. It's easy to go into attack from the centre bounce or running the ball out of defence, but as soon as the ball is turned over it can really cost you."

The Bali 9s is also special because, since the 2002 Bali Bombings, The Geckos have used the Tournament as an important means to contribute to the local Balinese community. Each year the Tournament helps raise money for the charitable organisation, Yayasan Kemanusiaan Ibu Pertiwi (YKIP). Additionally, by attracting touring teams, particularly from Australia, the Bali 9s Tournament gives a small boost back to the Bali economy and helps combat the negative, largely media-driven images of Bali that have seen many Australians reluctant to travel there over the last few years.

Below is attached the Official Press Release from the Bali 9s Tournament kindly supplied by Peter Muir of the Bali Geckos.

9 October 2006 - Hosts Bali Geckos proved too strong for visitors the Malaysia Warriors in a nail biting final at the 2006 Bank Commonwealth Bali Nines Australian Rules Football Championships last Saturday. With scores even until the final minutes of the game, the Geckos managed to score a goal in the last 30 seconds, and then another as the final siren rang to win by 14 points in front of hundreds of excited spectators.

Held at the Canggu Club, Bali's first private members' sporting and recreational club, the tournament was also participated in by the Jakarta Bintangs and a second Bali Geckos team and follows specially modified rules unique to the event.

After the final, Geckos Coach Peter Muir praised his players for their efforts, as well as acknowledging the opposing teams for what was a well contested tournament.

During the day, the crowd was also entertained by a number of netball games between Bali based teams. A junior football clinic was also a part of the event, where participants received lessons on the basic skills of the game and were given a free football.

During the presentations, the Bali Geckos, in association with the Canggu Club, donated US$300 to Yayasan Kemanusiaan Ibu Pertiwi (YKIP). Established in the wake of the 2002 bombings, YKIP is involved in a number of charity programs, including paying school fees for the children of bomb victims. "We have long been involved in assisting local charities through our donations to Yayasan Sri Kandhi and look forward to helping out both these organizations in the future" said a club spokesperson. They added that the Geckos are also currently planning a program to teach Australian Rules football to teenagers at an orphanage in the Kuta area.

Although this year's tournament had a number of teams, all from Australia, withdraw from participating for various reasons, the Geckos will continue to develop the Bali Nines event. This development includes the Bali Nines Masters event, which has an additional requirement that all players be aged 35 years or more. The third annual Bali 9s Masters will be held at the Canggu Club on March 17, 2007. 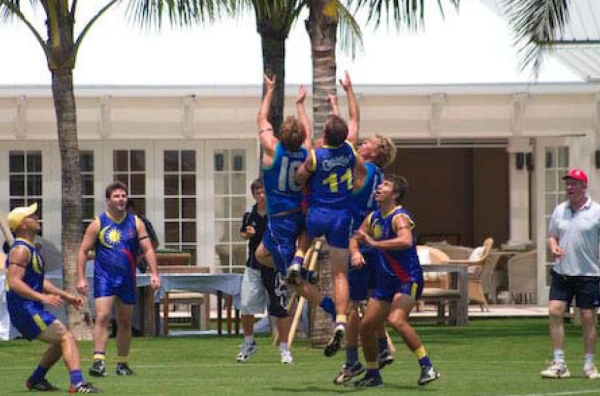