Bombers soaring on the Tiwi Islands 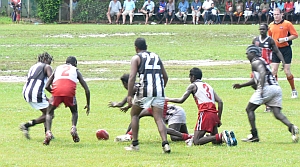 Football on the Tiwi Islands[*1] is one of the biggest success stories for the sport of Aussie Rules. The history of the sport on the island also tells the story of how difficult, yet eventually rewarding it can be to find pathways to the elite level, a path that countries like South Africa and Papua New Guinea may one day follow. The Tiwi Islands may be officially part of Australia's Northern Territory[*2] , but the 2,600 indigenous inhabitants of Bathurst and Melville Islands 80 kilometres north of Darwin consider themselves simply "Tiwis", distinct from Indigenous Australians. With the isolation from the mainland, Tiwis developed a unique culture, they speak Tiwi[*3] , have their own government[*4] and proudly wave their own flag[*5] . But since 1942, an important part of their culture has also been the sport of Australian rules football.

Northern Territory and Tiwi Islands football is an example of how your place on the globe can effect the way football is played. In the tropics there are two seasons, the wet and the dry. In the dry season, the hard grounds can cause injuries, so Aussie Rules in the NT is played in the wet season (October to March) right in the hottest and most humid time of year. But this doesn't discourage the players who pull on the jumpers while AFL players are on their end of season trips and play their finals when AFL players are still in pre-season training.

When the Tiwi Islands Football Club, a new expansion side in the Northern Territory Football League[*6] took to the field a month ago in their first official NTFL match against St Mary's the crowd at Marrara Stadium[*7] , some 4500 strong, were at hand to witness history as the first all-Indigenous side in a major Australian football league competition.

Football was introduced to the island by a missionary brother John Pye (who is still alive today although almost 100 years old). Originally from Melbourne, Pye was transferred from Toowoomba after a 10 year missionary tenure in 1941. Having grown up with the game, he started introduing kids to the concept of kicking around a bunch of rags. Within a few years of the first footballs arriving the sport had grown to a fervour unmatched anywhere in the world (with the possible exception of Nauru, an actual country which has Aussie Rules as its national sport). Today, with 900 participants, the Tiwi Islands has the highest participation rate (35%) in Australia. The Tiwi Islands Football League Grand Final[*8] regularly attracts up to 3,000 spectators. It also attracts boatloads of Australian tourists who flock to see the Tiwis legendary skills and meet the friendly locals, making it the biggest event on the Tiwi calendar and a big part of the island's tourism industry.

The St Mary's Football Club[*9] in Darwin's Northern Territory Football League (NTFL) was formed in 1952 to give Tiwi Islanders who were working in Darwin for the Armed Services to play football. The club filled a niche as at the time no other NTFL team would allow "full blood" Indigenous Australians to play in their team. St Mary's became the NTFL's most successful club winning 24 League Premierships. Athough today Indigenous players are a big part of all NTFL clubs, St Mary's continue to provide opportunities for players from diverse backgrounds such as Goaner Tutlan[*10] (as reported in The Age in 2004[*11] ) to make the grade.

The Tiwi Island Football League was established in 1969 with four teams. For years, the Tiwis have had aspirations to represent the island at elite VFL/AFL level and through St Mary's and other clubs to a certain extent they have. Some players who had ties to the islands became household names in Australia - Maurice Rioli won the Norm Smith Medal with Richmond and Michael Long played in a premiership team with Essendon. The Rioli family became a football dynasty. Yet VFL/AFL representation for TIFL players remained elusive for decades. David Kantilla, a full blooded Tiwi TIFL export became a legend in the South Australian National Football League (SANFL) but never crossed to the then VFL whilst other players made an impact in a slightly less competitive WAFL.

The Tiwi scene heated up when Tiwi Islands Football Club were formed in 2005 with an aim of competing in the NTFL, which is the Northern Territory's elite competition. The NTFL is considered to be one of the top semi-professional leagues in Australia behind the AFL, SANFL, VFL, WAFL and Queensland State League. Rather than being offered a spot in the league, the NTFL granted the club the opportunity to trial for half a season to test the financial viability and onfield competitiveness of the new club. As part of the trial, the NTFL provided temporary access to Tiwis currently contracted to other NTFL clubs, but as the Bombers could not compete for the premiership. This year, before taking the field, the club affiliated with Essendon Football Club[*12] , the "Bombers", who donated jumpers and recruited retired AFL footballer Dean Rioli[*13] and Tiwi Islander as a marquee player. The Tiwi Football Club officially became the "Tiwi Bombers", a name which seems strange for the Tiwis since the Japanese flew bombers over the island in their raids of Darwin and one even crashed there.

Whatever doubts surrounded their competitiveness and lack of height were quickly dispelled after their debut. The Bombers won their first match convincingly and stunned all with their explosive pace and exciting "play on at all cost" style. The Tiwis went on to win all but one of their matches and some of the victories became embarassing for the local sides. Due to the large amount of interest, all NTAFL games featuring the Bombers games have been broadcast nationally via digital broadcaster ABC2 and commentators and the media consistently branded them the "Harlem Globetrotters of AFL football". The club is now awaiting a decision on their entry into the 2007/08 season. With the benefit of a wider audience for the NTFL, it seems very likely that this will happen.

But the success of the Tiwi Bombers transcends football. There are social problems on the island, like high suicide rates[*14] , drugs and alcohol abuse causing the average life expectancy to be around 48. One of the primary sponsors for the Bombers is an organisation known as 'Tiwi for life' aimed at recognition and awareness of these issues. As reported by the Sydney Morning Herald in their article A team in big league kick-starts hope on troubled Tiwi islands[*15] , in the six months after introduction of the Tiwi Islands Football Club, it was reported that not only did suicide rates drop, but the already high participation rates on the island increased dramatically. Football is seen as an avenue to success by many kids.

The prospects look bright for the Tiwis since the advent of the Bombers. Malcolm Lynch, a Tiwi Islander who relocated to Sydney to attend school and one of the Flying Boomerangs[*16] was recently selected by the Western Bulldogs in this year's AFL Draft. Interest was high this year for young Tiwi Bomber Austin Wonaeamirri, an 18-year-old back flanker who attended various AFL recruitment training sessions. Unfortunately for the Bombers, the exposure of their talent on the big stage has already resulted in some TIFL players being poached by other NTFL clubs before the Bombers can even contest the flag.

Proximity to the Australian mainland certainly helps the Bombers, but there are football playing countries that are in close proximity to Australia. With travel becoming more accessible, some Australian regional leagues have been expanding offshore, like the Tasmanian Devils[*17] in the VFL[*18] and the Bombers in the NTFL whilst others are looking to expand their profile interstate and overseas (as reported in WFN's West Australians to play match in Mumbai, India[*19] article). With the AFL unlikely to expand further in the coming years, perhaps the key to escalate football development in Papua New Guinea, Indonesian, East Timor or New Zealand is for them to someday field a side in an Australian regional league such as the Queensland State League, NTFL or AFL Cairns. Papua New Guinea is certainly developing pathways, with many players running around in Queensland competitions. With a relatively small number of players, Tiwis have experienced success at all levels of Australian rules competition. With a new generation of players and a homegrown talent like Mal Michael or Damien Cupido, there is no reason why another country cannot one day do the same.

Those in Australia can catch the final match of the Bombers 2006 NTFL season against Southern Districts on ABC2 this Saturday[*20] .