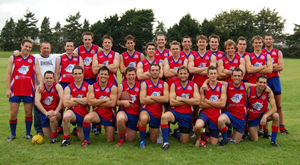 The British Bulldogs[*1] defeated the Irish Warriors[*2] by ten goals in Dublin last weekend, the first Aussie Rules test match ever held in Ireland showing both a markedly improving Bulldogs squad and a Green Machine slipping from its heyday of International Cup glory in 2002.

With both sides looking towards next year's International Cup, the balance of power in the British Isles could be moving eastwards. The Bulldogs destroyed all comers in the Manchester tournament held a few weeks ago, and still have a match to come this year against the ARUK England Dragonslayers. Ireland conversely hasn't put a national team on the pitch since last year, although they'll be straight back into it this weekend with a match against Denmark in Århus.

This report courtesy of the BARFL's Martin Smith.

The Great Britain team has been going through a major rebuilding phase which saw eleven new faces in the squad of twenty-four to take on the Irish Warriors in Dublin. The two previous games between these teams has seen Ireland get off to a great start and Great Britain try to play catch up football resulting in victory to the Warriors on both occasions. The Great Britain team came into this game riding on a high after their clean sweep at the Manchester Cup, but would now be tested at a whole new level by the highly-rated Warriors.

The first quarter started with both teams attacking the ball hard and setting the frantic pace that was to last the entire game. An early blow to Great Britain was Captain Jonny Boyle badly twisting his ankle in the first two minutes, but in his proven gutsy style, he stayed on the ground and ensured that the young Great Britain team stayed focused and organised. Ireland kicked the first goal of the game, but it was to be their only score for the quarter. Andrew Grubb in the last line of defence constantly repelled the Irish attacks, passing the ball up to Paul Manly and Robert Chamberlain, who delivered it to the Great Britain forwards to attack the goals. Great Britain scored a couple of minors and then Harry Zalk broke through to score the Bulldogs' first goal.

The second quarter was an intense battle with every player on the ground showing guts and commitment as they put their bodies on the line. Both backlines worked overtime as they repelled attack after attack and the midfielders ran themselves ragged as the ball was continually moved from one end of the ground to the other. Tackles were fierce and both sides had trouble getting free movement of the ball. Ireland kicked the only goal of the quarter and the scene was set for an exciting second half as the teams went into the long break with only one point separating them.

From the opening bounce of the third term, Great Britain took their game up a gear and started out-running the Warriors. Damian Holland kicked a goal for Great Britain, followed by one from Barry Malone, and another from Andy Whiteaker. Frustration started to creep into the Irish team as Great Britain kept their foot on the gas by out playing and out running their opponents. Paul Harris goaled, then Sam Wood kept the pressure on with a trade mark goal from deep in the pocket followed by a wrong foot goal by Tony Keany.

The final quarter was played with the same intensity as the first three. Both teams gave 100%, with all players putting their bodies on the line. The Warriors were desperately trying to salvage the game and the Bulldogs were determined to finish them off. Two goals by Richard Lucas, followed by another one from Malone saw the Bulldogs take the game out of reach of the Warriors. In the dying minutes of the game Lucas scored another goal and the Bulldogs ran out ten goal winners.

The Irish did themselves proud, fighting the game out to the final siren whilst the Bulldogs showed that their development is on the right track as they enter a new era.