Round 2 of the this year's Changi Cup takes place at Alice Smith International School in Kuala Lumpur on 23rd August, 2008. 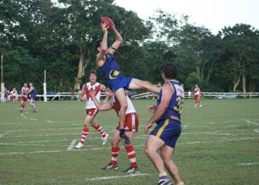 The Changi Cup is a best-of-three matches competition between Malaysia and Singapore[*2] and is one Asia's older football competitions having been played every year since 1997.

Historically Singapore have been dominant, winning every year until 2007 when the Malaysian Warriors triumphed over the Wombats on November 3rd, 10-7-67 to 6-4-40 to win the rubber 2-1 and take the Cup for the first time.

With the Changi Cup on the line and the Asian Championships looming on September 6th, no quarter will be asked or given in this upcoming encounter between traditional rivals.

The Warriors have been very hard to beat at home in recent years and coach Matty Black is sure to have his charges fired up for what promises to be a cracker of a game and we will bring you a full write up on worldfootynews.com

Further details on match day arrangements can be found on the Malaysia Warriors website[*1] .