WFN caught up with one of the Columbus Jackaroos founders, Chet Ridenour. While his club is in the midst of their second season he is travelling South and Central America. Ridenour presided over the rapid foundation of an Aussie Rules football club that managed to win their first ever match, and bring a breath of fresh air to the US footy scene. In the interview we discuss Chet's football journey, what went into forming the club, recruiting, football stories and much more.

The podcast of the interview can be found here[*1] .

Following is the Jackaroos write up of their away match (referenced in the interview) against the Baltimore Washington Eagles from June 13.

After a series of matches had been cancelled by Jackaroos opponents, coach Scoota sent out an open challenge to many clubs across the country. The Challenge: Have the newest and coolest footy team in America come into your back-yard for a day of Aussie Rules carnage. The challenge was answered by none other than the number one team in USFooty, the Baltimore/Washington Eagles.

After a seven hour trek across the Appalachian Mountains, the initial Eagles strategy became clear: host the match in a somewhat unnerving part of town. The locals were almost as befuddled as the Jackaroos were heading to the ground, as co-captain John ‘Fishsticks’ Fisher overheard someone wonder out loud what we were doing in their (neighbor)hood. After Anish ‘Black BMW’ Mistry and the rest of the gang found their way to ground, the Eagles had a curtain raiser metro game going on. The two sides in action gave the Jackaroos confidence, as Chris ‘Cici Ya Later’ Sparks noted: ‘Now those guys we could’ve taken.’ Shortly after the Jackaroos took the field for pre-game warm-ups and the match was underway.

Or, at least the whistle blew and Hurricane Baltimore Footy swept across the field as the Eagles pounced on the Jacks from the get-go. Score upon score of Eagles rushed forward as the Jackaroos defense, led by Brian ‘Rookie Sensation’ Turpey, was under siege. The only Jackaroos score of the first quarter came courtesy of a Santosh ‘Brown Magic’ Nachu poster and at quarter time the score showed the Jackaroos trailing by close to forty points.

Coach Scoota gave the Jacks a good old fashioned talking to at quarter time and the boys responded with the tenacity of a large jungle cat. Clyde ‘The Glide’ Simpson began to deliver crushing hits in the midfield and the defense gelled well. Matt ‘Soon to be Mrs’ Reiss, Alan ‘B-Cup’ Gardner and Evan ‘Billabong Bars Best’ Gardiner threw themselves at the ball and salvaged many a Jackaroos’ pride. Rob ‘Mad Hops’ McFarlane was dominating in the Ruck and the first Jackaroos goal of the day was scored by Joe ‘Golden Bear’ Herrbach.

After the half-time break the Eagles came out with renewed vigor and began wailing on the Jackaroos behinds again. Outstanding players like Aaron Tyndall, RJ Wheelock and former Revo coach Denis Ryan simply cut the Jackaroos to pieces through the middle of the field. Brandon ‘British Columbia’ Crowe and Josh ‘Cut off Dickies’ Matko both threw themselves hard into the contest on many occasions and the Jacks suffered injuries to first gamer Doug ‘That’s not a Knife’ Hoblet and Wes ‘Man Scent’ McCorkle. At the final break the Jacks trailed by around 70 points.

In the last quarter plays began to come together for the boys from Cowtown. Rob McFarlane scored a goal on a nasty 60 yard bomb. ‘Big, Bad’ Brad Dailey crushed an opponent’s soul with a bone jarring hit for the ages. Forwards Rob ‘TO sized’ Ward and JP ‘Bundy Rum’ Culgan began to get touches and the Jackaroos looked much more confident. Even coach Scoota showed a glimpse of the Jacks potential with a quick goal from a snap late in the game. The Rookie himself topped his game off with an academy award winning performance in gaining a free kick.

The Jackaroos may have gone down by 84 points in the game but the steps the side took cannot be overlooked. Many players took strides in the game and the benefits of playing a side such as the Eagles cannot be understated. After the game, the boys headed out for a night on the town and again captain Fisher would come in close contact with the locals. One was even kind enough to offer him various incentives to ‘split a track’ with him. John looked more confused than a cow at McDonalds after that interaction.

Nonetheless, it was another fine trip for the Jackaroos who continue on their journey to be the greatest team in the USFooty universe. 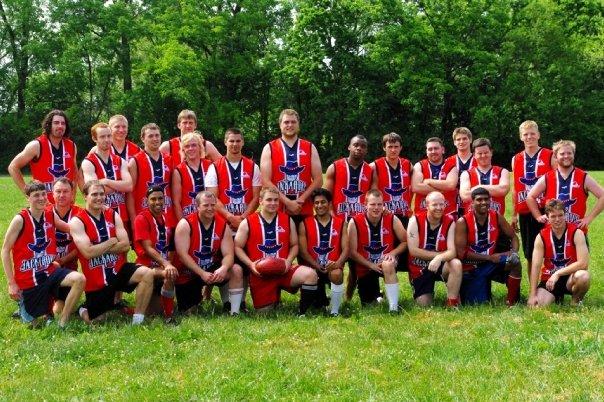