Since the U16 national squad, the Kurakums, first showed the world they could play by finishing 3rd at the Queensland State U16 Youth Girls, female football has developed considerably in Papua New Guinea. Long known for their strong Youth Girls players, today PNG also has its own senior women’s leagues and they are excited to be able to put a women’s team, the Flame, into this year’s International Cup Women’s Division.

The men’s team, the Mosquitoes, have done considerable well in the International Cup and now the women of PNG will have the same experience competing at international level. With confidence and experience from playing on par with Queensland’s best, the team is confident that like their male counterparts, they are the best in the world.

Jo Butland has an impressive sports career, starting as the Mathilda’s goalkeeper (Australian wome's soccer) from 1997 to 2001 before switching to football, where she has been selected several times and picked as captain for the Queensland and All-Australian teams. She was again selected for the 2011 All-Australian team.

Pint Kar has played Australian Football since the age of 14 and has plenty of experience of international football from coaching the PNG team at the Oceania Youth Cup and as the co-ordinator of the AFL PNG Academy. 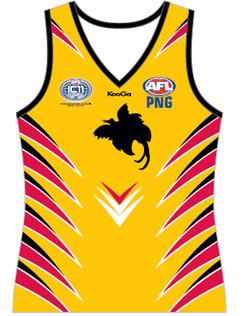 Papua New Guinea is a country in Oceania, located on the eastern half of the island of New Guinea in the southwestern Pacific Ocean. The other half of the country is (sometimes controversially) part of Indonesia. The capital of PNG is Port Moresby. PNG is divided into four regions, and is sub divided into 18 provinces, the autonomous region of Bougainville and the National Capital District.

PNG is one of the most culturally diverse countries in the world with over 850 different languages and cultures, though the population is comparatively small, at just 6,732,000. The population density is 14.5 per square kilometre, under half of that of the USA, and most people live in rural areas.

During World War 1, the southern part of New Guinea, named Papua, was occupied by Australia. After the war it was considered separate from New Guinea, even though both were governed by Australia. Peaceful independence from Australia happened in 1976, and Australia remains the largest bilateral aid donor to PNG.

Sport is an important part of PNG culture. Rugby league is the most popular sport and many players become instant celebrities if they represent their country by playing in an overseas professional league. Other major sports are soccer, rugby union, cricket, and of course Australian Football, which was introduced during Australian occupation. Football has experience considerable growth over the past decade and PNG boast the second highest number or players outside Australia. The game’s popularity has increased again recently with the recruitment of PNG born player Mal Michael and PNG descent player James Gwilt into the AFL.

The PNG national Australian Football team, the Mosquitoes, won the last International Cup in 2008 and the team is one of the favourites to win the men’s competition this year too. Riding on this and the U16 girls team, the Kurakums, success in Queensland, the PNG Flame women’s team are also expected to perform well in the women’s division.


The Story of Women’s Football

Australian Football has been played in PNG for over 100 years but became more popular in the 1940s when promoted by Australian schools teachers and defence force personnel living in Lae and Nagada. Within the last decade the popularity has exploded and there are now 10 AFL centres throughout the country. Unlike many other countries competing in the International Cup, Australian Football is very popular in PNG and is watched by thousands of people.

Australian Football was introduced to U13 and U15 girls in PNG in Match 2005, and in October of the same year there was an U15 Girls Division at the National Youth Carnival. There was such a positive response to the introduction of the girls that from the 2005 Championships a national U16 squad was selected and named the “Kurakums”.

In October 2006, the PNG U16 girls team, the Kurakums, became the first females to represent PNG in a contact sport when they were invited to take part in the Queensland State U16 Youth Girls Championships in Cairns. The girls were extremely successful in their inaugural tour, finishing 3rd, and four of their players, Anita Ani, Naomi Aloa, Manda Ipat and Sylvia Kotapu, were selected for the Queensland State U16 All-Stars team. The popularity and success of the Kurakums in Queensland means they have been invited back every year to take part in the State Championships.

In 2007, on their return to Queensland, the Kurakums went one step further, returning to PNG as Queensland State U16 Youth Girls Champions. They did not lose a single game throughout the tournament and the only team to score against them was the team they defeated in the finals, Cape York. Nine of the girls were selected for the All-Stars team, including captain Sylvia Kotapu, All-Star from the 2006 squad.
Last year, despite the huge rise in popularity of women’s football in Queensland and subsequent improvement in the level of the game played there, the Kurakums again put on a terrific performance at the U16 Youth Girls State Championships in Cairns, finishing 3rd. The Kurakums also had injury problems, losing one of their best players, Deborah Paulus, in the first game. Despite this, they defeated Gold Coast, Central Queensland and Cape York comfortably, just losing by three points to North Queensland, before being defeated by Brisbane, a region with an established and successful Youth Girls competition, integrated into a strong senior women’s league.

Today, in addition to over 2000 girls playing in Youth Girls teams, there are 15 senior women’s teams playing in three leagues. In addition, AFL PNG also provides a pathway for ex-Kurakums to continue their careers in Australian Football as umpires and employees. The Kurakums and the IC11 Flame squad are also coached and managed by female officials.

The PNG Flame are going to be coached by one of the most experienced sportswomen in Australia and one of the most experienced Australian Football players in PNG. Pint Kar has plenty of experience coaching young players, including PNG’s 2010 Oceania Youth Cup team, and Jo Butland has captained the All-Australian team. In addition, her experience from soccer as the Mathilda’s goalkeeper will help to prepare the girls for the different skills set they will face when competing against girls from North America and Ireland.

Many of the Flame players are ex-Kurakums and they have plenty of experience playing football in Australia. The Flame are going to be confident going into their matches against the Australian Multicultural/Indigenous team, a team of girls playing every weekend in Australian leagues, who might be intimidating to less experienced players. Their international experience will also give them confidence facing teams which have not travelled much. They might however be overcome by the skills some of the other players are bringing in from different sports, especially the Irish team who have a lot of women with Gaelic Football backgrounds.

The PNG Flame are also a very young team, with many of the players coming from the Youth Girls teams. Despite the experience these young women have, the lack of senior women’s teams players will definitely count against them. The girls are undeniably quick paced and have good skills, but their small average height might be problematic, especially when facing taller, larger players. Though the difference in average heights between the women’s IC11 teams is notably small, body size counts for a lot on the field. But this might well be overcome by the confidence the coaches have in their players that the Women’s Division will be won by them.

Sylvia Kotapu has played with the Kurakums since 2007 and was selected for the Queensland All-Stars team. She is one of the most experienced players in the Flame team and will definitely help to shape the young Flame team into a formidable opponent. She is also a qualified umpire and has umpired in the Regional Championships.

Lillian Barnabas is another experienced player. At 20 years old, she is one of the oldest players on the Flame team. She is a tough defender and her strength and fearlessness will be a keystone of the Flame’s defence. She is also AFL PNG’s female football co-ordinator and was the coach of the 2010 Kurakums team.

Taiva Lavai is a young player but what she lacks in experience she makes up for with speed and stamina. She is a skilled player and was one of the best players in the 2010 Kurakums team. She was also chosen as one of the 2010 Queensland All-Stars.

Joycelyn Tatsie is another young but talented player who has won her place in the Flame squad. She was also chosen as one of the Kurakums best players in 2010 and selected for Queensland All-Stars team. 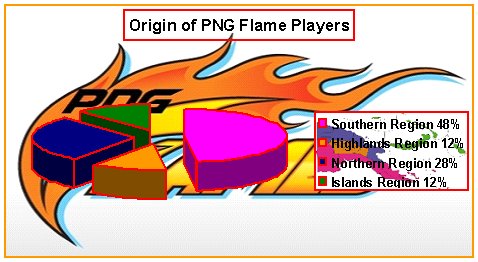 Given the successes of the Kurakums’ in Australia and the experience of their coaching team, the PNG Flame are very much on fire. Though they won’t have as much experience as the Australian girls who play every week at senior level, the Youth Girls have proved from the very beginning in Queensland that they can rise to any occasion. So long as the unusual styles coming in from ex soccer, Gaelic Football and American Football don’t surprise them, these girls have the potential to go all the way. Added to that the assuredness transferred from the strength of the formidable Mosquitoes men’s team that both PNG teams will be taking home the International Cup, and these young women of the PNG Flame will be the team to beat at the International Cup Women’s Division. 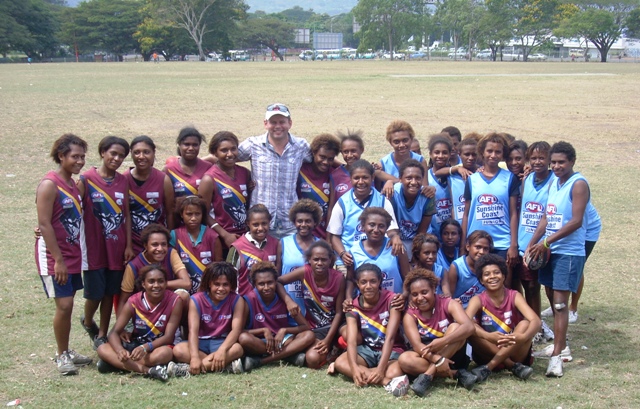 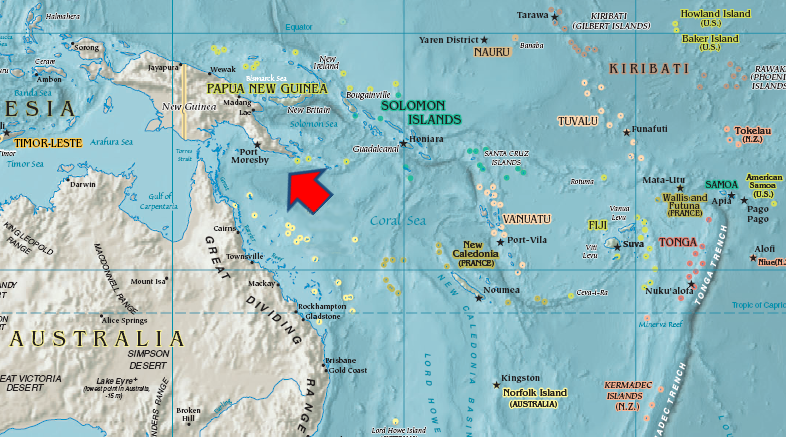