The birth and growth of AFL in the Solomon Islands

As Nic Naitanui and Israel Folau have become household names across Australia, eyes are swiftly turning to the Pacific as the next frontier for international AFL talent. Eddie Burton, the AFL’s Development Officer in Solomon Islands talks to a group of young players leading the charge of AFL in a country that just eight years ago was on the brink of collapse.

Solomon Islands, a nation of over 500,000 people, is now back on its feet following the arrival of the Australian-led Regional Assistance Mission to Solomon Islands (RAMSI) in 2003. The nation of over 900 islands, in which soccer has traditionally been the number one sport, has recently seen a period of unprecedented growth in AFL.

In 2003, a RAMSI officer and AFL fan, Garry McKenzie caught a taxi driven by the local Pastor of Namoliki, a small hillside community in the capital city of Honiara. He and the taxi driver began talking about AFL and the taxi driver, Pastor Thomas Joel asked Mr McKenzie if he could provide his sons with some basic lessons in the sport. The rest, as they say, is history. I spoke to Pastor Tom about this first meeting.

“When he (Garry) first arrived with RAMSI I was driving him in my taxi, he liked AFL and I asked him to come and coach my boys in the basics of AFL as they were all interested,” said Pastor Tom. “When the community saw my boys playing AFL, they wanted to be involved too. As I was a Father to all of the community, I wanted them to learn the game too, so I asked Garry to come back and coach. He was a good friend and we used to go to his house for dinner and he would ask me to drive him everywhere.”

He says the sport of AFL has made a huge difference in the Namoliki community, one of the poorest in Honiara.

“The main reason I wanted my community to play AFL is to help young people stay away from the problems of drugs and alcohol in Honiara, especially on the weekends. I am very thankful to everyone from Australia who has continued to coach my community and feel really proud for the four players who have been able to play in Australia.”

Pastor Tom’s son, Anthony Joel, is one of the nation’s AFL prodigies, and recently travelled to Australia for the first time to represent the South Pacific region in the NAB U16 National Championships. His is clearly a family of potential AFL stars, older brother Philip is one of the best talents in the Solomons and a well known singer, and up and coming younger brother Junior recently travelled to Australia to represent the region.

In reflecting on growing up in Honiara and his eight years playing the game, Anthony Joel says AFL has helped shape the potential for young people across his community.

“We have a big family, 7 boys and 1 girl, and our family has struggled with financing school fees and supporting us all through school,” he explained.

“But AFL has been very good for me. If you’re not busy or involved in sport you can fall into rubbish activities like crime. Because of sport and school, I’ve not got involved with my friends in these bad activities. I’ve learnt from others, and sometimes other people learn from me. Sometimes I make mistakes, but nothing spoiling my life. I’ve learnt leadership skills and that young players are now looking up to me.”

He says representing Solomon Islands at the South Pacific Cup, held in December in Tonga – where Solomon Islands upset the far more fancied New Zealand – was one of the biggest moments in his young life.

“I wasn’t expecting to make the team, but being selected was a big honour. I played my best and I was proud of the way I played and I did so for my country.”

He adds that seeing his teammate Freddie Una, one of the Solomon Islands star players, who was selected to play in Australia in 2010, was a major motivation for improving his training.

“After seeing Freddie go to Australia I realised I had good potential and talent for this game, but I needed to improve. I watched others around me and learnt.”

It obviously worked. Anthony Joel was the only player picked from the Solomon Islands for the International Cup tournament held in Sydney in July, which saw him lining up alongside players from across the South Pacific region. Observers note that he plays with a lot of heart and leads the running handball game that makes Solomon Islands so dangerous to opposition teams.

“Anthony improved significantly over the 2 weeks,” said AFL Asia Pacific coordinator, Andrew Cadzow. “His leg speed, evasion and goal sense was of a very high standard, and his ability to really work hard defensively was a credit to him. Anthony will now go back to the Solomon Islands ready to assist others. The South Pacific victory over a traditional AFL state (Tasmania) and their close losses to NSW and World squads have highlighted the talent and player pathway that now exists in the Pacific. This pathway will continue to expand at a rapid rate with players the calibre of Anthony coming through.”

“We have fast players here. We don’t have the height of some other teams, but we have our running game.”

Working as the Development Officer here in the Solomons, I definitely agree with him. I occasionally play in our competition and am a young, relatively fit player, but in Solomon Islands, I am constantly left looking like a puppy chasing a flock of birds that can fly away as they please. I would also add to his description that the players here have; tenacity, huge vertical leaps and strong team morals. The local people here in the Solomon Islands are amazing, they accept you for who you are and don’t mind a joke either, (as they say in the local pijin: “mifala just spoiling you Eddie, you no worry!”).

And I am working here with a very clear goal: to give more Solomon Islands youngsters a chance to play the game of AFL. With the Australia Network telecast, awareness of AFL has grown enormously in Solomon Islands, but many have not yet had the opportunity to play it. In my six months here over 1500 students and youths have learnt the skills of the game through ‘Solkick’, a similar model to Australia’s Auskick program. This nation now has a strong group of local players and a committed local coach, Job Vulita, who has been coordinating clinics and has now become the countries’ first local Development Officer.

Anthony Joel encapsulates the situation well: “I’d really like to see Solomon Islands as a country where everyone knows the game and loves it. I really think we have lots of potential to be future stars for the AFL.”

Anyone interested in supporting the game in Solomon Islands should contact edburton87@gmail.com or visit the Solomon Islands AFL page on Facebook. Without sponsorship support, there is simply no other way for young Solomon Islands players to have the opportunity to play internationally. 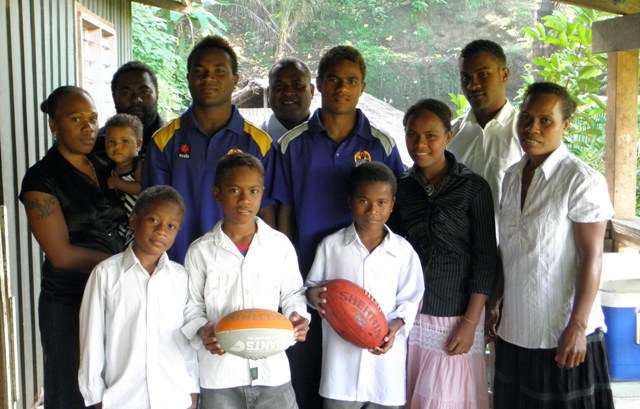 WFN thanks Eddie Burton for providing this article.