The schedule for the AFL Youth Oceania Cup.

The 2011 Youth AFL Oceania Cup starts this week.  Planes laden with excited young national representatives, in many cases flying overseas for the first time, are jetting toward Fiji.  The Vanuatu Volcanoes departed with coach Mal Thiel perhaps more excited than any of his charges as the Volcanoes set themselves for their international debut.

AFL International Development Manager, Tony Woods, has used the official ‘Footy Record’ for the Cup to reveal that the AFL Commission “.. has in recent weeks endorsed a plan that will see us (the AFL) increase our presence in the Pacific.”  Pointing out that it’s an exciting time for Australian Football in the Pacific region and recalling the first win by the South Pacific side earlier this year against an Australian state squad during the NAB AFL Under 16 Championships in Sydney.

AFL Asia Pacific Development Manager Andrew Cadzow reminds all of the opportunities that can flow on from good performances in the tournament:

And he provides a reminder too, that with 18 AFL clubs, there are up to 128 potential International Scholarships able to be offered.

Cadzow also points out the inclusion of a staff and volunteer Coaching and Administration Workshop, as well as assistance to the field umpires.  And also that an AFL Talent Pathway endorsement of the tournament by way of the inclusion again of an AFL Testing Combine for the best 40 players.

The format for the 2011 Youth AFL Oceania Cup sees a lightening format first day that will populate the draw for the remainder of the tournament.   There are 6 teams participating with last years debutant the Solomon Sharks unable to bring over a full squad.  Instead, this year, the Solomons have Javy Sare and Franics Ramo joining the neighbouring PNG Binatangs squad; also Job Vulita will take on the role of Team Manager.

The PNG Binatangs side is coached by Moses Kar and Walter Yangomina will perform the Assistant coach role.

The Nauru Stars are coached by Paner Baguga and Assistant Mallison Batsiua.  Team Manager will be Rayong Itsimaera.

The New Zealand Hawks will be coached by Mick Coultard, with assistants Warwick Kain and James Terry.

The Lightning Carnival component starts up on Tuesday (Dec 13th).  Teams are divided into 2 pools (A – PNG/SI, Tonga, Fiji ; and B – NZ, Nauru, Vanuatu).  Each team plays 3 games, against the members of the other pool.  As a lightening premiership day – there will be finals and a grand final.

Teams will be ranked 1 to 6 and placed in 2 pools for the remainder of the week.  The official opening ceremony will start proceedings on Wendesday at 10am, followed by the Flying Boomerangs taking on an Oceania U15’s followed after lunch by tournament games.

Friday sees the Combine Testing and Skills Sessions dominate the morning activities, followed after lunch by the South Pacific taking on the Boomerangs.

Saturday is finals day with the Grand Final set for 1.30pm followed by the Presentations and closing function that evening.   Sunday will see South Pacific and Oceania squad meetings and training sessions before a bonding excursion and final departure back home for all teams. 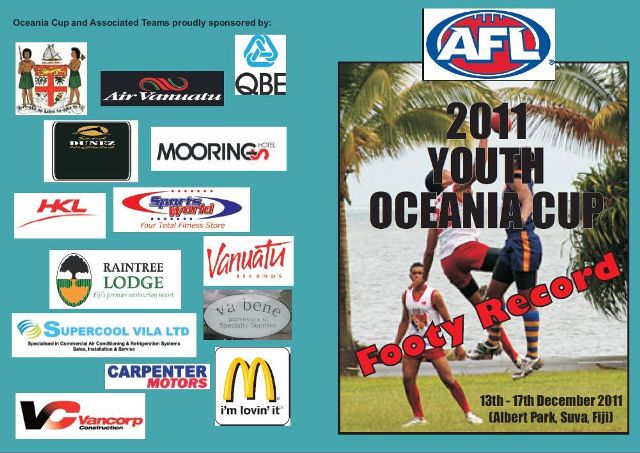