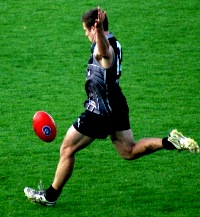 The AIS-AFL Academy will send a squad of Australia’s brightest future AFL stars to New Zealand for a nine day tour in January 2012. Pleasingly NZ are taking this incredibly seriously and have looked far and wide in developing their initial squad.

An amazing list of players with New Zealand heritage has been listed in the initial New Zealand squad in a move that will drive the AFL bloggers into a frenzy.

The itinerary will commence in Auckland and culminate in Wellington where the AIS-AFL Squad will play against the New Zealand Hawks at Westpac Stadium 12.00pm on Saturday January 28th .

North Melbourne Premiership legend and Fox Sport television commentator Wayne Schwass has agreed to assist with coaching of the New Zealand Hawks and he will be joined by former Port Adelaide star Don Dickie as well as current Hawks coach Justin Davies.
The unique bond that the former AFL stars Schwass and Dickie share with the New Zealand team is their heritage. Both were born in “the land of the long white cloud” and are prepared to acknowledge this with their involvement.
Another AFL Graduate, former Fremantle player Adam Campbell, will make the trip over from Sydney to show his allegiances and will be joined by Damian Hynes and Ash Duncan from the SANFL Club Central Districts, who also emerged from New Zealand to play at State League level.
Khan Haretuku formerly on St Kilda’s rookie list, will also trip across the Tasman to represent his country. Immediately on hearing of the initiative the St Kilda Football Club added their support by ensuring football staff would be in attendance for the game.
They are not the only past or current AFL stars with links to New Zealand. Gold Coast Suns code jumper Karmichael Hunt, Richmond’s Rising Star Dustin Martin, Hawk young gun Shane Savage, Port Adelaide Ruckman Brent Renouf were all forwarded invitations to attend and most recently drafted Western Bulldog Daniel Pearce is yet another born in New Zealand who continue to recognize their heritage.
Add to the mix Adelaide Captain Nathan Van Berlo and brother Jay based in Fremantle, whose parents are also born in New Zealand, and the future AFL football in New Zealand could be exciting.
Hawthorn Football Club has thrown their support behind the match with International Scholarship players Rhys Panui-Leth, Shem Tatupu and Kurt Heatherley also playing with the remainder of the team supplemented by the best available talent from the AFL New Zealand community.
The tour will see New Zealand showcase facilities in Auckland and Wellington with the young Australian Institute of Sport-AFL Squad visiting premier locations such as North Harbour Stadium, The Millennium Institute, Waitakere Trust Stadium in Auckland and Wellington Indoor Stadium, the Basin Reserve and Westpac Stadium in Wellington.
It seems that the race is on for the first AFL fixture outside of Australia and Wellington New Zealand could take on this challenge as early as ANZAC Day 2013.
AFL Pundits are well aware of Hawthorn Football Clubs current links with AFL New Zealand through the HANZ UP! Programme commencing in November 2009. The brain child of the then Hawthorn Football Manager Chris Pelchen and current Community Manager Greg Cook has been ground breaking with a significant effort to underpin junior development as momentum builds towards New Zealand hosting an AFL fixture.
Hawthorn’s current agreement with Tasmania is well placed and will not allow them to participate in the fixture as a ‘home team’ but there has been interest in participating as the ‘away team’. Recent interest has escalated and confidence is high that a team willing to participate in the clash as the “home team” has been found.
An historic clash could emphasise what the NZ actually stands for in ANZAC and as the list of AFL players with New Zealand heritage grows, who knows, we can look to the future to a New Zealand team competing against Australians and happy to do this with an oval ball rather than a round one.
http://www.aflnz.co.nz/NZHawks/NewZealandHawksSeniors/NewZealandHawkstotakeonAustralia/tabid/540/Default.aspx[*1]