In part two of our look at the local footy scene in the German state of Baden-Württemberg, we take a look at the Hawks from Haslach, a suburb of the small city of Herrenberg.

Along with the Ludwigsburg, the Haslach Hawks are one of the two local footy clubs that have grown out of players from the Stuttgart Emus bring footy closer to home.

Driving force behind the Hawks is Jakob Jung, who spent a year as an exchange student in Bribie Island, Queensland, in 2009-10.

"Back in Germany I always had a Sherrin with me. At home and at school. So I taught my mates back in Germany at lunchbreak how to kick and stuff. One day I forgot the Sherrin and all of my teachers asked if I'd broken up with him, because I always bounced through the school house and handballed it up in the air during lesson - so they were really wondering why I forgot it that day."

"When Grant told me about plans to start a BW-League I asked my mates at school and we met at the soccer ground to train. Then other guys heard of it and came and so on. The local newspaper wrote about me or the Hawks a couple of times and they said that they will do so again when we have an event or something like that. Also, at the local swimming pool we wear our jumpers and kick the footy around so that the public gets interested in the sport."

"All in all we have around twenty players, all Germans."

The Hawks have their own custom-designed jumpers and took on the Taipans in a few matches last season.

Jung explains that he got into footy through friends at Bribie High School. "All of my mates played Footy and one of my best ones played at state level. He also taught me how to kick. After the season finished, I played the summer season at the Bribie Bulldogs and played in the regular season of 2010 until I left Australia in July."

A few weeks before leaving, he was mentioned to one of his teammates how much he would miss playing footy back in Germany, and was given a link to the Stuttgart Emus website. From that point, he started playing with the Emus and has since graduated to the German national team, the European Legion and the Europe Continental team.

With regards to the setup of the new league, Jung says 9-a-side is the best way to start. "It can be good quality football to learn the skills. For a sub-league it's a really good system and every town has a soccer pitch to train on."

He also sees the league as acting as a feeder competition for the Stuttgart Emus, with the Hawks not holding ambitions of joining the AFLG as a standalone club.

"I don't really agree with the thinking of the Taipans in starting a new AFLG club. We're so close to Stuttgart that it just doesn't make much sense. We should make the Emus stronger and go to practise there. I see the Hawks as an sub-club of the Emus. There are 10 Hawks who trained regularly with the Emus last season, five of them also already played for them. That's my aim - get people interested in the sport with the Hawks and send them to the Emus too."

"We need large numbers in Stuttgart to be competitive. Imagine that the Emus,Taipans and Hawks would train together twice a week. Emus are the head club and Taipans and Hawks train at their local ground a third time. Then the Emus would have a bowl of something like 40-something players they could pick from!"

"The AFLG plays every second week or every third week. There's enough space between to play and get game practise. The AFLG 9s are combined with the National Training camp this year. That's a big opportunity for the Hawks, Taipans and Emus to learn from."

The Haslach Hawks are pictured below. In the upcoming third instalment of our series on local footy in Baden-Württemberg, we'll be taking a look at the new clubs hoping to get off the ground, as well as a look at how the league may be structured overall. 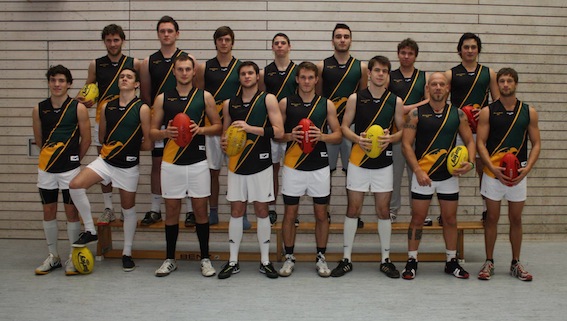