A recent conversation with Morten Merhøj from the newly formed Odense Lions in Denmark is a revealing study of how a club has ridden the roller coaster of development and come through to be a new potential force in years to come on the Danish footy landscape. The following article is that story through Morten’s eyes: a story of dreams, setbacks, determination and bringing a vision to life.

“Well the story of how Odense Lions started really goes back to the year 2011. Daniel Petrolo and a few other guys tried to start a team in Odense.” (see previous story linked here[*1]  )

“The problem for the project was that there simply weren’t enough people interested. It takes a lot to build a club from nothing, and not one of the people involved at this time knew anything about how to do so. Then some of the guys interested moved away and when you are 6 and 3 leaves it is hard to keep the dream of a football club alive. The Odense Lions project was stopped before it really started.”

“Then in 2013 I moved to Odense in the beginning of February. My background is that I have played footy in Farum since I was  13, I was a part of the big junior program that was going on in Farum at that time.  Then when I turned 16 I took over and started running the next generation of juniors in Farum. Having played three months in Australia at Geelong College as a part of the Farum Junior program, and having represented the Danish national team at the World Cup, it is fair to say I truly loved footy. The reason for me to move to Odense is that I was accepted at the University of Southern Denmark to study medicine.”

“When I moved to Odense I tried to get in touch with the guys playing football here, but I learned that the project had stopped and the only one left was Daniel Petrolo. But living in a town and not playing football was not an option. So Daniel and I met at the local Irish pub and planned how we could start the Odense Lions project again, but this time with a totally different attitude. We decided to keep the name Odense Lions. For me it was because my old club Farum Cats used to be called Farum Lions, so it seemed like a good fit with me being a part of a new club that I wanted to be  as good as the Cats (most successful team in DAFL history), but starting from almost nothing like they had did in 1994.”

“The first goal was to get a field to train on. Then with a field we would have a place to invite people down and try. This was one of the problems the 2011 project faced. The rule in Denmark is that if you want to start a new club and use a field, you need to be a registered club with all the rules regarding memberships, activities and much more. This took the rest of the Danish winter, so when the sun started to come out again and the grass started to grow we were accepted as a new sport club in Odense and were allowed to use a soccer ground with good facilities.”

“As we waited for the winter to be over and being allowed on a field, we started trying to spread the word. Attending the university was a great way to try and get new players.  This resulted in [success] when we had our first training session at the Odense Lions where we had 11 players down to have a kick. Daniel had included his younger brother Peter Petrolo in the project and he has not missed many training sessions since.” 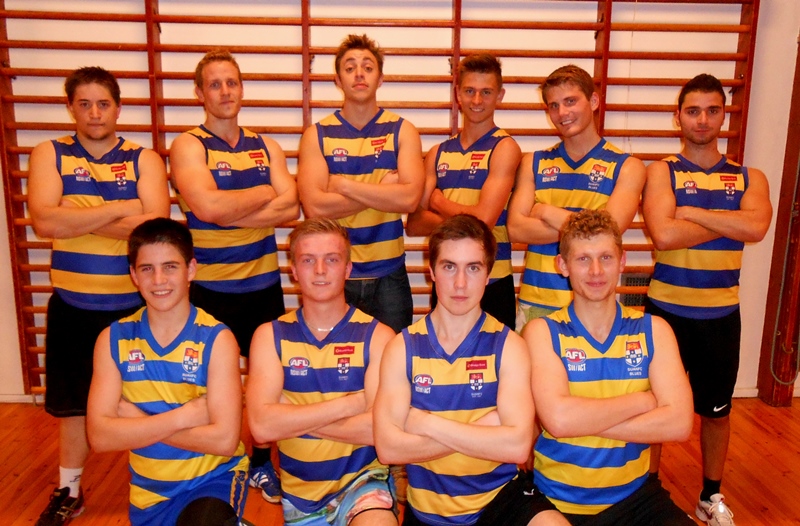 “The value for a new team to have a group which included myself, Daniel, his brother Peter and the three French who wanted to train every time made a good foundation for new players to properly see the sport.”

“At this point we had many people coming and trying the sport. At some training sessions we would have 14 players, more than enough to fill a team. The rule in the DAFL is that if you are a first season team you can go down to play 9-a-side and the over a few seasons build it up to a 12-a-side team.”

“Our problem as this stage was that we were too late to join the DAFL 2013 season, and we wanted to give our players the opportunity to play some real games. We then made a deal with Randers Dockers, a team in DAFL from Jutland, that we could come and play with them this season.  So for the 2013 DAFL season Lions players would get game experience playing for Randers Dockers.”

“But we also wanted to have our own games as the Odense Lions. We then applied to the DAFL to try and get permission to host the only one day tournament there is in Denmark, the nine-a-side Danish championship.  It is a tournament where every team in Denmark brings a nine-a-side team and play each other. We were allowed as a step in our development to host the tournament and we got our first three games as Odense Lions. We lost all the games and we first kicked our first goal in the second game, but every Lion needs to learn how to walk before it can run and kill.”

“We achieved many goals in the 2013 season; we had eight players who live here and are a part of the Odense Lions project to play in an official DAFL game.  Five of them played a game for the first time. And we played our first games as the Lions.”

“The next chapter in the story of the rebirth of the Lions is to try and get more committed players. Having around ten people at the moment, our goal is to get more players during winter and then be our own team in the DAFL for 2014. We have already received a great amount of help from AFL Europe donating footballs and jumpers to us so we are all ready to work hard over winter.  We have booked an indoor place to train so we can keep improving our skills and our team.”

“This time the Odense Lions project cannot be stopped.”