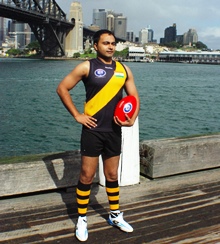 It is three thousand odd kilometres between Punjab in north India to Kerala far down south. It’s another 2000 kilometres between Gujarat far west and West Bengal on the eastern borders. Massive distance the figures suggest and the present Secretary General of the Australian Rules Football Association of India, Sudip Chakraborty, has travelled the length and breadth of the nation repeatedly for the past 12 months just for footy. Starting from the national championships in Kerala in 2012 and set to culminate in another championship in Goa this November, this twelve months has been one hell of a ride for this footy vagabond.

A cricket fanatic and open to new ventures, Sudip jumped on the footy bandwagon in 2008 and before long he had become an integral part of the sporting activities in the country. By the end of 2011, Sudip had already represented his country in two International Cups, and as the days rolled on, what started as an exploration, turned into a vision and a stubborn will to make his dream come true.

The dream in itself might sound mainstream – to see India become one of the top footy playing nations. But for a 19 year old (in 2009) to start developing a new sport from scratch, it takes more than wishful thinking. It requires that consummate concoction of planning, perseverance, patience and a bucket-full of stubbornness…and he had it aplenty.

Giving up on all other possible career paths, post his Masters in Sport Management from UK, Sudip devoted himself entirely to footy. Without any financial backing or promise of support, Sudip has been on the road in buses and trains a million and one times in the past year. Early 2013 saw Sudip introduce the sport in the states of Gujarat and Rajasthan, having been invited to set his ideas rolling in motion by the present Chief Minister of Gujarat and Prime Ministerial candidate Mr. Narendra Modi and Prince Lakshyaraj Singh Mewar of Udaipur respectively.

His journey has also taken him to Mumbai and Delhi numerous times to seek corporate support and to urge influential personalities to extend their support. Perhaps his proudest moment in the past year was to witness a tournament in Mumbai completely organised by the local lads. Encouraging sign that, and a subtle reminder that there are people out there who might share his passion for footy. Another experience he will cherish for life is a visit to a footy manufacturing factory in Jalandhar, where he witnessed first-hand the complete footy manufacturing process; a process Sudip was pleased to confirm has no child labour involved.

For months on end Sudip kept travelling without any organizational support, spending a fortune in the process. It is not easy to inculcate a new sport in the minds of a cricket crazy population but Sudip through his efforts managed to conduct one-off introductory sessions for a staggering figure of 1000 students across Maharashtra, Rajasthan and Gujarat! He also held a few sessions with underprivileged kids from the international sports NGO Magic Bus in Maharashtra. On his journey he did find support from a few individuals who believed in his vision and the power of footy. Tom Calder, Australian Trade Commissioner in India, Lincoln Harris owner of India Unbound, and Rick Shrowder owner of Global Community Sports (GCS), have been pillars of support throughout his venture. Incidentally, Lincoln kick-started Footy proceedings in Mumbai and is still a regular supporter of all Footy activities in the busy city. Another source of support came in from former Fitzroy/Melbourne player Don Whitford who conducted a few training sessions for kids in Mumbai at Shivaji Park.

The past two months have seen Sudip’s effort bear fruit. A successful setup of Global Community Sports franchise in India to deliver educational and cultural exchange programmes to schools in Rajasthan, Gujarat and Haryana has also been a venture which is slowly being welcomed by the schools. Sudip’s efforts were also given a massive boost by the successful application for the Australian Sports Outreach Program grant sanctioned by the Australian Sports Council which facilitates the Australian Rules Football Association of India (ARFAI) to develop the sport in 3 states in collaboration with Magic Bus, in the next 10 months. To top it all off, Sudip plans to showcase a grand event in the form of the ARFAI national championship from the 15th to 17th of November to be held in Goa, where the Victorian Government has thrown in support this year.

Looking back at the last 12 months, Sudip said “These 12 months have given me bag full of experience to cherish for life, ranging from knowing how diverse cultures in India respond to accepting a new sport, to underprivileged kids from the biggest slum of Asia in Mumbai wanting to be a footy player for India like myself, to learning the entire process of how a footy is manufactured. Not to forget the continuous encouragement & support of a few close people like Tom, Rick and Lincoln and of course my parents who have kept faith in their son travelling around crazily for the love of his sport at his own expense. I should definitely mention about two of my best friends Vineet Basu and Mona Kalra, who have also voluntarily helped me in the process whenever I needed them and have been part of my journey on several occasions, all out of their love for me and sports. They have now rightly been recruited by AFL India as development officers for the ASOP project. Although there were many drawbacks during the period, and lack of support from Australian sources, I believe in one mantra i.e. Hard work never fails – It’s all about the good work at the end.”

Footy might not be big in India at the moment but whatever it has to show for, is squarely because of the sweat and toil of Sudip and his ‘madness’ surrounding the game. There have been times when he has felt shackled down by the system, but that’s the thing about true passion, it always finds a way out. And Sudip looks to be doing just that. With a more regular and steady access to resources, there’s no fathoming what he can achieve with the sport, and for those who have been part of his journey will not be surprised out of their wits to see him achieve greatness. For now, Goa beckons!