Following last year’s success of the inaugural national level tournament of Australian Rules Football in Kerala, India and the wonderful reception it enjoyed from people, it was time for hosting the 2nd annual national championship - AFL India - OGM Cup 2013. The venue for the tournament this year was the richest state of India, in terms of per capita GDP, Goa which is located on the western coast of India.

There was fair bit of improvement on last year's tournament which witnessed participation of five teams from three states of India. This year, with the immense popularity of the sport increasing day by day, a new state featured in the tournament from West Bengal, the birth place of Footy in India. All up there were six teams participating- three junior teams and three senior teams. The senior teams were Bengal Tigers, Maharashtra Giants and Kerala Bombers and the junior teams were Maharashtra Giants, Maharashtra Tigers and Tamil Nadu Kangaroos. All the teams played in round robin format with the top teams qualifying for the Grand Final. This year the tournament witnessed two winners-one in the senior division and one in the junior division attesting the fact that the popularity of Footy in India is disseminating like wildfire.

A regal show of passion and devotion for the sport along with dexterous skill were on display as the players from different strata of social and economic backgrounds and age groups faced each other, all aiming to lift AFL India – OGM Cup, sponsored by Perth based mining company OGM, along with its Indian counterpart RP Group of Companies.

The tournament was organised by the Australian Rules Football Association Of India (ARFAI) at the Village Panchayat Ground, Sangolda, Goa from 15th of November to 17th of November,2013. The opening ceremony saw some eminent personalities of the Australian Rules Football fraternity. The tournament was inaugurated by Andrew Cadzow - AFL Asia Pacific Manager, who was in India as a part of a broader initiative undertaken by the ARFAI through the Australian Sports Outreach Programme (ASOP) grant sanctioned by the Australian Sports Commission. Also gracing the event were Peter Cullen - Founder and current National Development Manager of Reclink Australia, Rhan Harris - ambassador of Reclink Australia and the legend himself Gavin Crosisca - who played 246 games for the Collingwood Football Club and being on the coaching panels at AFL clubs North Melbourne and Hawthorn.

All the three days had its share of excitement, passion and drama. The first day saw the coaching persona of Andrew Cadzow and Gavin Crosisca train not just the players but also the development officers of ARFAI, coaches/mentors from the different states along with the coaches from the international sports NGO - Magic Bus, who is one of the partners in the ASOP programme that ARFAI is working on at present. Their competent advice to the players was reflected in the skills the players showed during the tournament. On the second day the passion that the players feel for the game and momentousness of the tournament is to them was evident. During a senior division match between Kerala Bombers and Maharashtra Giants incessant sledging could be witnessed and in the end this led to a nasty brawl between the two teams. Even though this incident showed the passion of the players for the game but the ARFAI officials along with Andrew, Gavin and Peter rightfully condemned the incident. 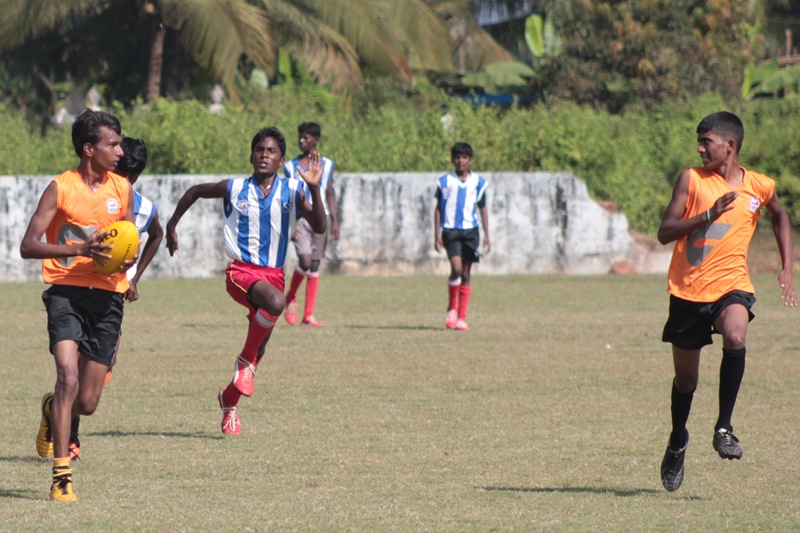 But the excitement didn’t dampen as the junior division matches went on as scheduled with some really prodigious play on display. The main lodestone of the third day was the Grand Final of the junior division. The two deserving teams- Maharashtra Giants and Maharashtra Tigers- went into the finals. The portentous show of skills and sportsmanship went on to nullify the unfortunate incident that happened the day before. To quote the great American football coach Vince Lombardi “Winning is not everything, it’s the only thing”.

Those words of Lombardi seemed to be ingrained in the mind of all the players. They played with all they had, they gave in their best efforts. It was a really close contest with Maharashtra Tigers having the last laugh defeating Maharashtra Giants 3-6-24 to 3-3-21 and lifting the AFL India-OGM Cup from the hands of Wayne Lewis, Commissioner to India, State Government of Victoria. For Wayne who has just settled in India, it was an overwhelming experience to attend a tournament of his favourite sport in India, which he had no clue had started making its mark on the cricket crazy nation, and thus he promised bigger support in the future from the Victorian Government’s side to help develop Aussie Rules in India, arguably Victoria’s best product ever.

Sudip Chakraborty, Secretary General of the ARFAI hosted the awards ceremony. The ARFAI presented footies with the logos of the sponsors to the supporters and dignitaries present. Reflecting on the events of the past few days Sudip said “It has taken a lot of hard work since last years’ national champs, travelling around India continuously and specially making three prior trips to Goa to set up the tournament on totally unfamiliar grounds. But the best part is the scale of the tournament went up quiet high compared to last year along with the skill and passion for the game on display by the players. Now that we have a team of officials together thanks to the ASOP grant, we look forward to a much bigger tournament next year with other new tournaments filling in the year as well.”
AFL India would like to thank all the three AFL Clubs, Richmond Tigers, Essendon Bombers and GWS Giants for their support they have shown towards the tournament, along with other sponsors Victorian Government, Reclink Australia, Musashi, India Unbound, and Patchi. 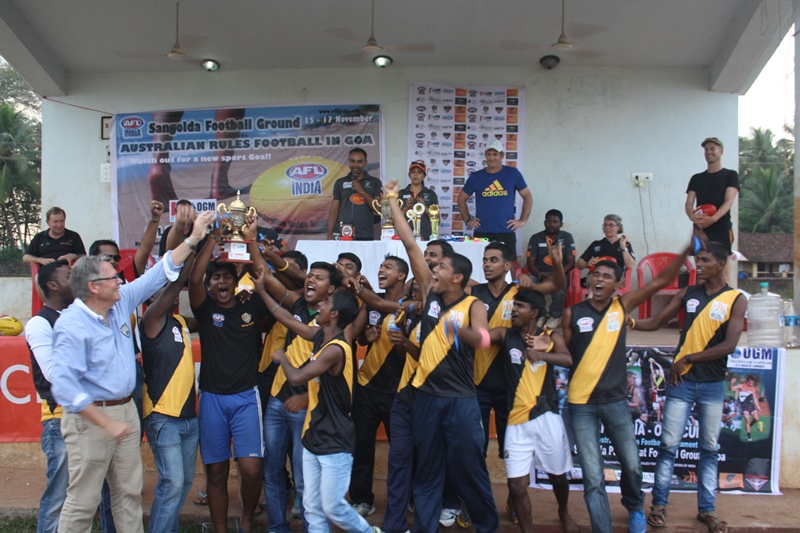 We are also grateful to Reclink Australia for providing the wonderful support in helping Lincoln Harris set up the Maharashtra teams and Rick Shrowder, Director of Global Community Sports, based in England, for the wonderful work he has put it in Tamil Nadu which culminated in the popularity of the sport in the state through the work of an NGO named Patchi, led by Syed Ali . We would also like to thank Rhan Harris, Ambassador of Reclink Australia for flying up to Goa from 'Down Under' especially for the tournament, and sharing his skills and knowledge with the players from all the teams and training the umpires for the tournament.

With the success of this year’s tournament, the third instalment is surely going to take place next year and probably with involvement of more states as Australian Rules Football Association of India has already decided to promote the sports in the states of Jharkhand and Rajasthan. All the information regarding AFL in India will be up on our brand new website http://www.aflindia.org[*1] (it redirects one to our Facebook page at the moment) which will be launched in the New Year and we are looking forward to offer advertisement space to everyone interested.