Aussie rules in Jakarta - Indonesian lads are loving our footy

The following article was written by Kym Morgan, published in Adelaide's Sunday Mail and is reproduced below.

SOME arrive without boots.

Others are slightly weary after having travelled six hours just to be there.

But every member of the Jakarta Bintangs Aussie Rules team beams with excitement - and tonight is only training.

"The level of enthusiasm and the love these kids have for Australian Rules is pretty phenomenal,'' team coach and Adelaide expat Adam Bray says.

Bray moved to Indonesia with his wife 18 months ago and, as a former amateur level player in Adelaide, decided to join the Bintangs to stay involved in footy.

Today, he finds himself not only coaching the Bintangs but helping drive the growth of AFL among 12-23-year-old Indonesians.

On an average Thursday night training, about 40 locals will turnout at a local synthetic hockey pitch - lack ovals are one of many hurdles the game faces in central Jakarta.

But if a tournament or a match is looming, numbers can swell to 100, and the hockey pitch explodes at the seams.

Bray has helped recruit many of the current Bintangs players from local schools or orphanages.

Most are poor and footy quickly becomes an obsession.

"Some don't have families, some don't know who their families are,'' Bray says.

"Footy is an outlet for them.

"It's a form of fun that they would never have had otherwise.

"Some of the kids we see at the orphanages have posters stuck on their walls of AFL players ...

Despite the obvious limiting factors, the game of AFL is growing in Indonesia.

In fact, last year was a breakthrough year for the code right across Asia.

Games became more regular among the 20 teams - who include the Thailand Tigers, Singapore Sharks, Cambodian Eagles and Osaka Dingoes.

There is hope a more formal league can be established.

The Bintangs played about eight matches against other Asian sides. They won all three matches one-off games and were competitive at the Asian Championships in Thailand.

Bray says there is no obvious AFL level player among his current stocks but believes it is only a matter of time before an Indonesian graces the field at the highest level.

"Indonesia is a country of 240 million and I can see it happening at some stage,'' he says.

"There are kids I've seen that are lightening quick.

"There are kids that are fearless in their attack on the footy."

This year, will provide another landmark occasion for AFL in Indonesia.

The Bintangs will combine with the Bali Geckos and the Borneo Bears to form the Indonesia Guradas.

They will play for the first time at the AFL International Championships in Melbourne this August against teams from around the world.

Getting there will be a problem because of the expense but Bray is determined to expose the small but fleet-footed Guradas to the world.

"We'll probably play in the division two competition and I think our speed and our fearless approach will stand us in really good stead.

"We're looking to send a team of 25 players across. The overall cost will be at least $100,000, so it's a real challenge for us to raise the sponsorship and the money needed, but we're determined to do it."

Lukman stands at just 170cm, but let him loose on a wing at any amateur footy ground around Adelaide this winter and his speed would be certain to cause the opposition headaches

"I am small compared to some of the other players, so I have to learn to run very fast,'' he says.

Lukman is rated as one of the best players in Indonesia and has toured Singapore among other places with the Bintangs.

He is expected to win a place in the Indonesia Guradas line-up for the this year's International Cup.

Exposed to Aussie Rules as 17-year-old, Lukman has now been playing four years and attended an AFL conference in Adelaide this week.

A North Melbourne supporter, Lukman is one of a small but growing band of Indonesian youngsters who has been exposed to Australian Rules in recent years and loves the game.

"It is a very fast game, and I love the bumping and the running,'' he says.

BELOW: Lukman with Adam Bray at the Adelaide Oval. Source: News Limited 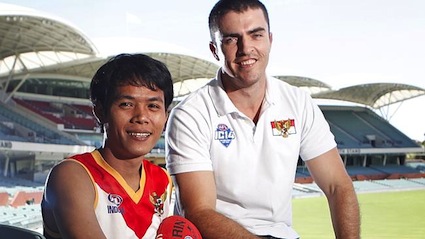