First ever Footy tournament in Bengal

Footy returned to its birthplace in India on the 15th of June as Kolkata hosted the first ever ‘ARFAI Bengal State Championship’ in Salt Lake, West Bengal. Six teams with players hailing from Bongaon, Kharda, Hooghly, Howrah and Kolkata fought it out on the Bharatiya Vidya Bhavan school ground on a Sunday which witnessed scorching heat, thunderstorm, torrential rain and some cracking Footy action.

The ground in fact hosted the first ever exhibition match of Footy in India back in 2008 with the efforts of present Secretary General of the Australian Rules Football Association of India, Sudip Chakraborty.

The teams were divided into 2 groups of 3 each and played out a round robin format to decide which 2 teams would go on to contest the final. The first group featured the Tigers, Giants and Bombers while the second group matched up the Eagles, Saints and Wolverines against each other. The Eagles team was lucky to play in official West Coast Eagles merchandize provided by the club themselves and facilitated by ARFAI ambassador Helen Mell from Perth.

The tournament also saw the first appearance of a non-Australian brother club in the form of Wolverines who take their name from Wolverhampton Wolverines club in AFL England. After fiercely fought matches in the group stages, the Bombers and the Saints advanced to get a shot at the coveted trophy.

One of the major highlights of the tournament followed the group stage matches as the girls from Bongaon, trained by the experienced Rakesh Ghosh and Biswajit Das, took the field to play the first ever girls friendly match in Bengal. The start of the final was delayed due to heavy downpour after the friendly match.

However, while the match was put on hold, the action continued on field as the ARFAI officials including the president, Tom Calder, braved the rain to enjoy playing some Footy themselves. Prasun Mukherjee was pleasantly surprised to see the President, Secretary General and Treasurer of an organization take the field themselves for the first time in his life as he mentioned later during his presentation speech.

Serious action soon followed as the finals kicked off in the presence of a panel of honourable guests. The list included Prasun Mukherjee, former Commissioner of Kolkata Police, President of Cricket Association of Bengal and Executive Vice Chairman of Bharatiya Vidya Bhavan Kolkata, Maidul Islam, former Indian soccer player and Mohameddan Sporting legend, G.V. Subramanium, Joint Director of Bharatiya Vidya Bhavan and Stephanie March, Australian Broadcasting Corporation (ABC) India correspondent. Stephanie had been present in the state for 2 days with her colleague to cover the Footy story in Bengal and the hardships the players overcome to play the game without any support from Australia.

The final was a fast-paced encounter, somewhat attributed to the conditions of the pitch, and the Bombers and Saints enthralled the spectators with some admirable Footy skills. Although tensions were raised during the latter stages of the encounter, it was Footy that prevailed as the Bombers, under the leadership of Arif Ali, ran out eventual winners, claiming the first ever Bengal State Championship. Scores for the Grand Final – Bombers 6-1-37 defeated Saints 1-1-7.

Arif Ali being one of the most experienced players in the group and having represented the Indian Tigers in AFL International Cup 2008, played a major role in leading his team to victory. The individual awards went to Arif Ali for Best Mark, Maidul Ali from the Bombers for Best Goal and Amaresh Mondal from the Saints for Player of the Tournament.

The day ended with a presentation ceremony under cloudy skies as Prasun Mukherjee welcomed ARFAI to use the school ground whenever they wanted in their future endeavours. ARFAI expressed their sincerest gratitude to Bharitiya Vidya Bhavan for letting them use their facilities and for being one of the biggest supporters of the Indian Tigers during their visits to Australia during the 2008 and 2011 editions of the International Cup, coming in from Bharatiya Vidya Bhavan Australia.

A special vote of thanks was directed towards Ashim Dawn, senior P.E. teacher at Bhavan’s, who had also the assistant coach for the Indian Tigers in AFL International Cup 2011, for his outstanding contribution throughout the day despite his advancing years. The day was wrapped up in jubilant mood with the glimmer of hope for bigger things to come in the future. 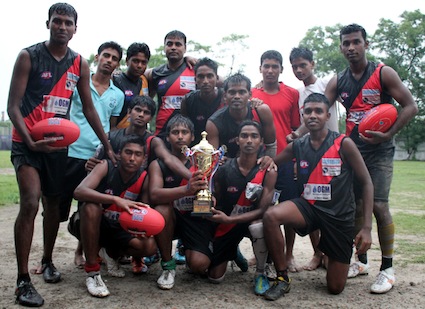 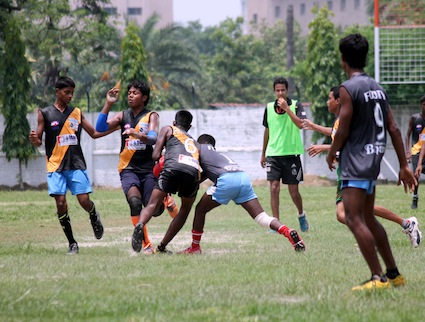 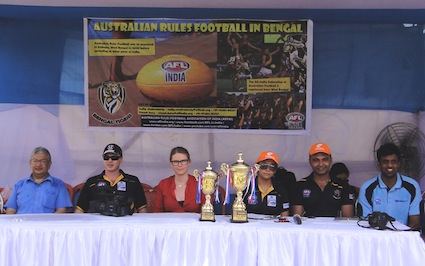