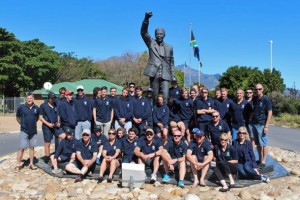 The following article appeared on the AFL Footywild (South Africa) website, contributed by Tom King at K-ROCK Football. It tells the fascinating story of the experiences of the Geelong based St Mary’s football team, a member of the Geelong Football League, and their recent experiences on a trip to South Africa to play footy.

The article clearly shows that whilst football is the vehicle by which these young players take their opportunity, it is the life experiences on their journeys which are most profound and often life-changing.

“(It’s) about getting the kids to a different environment and culture, and understanding how lucky they are to live in Australia.”

A VISIT to a maximum security youth prison that houses a sports academy to help in the rehabilitation of juvenile offenders has provided one of the highlights of St Mary’s recent cultural exchange to South Africa.

The second trip to the Republic continues a bi-annual tradition of the Saints, having previously also been to Ireland, Darwin and Cairns.

The club did play three games of football while they were in South Africa, but junior coordinator Kevin McMahon said that was secondary to the eye-opening experiences for the group of 25 16 and 17-year-olds and their families.

“(It’s) about getting the kids to a different environment and culture, and understanding how lucky they are to live in Australia.”

McMahon has admitted there was some trepidation amongst the group ahead of the visit to the jail which housed murderers, rapists and former gang members.

“They were a bit nervous and a bit stand-offish,” he said.

“But, at the end of it, it was amazing. They warmed to the kids like they were best mates.

“They explained Aussie Rules and they were getting into conversation with them about their crimes.

“It blew me away a little bit, these 16 and 17-year-old kids talking to them (the prisoners).

“It was a pretty moving time.”

McMahon said the establishment of the prison’s sports academy was proving to be successful.

“The re-offending rate in the main part of the prison is 95 per cent,” he said.

“But for the kids who go through this academy it’s about six or seven per cent.

“It really showed what sport can do in regards to putting kid’s lives back on track.”

St Mary’s also visited a disability orphanage that receives no government support and the shanty town of a local boy who stayed with the Saints in 2013.

A trip to the Mandela Museum and Robben Island, where Nelson Mandela spent 18 of his 27 years in incarceration, were also on the agenda.

On the field, St Mary’s and South Africa shared the honours in the opening two games before the teams were mixed for the third contest.