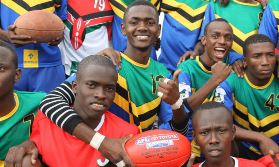 The following story  from the AFL website by Conor Walsh looks at the recent match played in Tanzania for the first time against a team from Kenya.

PLUMES of dust, jagged volcanic rocks, cows and low-flying planes set the scene for one of the most unlikely of Australian football games, played out on a rough African field.

But add a tight tussle and a last-gasp hero, and you have all the elements for a classic.

The match, held on a sometimes wet and always wild day in June in Arusha, Tanzania, was tightly contested by Tanzanian and Kenyan schoolboys on a field at the foot of imposing Mt Meru.

It was the first international Australian football match in the country and the second annual match of the Zimele Sporting Exchange, established by Australian educator Tom Purcell.

Horizontal rain during a goalless first-half couldn't dampen the spirits of the players, and two third-quarter goals for the Kenya Buffaloes set up a strong second-half performance that allowed them to pinch a late goal and seal a four-point win.

The Buffaloes, made up of underprivileged boys from Brother Beausang Catholic Education Centre, Embulbul, extended their unbeaten run on the international stage, having won the first exchange match last year on their home turf.

Emmanuel Mutisya was the hero for the second year in a row when he slotted the match-winner with a cool set shot. He kicked the winning goal in the dying seconds of last year's match and is fast becoming a team favourite.

The hosts, the Tanzania Simbas from Edmund Rice Sinon College, Arusha, were brave in defeat. Their ferocious tackling and long kicking was particularly impressive, but they couldn't hang on to their slender lead in the end.

On a ground next to Arusha airport, its surface covered in rocks, pitted with divots and patrolled by the occasional wandering cow, the players battled fiercely in front of a rowdy crowd of school kids, locals and a few travelling Australians. One fan, from Adelaide, had tracked down the game after reading a previous article on AFL.com.au.

Everyone is aware of the outstanding athletic talents of the east Africans, but their ability to learn and master the unusual skills of our game is just as impressive. The strength, endurance, speed and hardness of the players was a sight to be seen.

Buffalo Samuel Mutinda was dominant in the midfield, gathering numerous clearances in a best-on-ground performance. Tanzanian identical twins Habibu and Hatibu Hassan Athman were strong, bookending the Lions forward and back, while Kenyan skipper James Gacheru was typically brilliant in the ruck in his second exchange match.

For their efforts as the best players for their teams, Mutinda and Habibu Hassan Athman were presented with the two game balls, donated by Ian Weeding from AFL Media. Both were official game-day Sherrins, with Mutinda receiving a special-edition Grand Final ball from last year's final between Hawthorn and the Sydney Swans.

The exchange program is the brainchild of Purcell, who founded Zimele in partnership with the Edmund Rice Foundation to support the marginalised people of Africa.

Zimele runs programs throughout the continent and provides assistance for some of the most underprivileged people in society through school sponsorship, micro-finance projects and support for people living with HIV/AIDS and other illnesses.

The sporting program, first undertaken in Kenya last year, also consists of competitions between the two schools in netball, volleyball, basketball and debating.

The exchange provides the talented kids with an opportunity to experience other cultures, travel outside of their townships and develop new relationships.

Throughout the exchange the schools competed hard, with the football match a climax to the three-day program.

Next year the exchange will return to Kenya, where the Buffaloes will be aiming for a hat-trick of win. It won't be easy, however, as the Simbas will be on their tails once more, ready to pounce. 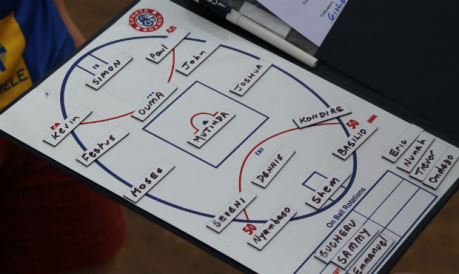