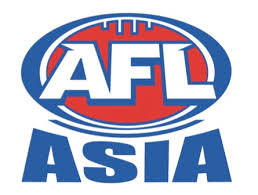 The 16th AFL Asian Championships, to be held this Saturday 17 October in Bangkok, is set to be the biggest and best ever, with record numbers of teams, local player initiatives and a new 2-division format.

13 teams from across the Asian region will descend on Bangkok this week, with the Singapore Wombats looking to defend their 2014 “Asian Champs” title against six other teams in the new First Division, including the Hong Kong Dragons, Jakarta Bintangs, Malaysian Warriors, Philippine Eagles, Vietnam Swans and hosts the Thailand Tigers.

“The new format means no easy games this year”, said Vietnam Swans President and AFL Asia Vice President Grant Keys. “The larger teams just won’t be able to rest and rotate players like they have in the past, it should really even things out. All seven first division teams are going to Bangkok believing they can win it.”


A new Second Division Cup will be competed by 6 clubs, including the Bali Geckos, Cambodian Eagles, China Reds, Macau Lightning, Myanmar Fighting Cocks and Lao Elephants. Most of the second division clubs will have large contingents of local development players.

“We are excited by the commitment of these second-tier Clubs towards local development. The new Second Division will give these guys a legitimate opportunity to taste success at Asian Champs and enjoy more games against teams of similar experience levels”, said AFL Asia President Darren Whitfield.

With over 35 local Asian players already confirmed to attend this year’s Champs, AFL Asia has sought the assistance of West Coast Eagles legend Andrew Embley to lead a training clinic for all local players on Friday 16 October, before coaching the inaugural all-local South East Asia vs East Asia match, a new initiative to be held prior to the Asian Champs Grand Final.

“We are absolutely delighted to have Andrew with us in Bangkok once again” Whitfield said. “Embers did a fantastic job with the IndoChina boys last year and with local development a big focus of AFL Asia, he is the perfect person to help us ramp up our efforts in this space.”

Embley has a strong connection to Asia, being of Anglo/Burmese ancestry with both his grandparents and father being born in Burma (Myanmar) before migrating to Perth in 1964. This will be his second AFL Asia engagement, having coached the inaugural match of the IndoChina Bulldogs team at the 2014 IndoChina Cup.

“I had a great time with the boys last year and I’m looking forward to coming back and seeing how much they have developed over the past year,” Embley said. Its great to see so many local players now playing footy in Asia and I’m happy to do what I can to help their development”


About the AFL Asia Championships

The Asian Champs, now in its 16th year, is the most prestigious Australian Rules Football tournament in Asia. For the first time in the history of the event there will be two divisions of teams competing in Bangkok, with 7 first division and 6 second division Clubs confirmed making it one of the biggest Champs to date