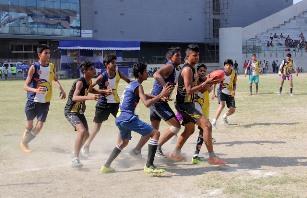 This month in Kolkata, India, the annual AFL India National Championships – the ARFAI OGM Cup - Australian Rules football tournament was held. The tournament has continued to grow – both in numbers and standard – over recent years. This year’s event was won by the Bengal Tigers over the Jharkhand Crows. The final score war the Tigers 2 6 18 down the Crows 2 1 13.

The following article from the Koltata Konnector website, written by Abhijit Ganguly, takes a closer look at the growth of the game in India in the wake of the tournament.

The game was officially born 156 years ago when in 1859 its rules were codified four years before soccer even had a codified set of rules, but it had been played for several years before that across the southern states of Australia.

Originally a sport played by cricketers in their leisure time to stay fit, over the decades the game created a unique identity of its own. It may look something like rugby but the rules are completely different.  As basketball and baseball are popular in the US, so Footy is popular in Australia. During a visit to Australia in 2015, Christiano Ronaldo even had a chance to learn the game and Indians such as Harsha Bhogle and Bengal’s own Sourav ‘Dada’ Ganguly have also been introduced to the game by their Australian counterparts. The name of the game is Australian Rules Football.  In short, “Aussie Rules” or simply “Footy”.

Recently the Australian Rules Football Association of India National Championship 2015, was held at Gitanjali Stadium, Kolkata. Australian Football League legend Gavin Crosisca who was in attendance said, “I was here in 2013 with a tournament in Goa. The skills of the teams that were down there has improved considerably. The training that these guys have been putting in is starting to show the rewards. I think that the tournament is improving considerably so it’s a credit to everyone who is involved. These two days of playing Footy is a fantastic thing for not just AFL but also for the Indian community because Footy brings communities together with a lot of camaraderie.”

The game is immensely popular in Australia where it originated and can draw crowds of up to 1 lakh spectators at the Melbourne Cricket Ground. It is now played in 51 countries around the world. It looks like a combination primarily of football and rugby but has elements of other sports as well. Unlike rugby, players can't throw the ball and can be tackled from all directions. For short passes, they have to hit the ball with their fist (called a ‘handpass’) similar to volleyball. For long passes, they have to kick the ball like a football goalie. They are also supposed to bounce the ball every 15 meters like basketball. With an oval shaped ball the ability to bounce the ball is a skill in itself.

Sudip Chakraborty, Founder & Secretary General at Australian Rules Football Association of India (AFL India) & Captain of the national team of India- Indian Tigers, told “Ricky Ponting in 2008 first played the sport here when he was playing for the Kolkata Knight Riders. In the same year, a coach from Australia came to Kolkata and the sport was launched in Kolkata and players from all sporting backgrounds were invited to try the sport. Similarly, a friend of mine who was a basketball player asked me to give this sport a try because there seems to be an advantage for tall people. I am from both soccer and cricket backgrounds but I still gave it a try.”

“Since this sport involves skills from various different sports, everybody has a part to play. First a team representing India was formed, which was supposed to travel to Australia. I got selected and we went to Australia and witnessed the madness of the game there. I started liking it and thought we can't just let it be a one-shot deal and that we needed to go back and develop it. Unfortunately, people who were in charge back then lost interest and nothing happened for one and half years. We wrote to the AFL and were given the charge.”

There are seven states playing the sport right now (Jharkhand, Bengal, Odisha, Rajasthan, Maharashtra, Tamil Nadu and Kerala) and in the last three years, the participation has gone up from around 1000 to 7000. The Indian Army has shown an interest in playing the sport. The Indian team named Indian Tigers goes to Australia every three years to participate in the AFL International Cup. Eighteen countries participate and Indian Tigers got its first victory against East Timor in 2011. Both the senior and junior division finals were between West Bengal and Jharkhand. Jharkhand won the junior division (61-0) while the Bengal boys won the senior division (18-14), making it three times in-a-row.

Talking about the USP of the sport, Sudip said, “It is the fastest outdoor team sport on earth. Wherever you are on the ground, the ball could be within three seconds over your head. The ball travels so fast and high, it looks really attractive especially for someone watching from the gallery. It involves skills of various different sports for example, rugby, volleyball, basketball, soccer, sprinting etc.” Sudip is trying to have a state tournament every year and then, select the national players. For West Bengal, he is looking to start a league as players tend to lose motivation as they play one or two tournaments a year.

Shane Sayner, a spectator in Kolkata, an avid AFL lover and regular traveler to India, told “It's great to see how the game has developed over the last few years in India since I first saw it in Goa in 2013. Much credit must go to the local coaches in each state, the player’s families, the supporters and former players who have stuck with the game and Sudip’s team at ARFAI who keep things going and growing on a day-to-day basis. Most importantly credit goes to these players who have come to love the game and stuck at it, improving themselves and this new sport in India”. 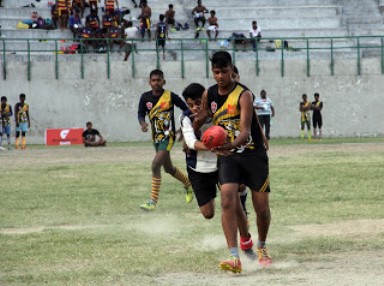