Is Women's Footy The Perfect Curtain-Raiser For AFL Games? 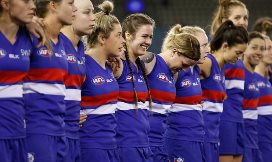 As the push for a national women’s AFL competition continues to go from strength to strength, an argument about the possibility of women’s matches being played as curtain-raisers to AFL matches has grown. As the women’s game continues to grow both across Australia and abroad, any type of positive publicity generated by the women’s game will only aid that growth.

The following arguments are from an article on the www.afl.com.au[*1]  website, written by Matt Thompson and Nat Edwards, looking at the various for and against debates on the issue.  Some of the points would also resonate with other women’s competitions in terms of strategies for the future growth of the women’s game across the world.

AS THE AFL pushes towards a fully-fledged women's competition in 2017, the only way for it to work is to become the standard curtain-raiser to men's games every weekend.

As a one-off TV event in 2015, the year's second women's game between the Western Bulldogs and Melbourne attracted significant viewers. But the proof will be in the pudding when it comes to long-term success.

There's no doubt the AFL will be very careful about the way the new League is implemented, but stand-alone is not the way to go.

It's essential the new teams are aligned with current brands, as the Demons and Bulldogs have done so well already. And to that point, the teams need to match the men's game when the new League is introduced.

It's crucial that there's a legitimate reason for fans to engage with the women's team, because it's the only way to ensure growth.

Fans are going to be a critical part of the women's League, and by integrating with the men's teams every step of the way, they'll be able to latch onto the already established supporter base.

So too will television coverage, and you'd expect the AFL to twist the arm of its current partners to get the games on air.

While the ratings were good for a stand-alone game, if the novelty does wear off, the League will need the broadcasters to stick with the concept.

There's absolutely an argument for a women's league growing the supporter base of Australian football, but we have to begin with including the fans we've got.

Curtain-raisers are the best answer to making the Women's League a success. - Matt Thompson

No - women's footy should be standalone games

THERE is no doubt that if a national women's competition is to be successful, the teams need to be aligned with the current clubs in the AFL.

What they don't need is to become a "support act" for the men every weekend. They deserve their own stage, and the chance to take ownership of the footy field, rather than play second fiddle.

In fact, there are some examples already in sport, that show having standalone games for females, and perhaps more radically a standalone season, is the key to long-term success.

Let's look at the English Football Association. The Women's Super League, which has teams aligned to English Premier League clubs, is played across the summer months as a standalone competition.

When the WSL was introduced in 2011, to supersede the winter-run Women's Premier League, the number of fans attending games increased by a staggering 604 per cent.

Crowd figures have continued to grow during the summer WSL competition, increasing from an average of 550 per match in 2011 to 1,076 in 2015.

As it is, footy fans are already inundated with football during the winter months. There's AFL, WAFL, TAC Cup, local leagues- the list goes on. With so much on, it's impossible and somewhat tiring to try and consume everything.

The appetite for footy is becoming so great in the off-season, that it isn't inconceivable to play the women's competition as a standalone season that runs for 8-12 weeks after the men's Grand Final.

Better weather and a hunger for more footy would draw bigger crowds to watch the women battle it out on the field.

It would also give these talented ladies a chance to prove their brand of football is good enough to take centre stage. - Nat Edwards