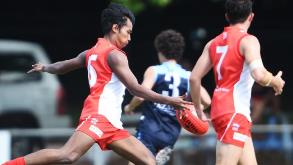 The 2015/16 season for the Waratah Warriors in the Northern Territory Football League has largely been one to forget.  Whilst the fixture shows a winless season to date, the club has used the year as a developmental period to grow the next crop of star players ready to again see finals action. Part of their experiments involved the opportunities given to four Borneo players, one of which played his first senior game recently. The following article from Grey Morris at the NT News gives the details of their journey.

NTFL club Waratah gets some international flavour with

The 22-year-old “Borneo Express’’ roamed between half forward and half back, producing a 12 possession game that showed he is comfortable at that level.

Coach Tim Weatherald said Santoso was the player that most impressed himself and Tahs official Garry Smart on a scouting trip to the Asian country at Easter.

“Timbul played about six games before Christmas in Division 1 and 2 and we were able to get him back after some visa issues only last week,’’ Weatherald said.

“He played in Division 2 and did amazingly well. He looks like he’ll head home next week so I thought I’d give him a run this week and have a good look at him.

“He’s got a lot of natural talent, struggles with the English language a bit, but as you saw out there he runs to the right places and has an appetite for the footy.’’

Santoso did some clever things, including finding Kim Kantilla for Tahs’ first goal with a long drop punt into the forward line.

Weatherald said Santoso had the basic skills and the ability to go to a higher level.

“He’s got an understanding of the skills required, it’s now a case of getting him to understand the game of footy,’’ the second year Tahs coach said.

“When you don’t grow up understanding where to run and kick the footy it means you’ve got a bit of work to do.

“But the bonus now is Timbul and the other lads can go back home and teach the lads over there what they’ve learnt from Darwin footy.’’