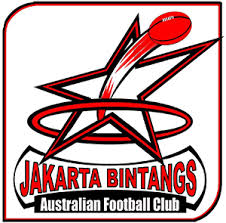 The 2016 AFL Asia season got underway in Yangon City, Myanmar.

After a hard fought game with scores tied at half time the visiting Jakarta Bintangs out lasted the hosts the Myanmar Fighting Cocks by a score of 63-53 yesterday in the inaugural Cocks Plate Contest, held on the “Hen House” pitch at Star City.

Despite a raucous crowd chanting tai kyet – or “Fighting cocks!” – for most of the game, the home team faltered in the fourth quarter, giving way in their own end to allow three goals in the last 15 minutes.

The Jakarta team started fast and scored in the opening minute after Myanmar’s All-Asia ruckman Conor Smith was outjumped by a much smaller, local Indonesian player. But the Cocks battled back with two goals from the ageless wonder Julian Clark, whose sticky hands enabled him to mark two kicks. At halftime, the sides were level, 5-3-33 to 5-3-33.


Before the match, the Cocks held an AusKick training day for children from Yangon orphanage Grace Home. Roughly 30 kids showed up for a morning of “learning” Australian Rules Football. The ensuing mass of kicking and laughter was only paused for a free lunch provided by 50th Street Grill and a chance to watch the big men play during the afternoon.

Grace Home director Amarylla Myatt sat with a collection of younger children during the game, and together their chants of tai kyet kept the Myanmar players in high spirits.

“AusKick went fantastically well – the kids loved the experience of running around the fresh, green area and trying a new sport,” Henry Cox, Fighting Cocks President said after the game.

“I’d like to thank the Bintangs for making the fairly massive effort to get here,” he said. “We’re pretty starved for footy in this part of the world, so we really appreciate you getting here.”

Full story from the Myanmar Times:

The Cocks’ next game will be in Phnom Penh on July 16 against the Cambodia Eagles.