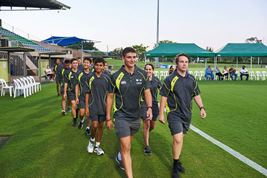 Adam Davis, the AFL National Umpiring Development Manager, proudly watches over his crop of umpires officiating at the National Diversity Championships in Townsville. Not only are these umpires representative of the six national teams competing at the carnival (Western Australia, South Australia, Queensland, Northern Territory, the combined Victoria/Tasmania team and the combined New South Wales/ACT team), they are also from diverse backgrounds themselves.

This diversity echoes the push that Adam and his umpiring team are chasing as their current recruiting program gathers steam.

In the last 12 months there has been a 15% increase in umpire registrations. As the game grows with more women’s footy, multicultural carnivals and other growth areas, umpiring numbers have to grow with that rather than fall backwards and further behind what is needed.
Already the umpiring quota contains 1% of indigenous umpires, 8% women and 15% from multicultural backgrounds. That figure is hoping to be swelled to 18,000 umpires by the year 2020, with a predicted 33% of that figure coming from those same diverse umpiring backgrounds.

But it isn’t that simple. Even though recruiters are selling the game, and the role of umpiring, any prospective recruits still face one big hurdle. To take on the role they need to feel that they belong in that environment. With the bulk of umpires traditionally fitting the “very white and very male” image, some indigenous, multicultural and female prospects can feel anything from uncomfortable to intimidated by their new settings. This is the key to the battle to recruit new umpires to the game.

But this is exactly the area being worked on by the umpiring brains trust. The creation of umpriring academies across the nation is a huge step. Within these academies and associated training centres, coaches are instructed to create environments that foster feelings of belonging and comfort. If a large part of the battle is making someone feel wanted, then that is exactly the way academies must be constructed.

One of the most powerful ways of creating that feeling is to have umpiring role models. One example is former AFL star David Rodan who has looked at an umpiring career now that his playing days at the highest level are done. Other former players like Leigh Fisher, Jordan Bannister and Andrew Carrazzo have also explored the same road, and with their lead others will follow. As a result, more people are expected to recognise umpires in a vastly different and inspiring way.

Adam states that this current phase of the umpire recruiting program is early in an eighteen month process, but the overall positive results may take up to a decade to be realised. Bujt the steps are being taken and the momentum is building.

The experience of the umpires currently in Townsville for the Diversity Championships provides a great experience for them and part of a career pathway. In many cases the recruits start learning through a variety of local academies before graduating to community umpiring in local competitions. From there the pathway leads to events such as the Diversity Championships. Of the sixteen umpires currently involved in Townsville, two will be selected to progress to the Under 16 nationals later in the year.

Habib Khalaf started his journey through an umpiring academy run through the Australian International Academy for Muslim students. From there he graduated to community umpiring in the Essendon District Football League (EDFL), then on to the Auskick grid games played at half time during AFL matches. Today he is in Townsville, following his dream and taking the next step on his journey.

Habib’s journey is exactly the “feel good” inspiration story of what people can achieve and as such he is already a role model to future umpires, either from the past player or diversity pools of prospects or any other sources being explored.

What Adam and his team have achieved already is positive and exciting. How exciting will it be in years to come as our great game flourishes further with more umpires, more opportunities and more growth across the whole football spectrum. 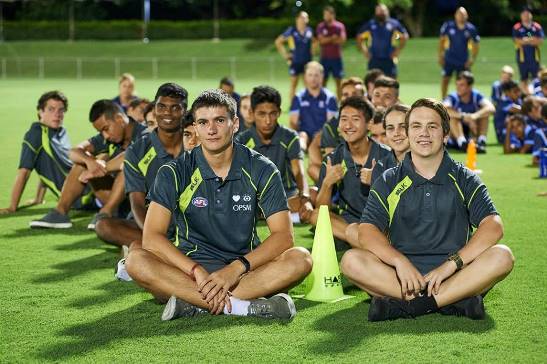 Left: No match can happen without our brilliant umpires.