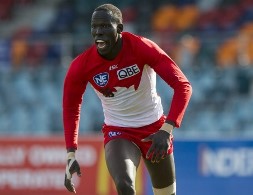 Pick 44 in the 2013 AFL Draft was Sydney’s. They had plenty of other players to choose from that later made other team’s lists. Some of the names that went after 44 included Ben Brown (North Melbourne - 47), Orazio Fantasia (Essendon – 55), James Sicily (Hawthorn – 56), Tom Langdon (Collingwood – 65), Sam Lloyd (Richmond – 66) and a few other decent picks.

But the Sydney Swans had already seen something they liked better. Their scouts had been up in Queensland watching the skills and potential of Aliir Aliir, the Sudanese boy who had been firing at junior levels for years. When he went to Western Australia in 2013 to improve his drafting chances (after being overlooked in the 2012 draft), Sydney’s eyes followed. The Swans, not afraid to take a chance, picked a fruit from the draft tree that might take a while to ripen, but when it did it would likely be a delight.

This weekend Aliir will make his senior debut. After an injury riddled first season, the young man enjoyed a better 2015 with consistency in the NEAFL. That form has continued into 2016 to the extent that when Ted Richards went down injured during the week, Swans coach John Longmire didn’t hesitate to give Aliir his chance.

Aliir Aliir’s journey has seen him born in a Kenyan refugee camp after his parents fled the war in Sudan. After six years, the family moved to Australia and settled in Brisbane to be near their uncle. It didn’t take long to discover Australian Rules football and the rest, as they say, is history. The journey now takes another great step when he runs out onto the Gabba for the Sydney Swans against the Brisbane Lions – another historical touch and fitting his debut will be in the state where he first fell in love with the game.

Majak Daw was the first Sudanese heritage player to play a senior game at North Melbourne. But Aliir holds a new record being the first player of Sudanese heritage to be taken at the AFL Draft – Daw was a rookie selection and has been joined on rookie lists by Reuben William (Brisbane Lions), Mabior Chol (Richmond) and Gach Nyuon (Essendon).

In a new AFL era where international players are making team lists more often, clubs are now prepared to back their judgement and give the players their time. Aliir’s time has now arrived and it will be an exciting day for him, his family, the club, the Sudanese community and footy in general.