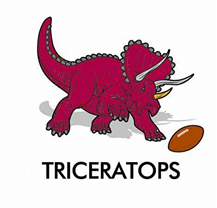 The vast tentacles of Australian Rules football have been spreading across India at an alarmingly pleasing rate, driven enormously by the work of Sudip Chakraborty and his tremendous team at AFL India. Teams are springing up all over India – north to south, east to west – and many young people are being inspired to start their own dream and create a club.

One such example is the Pink City Triceratops team in Jaipur, northern India. The city of three million people is around 250 kilometres from the nation’s capital, New Delhi. Jaipur is also referred to as the “Pink City Of India”, hence the new club’s name.

The Triceratops are a long way from having a competitive team at a national, or even local, level. But their commitment, dedication and desire suggests that things may change. Certainly, if D’Costa david, club founder, has his way that change will be sooner rather than later.

“The name of our club is the Pink City Footy club and we play in ground of area like a park with sand and dirt. We have 20 to 30 players and for competition we play against each other.”

D’Costa first learned of Australian Rules football in 2014 and immediately fell in love with the game and wasting no time converting friends and family to his new love. “I started the Pink City Footy Club from 1st June officially. I want to do a lot of things. I want to be a big player in AFL and make a wonderful, big ground for practice and matches.”

“I will have a coach to teach us how to play footy [and learn] skills for our club's player's. We want to play other teams in India and want to come to Australia to play footy.”

The fledgling club knows that they have a long road to travel, and getting equipment is a part of that. “We need equipment like balls and [tackle] bags.” D’Costa is only too aware that the only way to keep the enthusiasm for the game going is to grow and to do so they want to be able access the things that help a footballer, or club, learn and improve.

The Triceratops are yet another example of how the great game of Australian Rules football is capturing the imaginations of people worldwide, and particularly across India as rabid followers get hold of Sherrins, Ross Faulkners and Burleys and grow.

D’Costa’s dream is a dream shared by more and more. But at the moment he and his team mates are starting small in the suburbs of Jaipur and who knows where they will go from there.

World Footy News has the contact details for the Pink City Footy Club and if there are clubs out there who want to help the Triceratops, get in touch. It is stories like this one that warm the hearts of those who love the game and its international growth, and maybe there are some out there who can accelerate that growth.

And the Pink City Triceratops would be delighted with that.