Ironically the week after AFL South Pacific graduate Kurt Heatherley made his senior AFL debut – a young man from Vanuatu will lead the Sydney Swans onto the field in their crucial match against St Kilda this weekend at Etihad Stadium in Melbourne. Keep a look out for the Vanuatu flag.

12 year old Charlie Helme was the pride of his year 7 class at Ecole Colardeau school in Port Vila – and when interviewed on 96 Buzz FM he admitted to being a “little bit scared” at the prospect. Read more from the Vanuatu Daily Post[*1] .

Helme has been a participant in the Vanuatu version of Auskick – which this year saw AFL Vanuatu run a main 8 week ‘Pikinini Kik’ program earlier this year finishing up in May.

The program was held at Kazza Field (behind Korman Stadium) every Saturday morning with more than 60 kids involved. The program wrapped up in late May with a ‘closing ceremony’. On the final day the kids were awarded certificates as well as AFL shirts and caps donated by AFL clubs in Australia. AFL Vanuatu ran the program with the help of 5 coaches – and received tremendous feedback from the parents of the participants. The program was primarily sponsored by Vanuatu Spirit, as well as supported by TNT with local manager Dan Deaken attending the final day. See Charlie below in Swans gear. 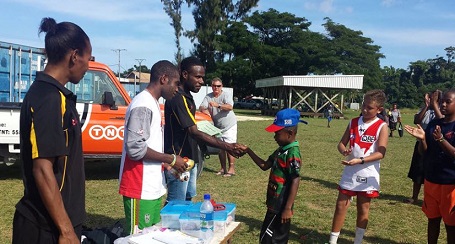