Hutt Park Wellington plays host today to the Wellington AFL 2016 Grand Final. First bounce at 3pm will see the Wellington City Saints engage in battle with the Eastern Suburb Bulldogs who have played in every grand final for the last 10 years and are gunning for a FourPeat.

For the Saints, it is former player and 2nd year coach Gregor Kempt has the task ahead of him of undoing the Doggies. The Saints have focussed over the time on developing a great culture and building player numbers. Key senior players for them today will include Jason Cox and Conner O’Fee, along with a lot of enthused and talented youth that add excitement to the combination. The Saints squeezed into the Grand Final ahead of the Hutt Valley Eagles.

The Bulldogs under coach John Jackson are led on field by skipper James Terry. All season their defensive pressure has held supreme – and have conceded just over 2 goals a game as they build an almost impenetrable defence. Some of the keys have been Shane Wineera, Luke Shervey, Matt Lewis, Micheal De Fazio and Hugh Wilson. The midfield has been well served via Stan Chung and 4 time Grand Final BOG in Peter Halstead.

The Bulldogs clearly go in as raging hot favourites – undefeated not only in end results in season 2016 – but also yet to drop a quarter. Clearly all the expectation lies with the Bulldogs – however the Saints have nothing to lose and enter the contest as the hunter.

A footnote – Peter Halstead is also an accomplished soccer player for the Miramar Rangers. At age 32 he is extending his AFL NZ focus this season and is participating in the AFL New Zealand Premiership where he has been drafted into the Northern Suns line up. At 190cm Halstead plays in the ruck – and has been playing in the Wellington AFL for about 5 years and also played while in Sydney completing a Master of Physiotherapy course. Halstead has set his sights on getting to Melbourne next year for the 6th AFL International Cup. Northern Suns picked him with their first pick for the 2017 Premiership – having retained 12 players from last season. /p> 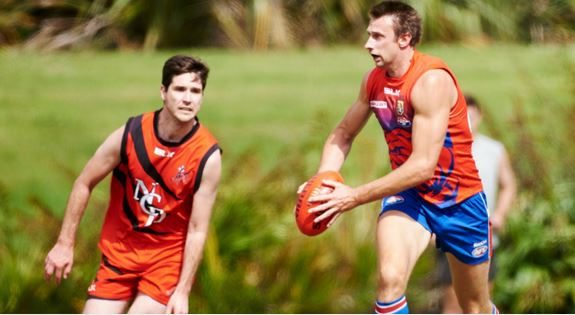