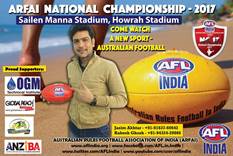 The 5th instalment of the ARFAI National Championship has been held in Howrah Maidan, Kolkata at the Sailen Manna Stadium. The event boasted 12 teams across two divisions, with the best 200 players from across the nation representing seven Indian states.

With VFL/AFL legend, Kevin Sheedy, on hand to promote the game in India and mingle with the excited players and personnel at the event, last weekend’s tournament was a huge success.

The AFL India Facebook page stated, “What an amazing three days at the AFL India carnival - the ARFAI National Championship 2017 - the 5th edition.”

“The Jharkhand Crows - Australian Football won both the titles for both junior and senior divisions in style.”

“In the senior division, the Crows defeated the Bengal Tigers (who were the defending champions for the last three nationals) after an very exciting and evenly fought Grand Final 3-3-21 to 2-7-19.”

“We also had the Bendigo Umpires Association President and Vice President Craig Findlay and Paula Shay take our leaders through a wonderful umpiring workshop earlier in the day.”

For now, the Jharkhand Crows are the toast of Australian Rules football across India and have raised the bar even higher ready for next year.
With Kevin Sheedy now taking a firm interest in the further development of the game in India, next year could be even bigger, bolder and better again.

Picture: Jharkhand Crows players with their dual trophies from the event in Kolkata. 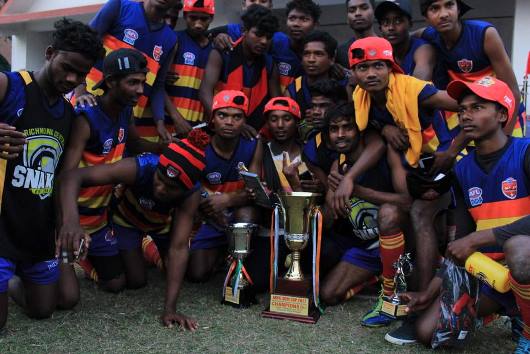