Footy Around the World: Fiji

We welcome new contributor Frederick Shaibani.  We recommend you check out Frederick's Blog Letters from Las Cruces[*1]  to read more.  The original post for this article can be seen here.[*2]   Frederick is a member of the Los Angeles Dragons Football Club.[*3]  In this article Frederick takes a look at the story of footy in the Pacific nation of Fiji.

One of the most sport-crazed countries in the Pacific, the islands of Fiji have long lacked a presence in Aussie rules football. It’s overshadowed significantly by rugby union, the Fijian national sport, but footy has made some strong gains in recent years.

AFL matches were first televised in Fiji in 2002, and the league saw that there was potential to reach the Fijian population and help establish footy as both a spectator sport and a participation sport. By 2005, the Fiji Daily Post had beat writers covering AFL games, in addition to the much more established sports of rugby union, rugby league, and netball.

Around the same time, a group of Aussie police officers stationed near the Fijian capital of Suva helped get some local athletes involved. The Aussies founded the Fijian Australian Football Association (FAFA) that year, with the goal of keeping it as the national governing body for footy. They attempted to get a national footy team into the 2007 South Pacific Games, which were being held in Fiji, but they couldn’t qualify in time due to a lack of players and funding. The FAFA went on hiatus as they attempted to organize a local competition.

Shortly thereafter, the Western Bulldogs became the first AFL team to actively start scouting and recruiting Fiji-born players, holding combines in the cities of Suva and Labasa. The project bore immediate fruit for the Bulldogs, recruiting two Fijian teenagers, Solomon Loki and Inoke Ratu. Both youngsters – originally budding rugby players – were picked by the Bulldogs as international scholarship players, but they were unable to get Australian visas due to the country currently enforcing sanctions against the Fijian government. (Ratu’s visa situation was eventually able to be resolved, and he played footy at the lower levels in rural Victoria.) 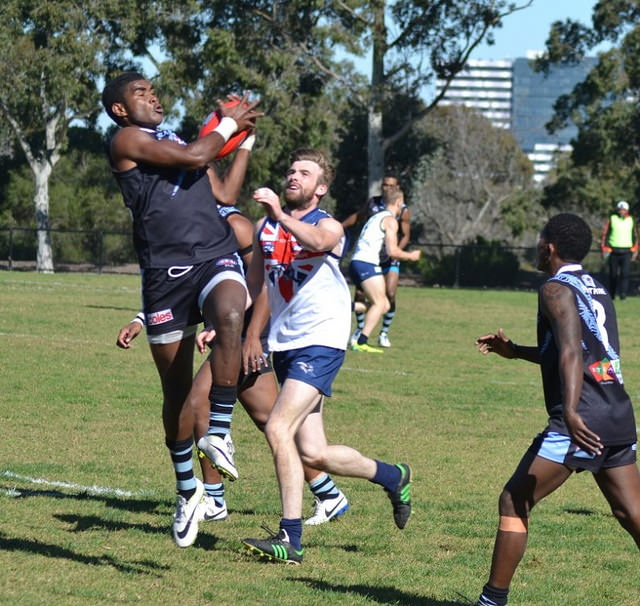 There were more positive developments for Fiji footy in 2008, when AFL Oceania was founded. AFL Fiji was formed the following year and quickly released a list of objectives in order to grow the sport on the islands:
•To offer Fiji’s youth another sport whereby they may develop to their full potential
•To thereby establish and promote Australian football, commonly known as AFL, in Fiji
•To achieve these aims through organization of national inter-school and inter-club competitions
•To foster participation in international AFL competitions
•To provide assistance to AFL clubs interested in Fiji recruits

In 2010, the inaugural AFL David Rodan Cup was held. Named for the popular Fijian-born AFL player, the Rodan Cup featured a round-robin tournament among 14 different schools. By all accounts, the event was a smashing success, helping to show the sport on a large scale to Fijians for the first time.

Shortly thereafter, the Fiji Power was formed as the national footy team, competing in December 2010 at the Under-16 Oceania Cup in Tonga. With that experience as a springboard, the Power were selected to compete at the 2011 International Cup, which was held over two weeks in both Sydney and Melbourne. The Power surprised many, winning the Division 2 championship in decisive fashion over France.

Aussie rules is growing rapidly in Fiji to this day, with specific outreach programs for kids and an increased focus on player development. It’s an exciting time for Fijian footy, and hopefully many more players will be able to pick up the sport in the near future.

FIJIANS IN THE AFL
•Charlie Moore (played 1897-1899) – Fijian who moved to Melbourne as a kid and later played in the early years of the AFL (then the VFL). A cousin of future footy legend Roy Cazaly, Moore played in 30 career games before giving up his pro career to fight in the Anglo-Boer War in South Africa, where he was killed in action in May 1901. He was the first professional footy player to die in any major war.

•David Rodan (played 2002-2013) – Born in the town of Lami, Fiji to Tongan parents before moving to suburban Melbourne at the age of three. He showed a natural aptitude for footy as a teenager and was eventually drafted by the Richmond Tigers in 2002. He played in 65 games with the Tigers as a forward/midfielder, before moving to the Port Adelaide Power in 2007, where he kicked 86 career goals in six seasons. Rodan retired in 2013 and has since found work as an AFL umpire. He even won the Australian version of Dancing With the Stars in 2014.

•Alipate Carlile (played 2006-2016) – A cousin of Rodan’s, Carlile hails from Lautoka, Fiji, but grew up in Wangaratta, Victoria. He played soccer and basketball for most of his childhood before beginning his Aussie rules career with the local club, the Wangaratta Rovers. A noted defender, Carlile played alongside Rodan at Port Adelaide for six seasons before retiring last year.

•Aaron Hall (played 2012-present) – Originally from Tasmania, Hall’s mother is Fijian and his father is an Aussie. He was drafted in 2012 with the seventh overall pick, and as of last season, he has played in 69 career games with the Gold Coast Suns. His dad, Dale, briefly played for the Sydney Swans in the early 90s.

•Nic Naitanui (played 2009-present) – A star ruckman, Naitanui has spent his entire career so far with the West Coast Eagles. His parents were of Fijian descent, but Naitanui and his siblings grew up in the Perth area. Naitanui is widely considered one of the best ruckmen in the game right now, but he will likely miss the entire 2017 AFL season due to an ACL injury.

•Esava Ratugolea (played 2017-present) – Ratugolea, a forward, is of Fijian descent and was drafted by Geelong in 2016 with the #43 overall pick. He played under-18 footy with the Murray Bushrangers in the TAC Cup competition.

•Wes Fellowes (played 1981-1989) – Of partial Fijian descent on his mother’s side, Fellowes was raised in Bulleen, a northeastern suburb of Melbourne. A ruckman, he played 102 career games for Collingwood, following in the footsteps of his late father, Graeme. He won Collingwood’s best and fairest award in the 1986 season.

•Setanta Ó hAilpín (played 2005-2013) – Born in Sydney to an Irish father and a Fijian-Rotuman mother. Ó hAilpín moved to County Cork, Ireland at the age of five, and he was a star player in the All-Ireland hurling competition from 2000-2003. He took many by surprise when he moved back to Australia and decided to give footy a shot, first with Carlton (2005-2011) and then with Greater Western Sydney (2012-2013). Ó hAilpín primarily played as a full-back/ruckman and kicked 82 career goals in 88 AFL games. He also represented Ireland in the 2004 International Rules Series, a unique competition in which Gaelic footballers and AFL footballers play under a set of hybrid rules.

•Tom Nicholls (played 2011-present) – A ruckman from rural Victoria, Nicholls was born to a Fijian mother and an Australian father. He played footy in the TAC Cup competition with the successful Sandringham Dragons team, before debuting for the Gold Coast Suns in 2011. Nicholls received an AFL Rising Star nomination early in the 2013 season, too.