FOOTY AROUND THE WORLD: Nauru

The following story originally appeared on Frederick's Blog[*1]  and the original article can be found here.[*2]

The smallest island nation in the world, Nauru has a notable and sizable presence in the international Aussie rules community. With 680 registered junior and senior players out of a population of roughly 10,000, Nauru has the highest participation rate of any country in the world (30-35%).

That’s pretty impressive for a nation that is less than a century old and covers less than 10 square miles.

Nauru is a tiny phosphate rock island in the central Pacific, located just south of the Equator in the vicinity of several archipelago-nations, including the Solomon Islands, the Marshall Islands, Vanuatu and Kiribati.

The indigenous Nauruan culture features both Micronesian and Polynesian influences. After being liberated from Japanese control by Australian naval forces in 1945, a joint trustee partnership among the UK, Australia, and New Zealand helped administer Nauru in the post-war years. Nauru permanently became independent in January 1968. Its isolated location and lack of natural resources notwithstanding, the country has long been considered a major magnet for phosphate strip mining. 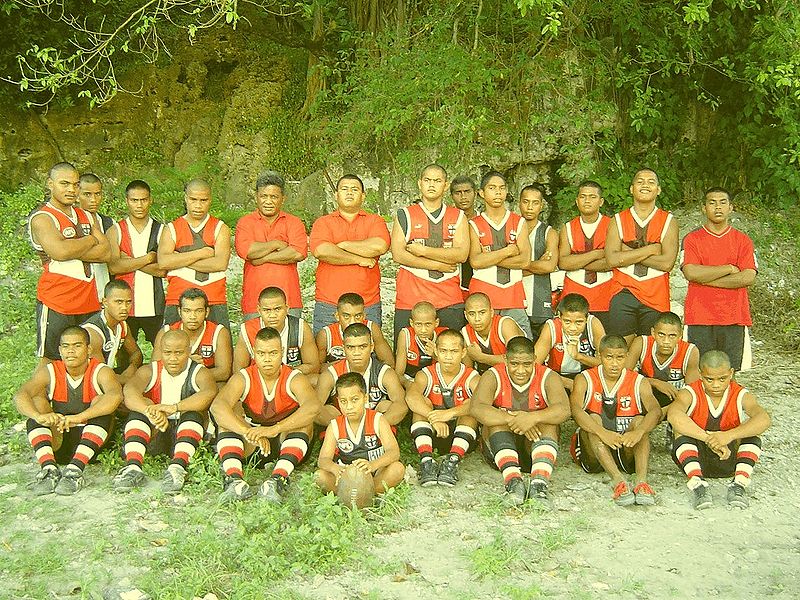 Despite its young and humble history, the country of Nauru is passionate about footy, which was first played on the island in the 1930s and is currently administrated by the Nauru Australian Football Association (NAFA) under the auspices of AFL Nauru. The country’s only major stadium, Linkbelt Oval, hosts footy matches annually, and the NAFA Grand Final is a major annual event on the island, regularly drawing crowds of 3,000. In addition to weightlifting, Aussie rules is considered the national sport of Nauru.

Nauruans have played footy dating back to the pre-WWII era, when a large number of Nauruan children attended schools in the football-crazy Australian cities of Geelong and Melbourne. Even Hammer DeRoburt, the first president of Nauru (1968-1976), had a footy background from his days as a student and teacher at the Gordon Institute of Technology in Geelong. 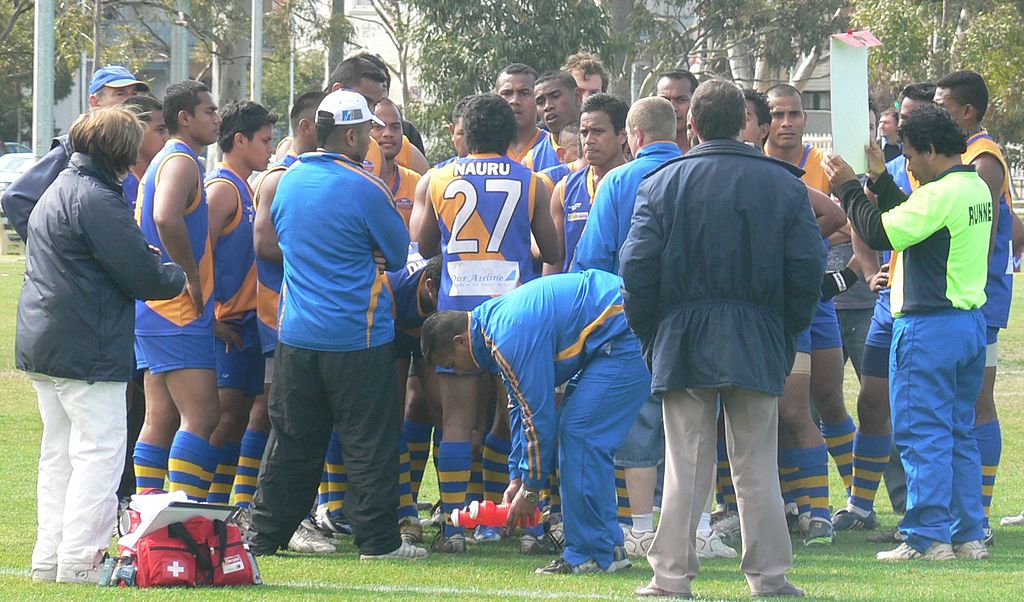 The Nauruan national footy team is known as the Chiefs, and they have participated in numerous international tournaments, including the Australia-based Arafura Games in 1995 and 2001. The Chiefs have also competed in the triennial Australian Football International Cup, placing four different times, including a fifth-place finish in 2005.

Nauru also competed in the Web Sports Cup in both 2000 and 2001. The Chiefs won two notable matches both times, including one against a Queensland team from the Gold Coast, and another against the team from Samoa. In 2003, Nauru’s junior team got a chance to play in the Barassi International Youth Football Tournament; they fought hard, but suffered defeats to teams from both the Australian Capital Territory and New Zealand. Other young footy players have had chances to represent Nauru at tournaments like the Oceania Cup and the NAB Under-16 Championships.

Today, Nauruan footy, as represented by the NAFA, has a dozen teams in two separate divisions, representing nearly every local district in the country. While the NAFA is formally recognized as an international partner by the AFL, the league also receives sponsorship and funding from Nauru Airlines, local banks, phone companies, and hotels.