Thanks to AFL Nauru for Round 1 details.

The 2017 Senior competition kicked off with 3 games. The Hon. Minister for Sports attended the opening and tossed the coin to launch the first game. The Opening round was sponsored by Capelle & Partners and Australian Aid.

Bulldogs vs Kangaroos
The first was the Grand Final replay between the Bulldogs and the Kangaroos. After a tight first quarter, the Bulldogs stepped up a gear in the 2nd and 3rd quarters with their star players in Niga Haulangi, Patrick Agadio, Deiri Cook and Nanitten Temaki leading the charge. Donatello Moses was lively up forward but it was Jose Uepa who normally play defence who was unstoppable in the forward line bagging a personal best of 6 goals. For the Roos, Mikey Hiram won plenty of the ball and he was supported by Jarmen Pole and Charles Dagiaro.

The dangerous Bronco Deidenang was their only shining light up forward kicking 7 goals. Recruit Skaga Dowabobo also performed well and held his own against Bulldogs ruckman Lennox Agege. In the end, the Dogs had more options and more winners across the ground running out comfortable winners by 38 points. 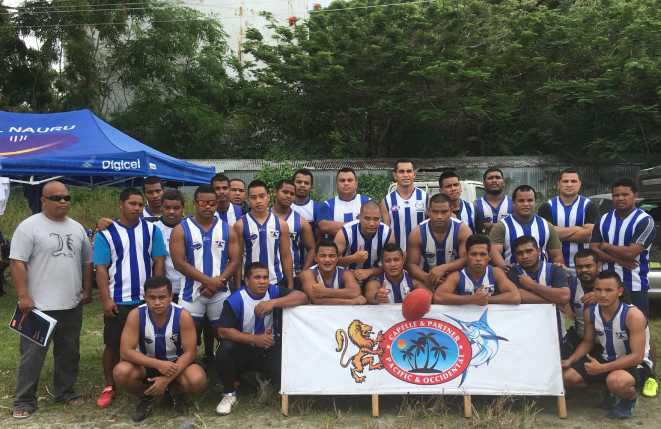 Magpies vs Cats
The 2nd game between the Magpies and the Cats was a keenly contested game, with the Magpies eager to erase the horror season last year. The super competitive Cats looked gone at stages of the game but they kept coming back and only trailed by 4 points heading into the last quarter. However in the last the Magpies steadied and with their twin towers in Yoshi Harris and Richmond Spanner playing up forward in the last quarter they outgunned the Cats to win by 20 points.

No 1 draft pick Richmond Spanner proved his worth playing a pivotal role in the ruck and up forward kicking 5 goals in an outstanding game. Yoshi Harris was equally dangerous bagging also 5 goals for the Pies. For the Cats young recruit Sheik Daoe was sensational in his first game. He took several contested marks and could have kicked a bag of goals if he had been more accurate. Shawn Kemp Maaki and Pilo Dagiaro also played well along with veteran Cat Trent Depaune. For the Pies, Odrae Stephen and Teolime Kamtaura played well in defence, with senior players Mal Batsiua, Bagewa Detudamo and Dave Mwaredaga picking up many possessions around the ground.

Bombers vs Hawks
The final game between the Bombers and Hawks was tipped to be a close game and it didn’t disappoint. In a high scoring affair, the Bombers looked home and hosed leading by 45 points heading into the last quarter. But the high flying hawks soared in the last quarter as they kicked 8 goals to hit the front in the last minute. In the dying seconds the Bombers Daniel Daniel won a crucial down the field free kick. The final siren went and Daniel had to kick truly to win the game. He did and the Bombers won by 5 points, with a kick after the siren.

For the Bombers Kingston Ika, Kaison Tatum, German Grundler and Johnny Dagiaro were amongst their best, while star recruit Khyde Menke was a dangerous target for them up forward kicking 4 goals. For the gallant Hawks the strong marking forwards in Jamie Tagamoun and Cazaly Jeremiah were a handful for the Bombers defence kicking 9 goals between them. Promising young talent Zillman Gioura showed glimpses of his potential kicking 2 great goals for his team. The last quarter charge by the Hawks was led by their hard runners in Jeremiah Kam, Darnel Diema, Ishmael Fritz and Maverick Batsiua. Recruit Abwit Aliklik was also prominent in winning crucial contests when the game was in the balance. They charged hard and came close to snatching a very unlikely win, but the lucky Bombers just got there in a memorable contest.