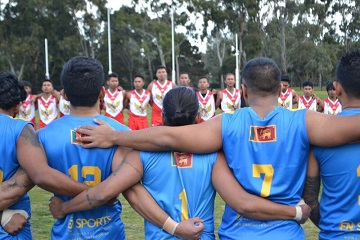 Perhaps not the clash of traditional rivals however the AFL International Cup debut of Sri Lanka Lions, on a chilly Melbourne August morning was an important moment in time for a proud sporting nation. Their opponent – the Indonesia Garudas – back after a tough campaign in IC14. The scene – the Royal Park Western Oval under wintry Melbourne skies.

Hariyanto HARIYANTO (#6 Garudas) kicked the first goal of the match with 3:42 on the clock. The Garudas had all of the attacking play to start of the match and via their skill and team work had the ascendency around the ground. Sri Lanka were unable to get it past the centre and into their forward line.

Generally scrappy as the teams settled - finally the Lions had their first inside 50 of the match with the 8:52 on the clock and they kicked towards goal and scored a behind.

As befits international footy – the contest was fierce - and Irvan BAHFEN(#25 Garudas) hobbled slowly to back his position after he came off second best. 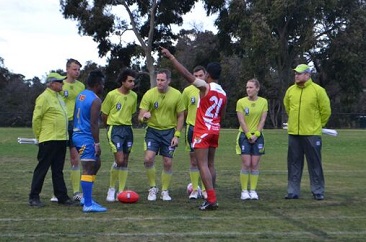 Indonesia begun the second term as they ended the first term with all of the ascendency. Indonesia were winning the ball at ground level and in the centre. Dilla syah ABDILLAH (#28 Garudas) kicked from 50m out and the footy fell short in the goal square and Timbul Kukuh SANTOSO (#21 Garudas) kicked a nice opportunist goal of the ground.

Indonesia kicked a point and 31-1. Indonesia were leading the clearances and were a bit more creative with their handball and kicking skills. As a few of their players were playing in their second International Cup.

Joshua PASARIBU (#18 Garudas) kicked a behind and Indonesia led 32 to 1. Ramanushan GOWRISWARAN (#52 Lions) kicked Sri Lanka's first goal of the match and their first goal ever in International Cup footy. All of his teammates were full of excitement and they came running from all over the ground to celebrate and to get around him (#52)

Michael Latuperissa (#2 Garudas) is a bit of a general in the backline as he was holding the backline together. Garudas were basically in control of the match and just needed to see if they could run out the rest of the match. At the start of the third quarter, Sri Lanka gained possession but turned it over to Indonesia who kicked it inside 50 again. Michael Latuperissa (#2 Garudas)) is nicely balanced in the midfield.

Sri Lanka were deep in attack but coughed the ball up to Indonesia who marked it in their defensive 50. Indonesia were all over the Sri Lankan team in the middle. Both interchanges were cheering their teammates who were playing on the ground. Sri Lanka had there best passage of play for the match as they were able to get the ball going from the centre with exchanges of handballs to Panchama Ranasinghe who kicked for goal but he just kicked a behind.

Busah BALA(#11 Garudas) was down and in the hands of medical staff who were taking him off the ground on the stretcher with the time 12.27. The medical staff took him off the ground, he got off the stretcher and back to his feet and walked slowly with the help of the trainer. Indonesia were all over Sri Lanka but were unable to capitalise on the scoreboard with goals. Just before the siren sounded for three quarter time Bayu PRATAMA (#23) kicked a goal.

Indonesia kept on winning the crucial contests in and around the ball and that is how the last quarter has begun. Boy Sabar Pasaribu (#1 Garudas) went down behind play, as he came off second best in the tackle. Rico KOBELT (#14 Garudas) won a lot of the ball early in the last quarter. Joshua Tandilangan (#27 Garudas) kept on taking intercept marks in his back defensive 50. In the last 10 minutes, Sri Lanka were all over Indonesia and had the momentum going there way. Ashan Anthony (#7 Lions) kicked Sri Lanka's second goal of the match at the 13 minute mark of the last quarter and all of his teammates were stoked. Shean VANDERWERT (#23 Garudas) kicked truly for a goal. Hariyanto HARIYANTO (#6 Garudas) kicked from 50 and the kick just fell short and dribbled out of bounds for a stoppage and ball up.

The Indonesian team (Garudas) were the stronger team for the first three quarters of the match as they outscored the Sri Lankan team. The skills of the Sri Lankan (Lions) players improved as the match went on and as a result they won the last quarter outscoring Indonesia 1.1.7 to 2.0. 12. Michael Latuperissa (#2) was Indonesia's best player of the match. Sri Lanka were a little less even with talent across the field, but as the match progressed their skills enhanced considerably. 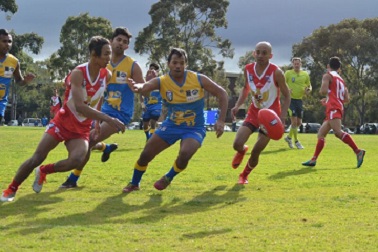 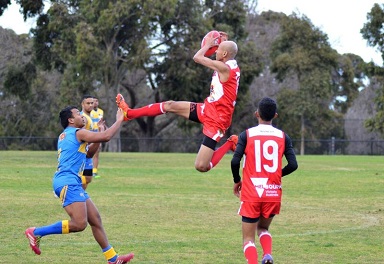