NZ Hawks too tall and clean for Nauru Chiefs 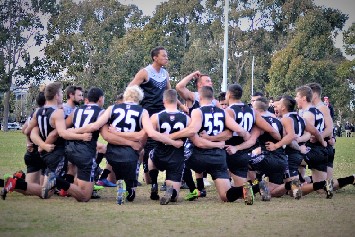 The late game for the day provided a power packed pitting of Pacific protagonists – New Zealand Hawks taking on the Nauru Chiefs. The rain had thankfully passed - however as this 3:45pm game progressed the sun also began to pass - as the moon rose in the East the lights were flicked on, with limited benefit to the onlookers.

The New Zealand squad had the height advantage and match up pretty well on weight so wouldn't be pushed around. Nevertheless there were some fierce clashes and players on both sides will wake up sore tomorrow morning.

The Chiefs began with what might be regarded the scoring end - favoured by the breeze however from the first ruck contest via the high leaping Ty Smith (#25) it was clear the Hawks height would worry the Chiefs. The Hawks dominated the early stages of this game and set the theme early for this late afternoon match. Strong marking up forward, especially by Barclay Miller (#21), was causing a headache for the Chiefs. Miller completed a specie for the first goal. Shortly after Liam Beattie (#18), coming off the bench, snapped the ball forward where Clark (#50) got on the end of it to put through the 2nd. Early on skipper Howison (#10) was proving a ball magnet, along with Christensen (#9). The Hawks were cleaner by hand while the Chiefs were struggling to get clear from the stoppages. Noticeable early was the heavy use by the Hawks of the bench with high rotations, especially through the midfield. Further goals to Gregson (#22) and Kusel (#55) surged the Hawks to a 25 pt advantage at the first break - with the Chiefs unable to penetrate.

The 2nd term saw the Hawks slam through the first 2 to set up a match winning lead already - via Hick (#32) playing on quickly with the advantage free followed by Clince (#14) receiving from exciting youngster Faimalo (#2) and snapping from tight in on the boundary. Finally at 4 mins 10 into the 2nd term the Chiefs finally broke the ice (almost literally - the wind blowing cold) - via Spanner (wearing #20) with a long range shot that scraped in over the Hawks on the line. The footy tightened up as the Chiefs lifted their work rate and pressure acts. A rushed behind to the Hawks but at 9:43 in and it was Spanner again who showed the better judgement to mark in front of goal and convert truly. Were the Chiefs back in the game? Narrowing the margin back to the 1/4 time extent - however that was pretty well it. The Hawks finished the quarter with 2 more goals via McKenzie (#6) and the classy Faimalo (#2). The McKenzie goal indicative of the Chiefs concerns - 3 up in defence due to the worries about the aerial supremacy of the Hawks - leaving McKenzie alone to scoop up the loose ball and dribble a goal through the unguarded goal mouth. So into the main break and the Hawks had pushed it back out to 39 points and playing the game on their terms.

The 3rd term was all New Zealand on the scoreboard - only one behind to the Chiefs while the Hawks - inaccurate at first, got their radar a little straighter to finish off with goals to international veteran Rattenbury (#15) with a final long goal from the left flank followed late in the term buy Miller (#21) again imposing himself with a big grab deep forward. The Chiefs had been constantly forced back to defend and were unable to clear their defensive zone with the Hawks setting up well behind the ball and continuously sending the ball back into attack. 54 pts at the last break.

The last term was actually won by the Chiefs - allowing them to take some momentum into their next contest. Attacking early the Chiefs looked sharper, although found little reward for their hard work until 5:33 in when winger Diema (#3) intercept marked and converted from a long way out. The Hawks responded with the next couple of goals (Kusel #55 a long bomb to the vacant square and Donnell-Brown #11 after a centring mark) to again put down the Chiefs challenge. However from there on, the Chiefs ran out the game with 2.2 to gain some respectability on the scoreboard however it was too little too late. The Chiefs hadn't been able to ensure sufficient supply to the big guns up forward although the few chances that Oppenheimer (#11) had were sprayed across goal and Yoshi Harris (#28) was barely given a look in within the forward 50. 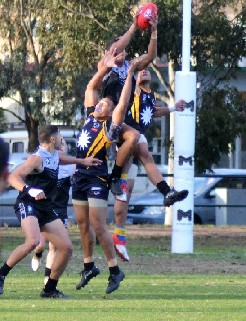 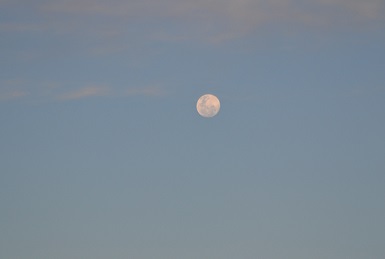 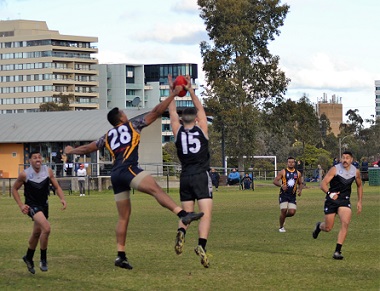