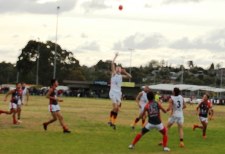 On one of those windy August days, out in suburban Melbourne, came the clash of two of the favourites for division 2 men’s – Japan and Germany.

Although in the same pool, it seemed like an anticipation of a key final, after both had easy victories against their opponents in earlier matches.

Image left: 'Where eagles fly but Samurais on the ground'

Played at Box Hill North, where Elgar Rd meets the eastern freeway, the ground has an old Japan Samurai connection, as scholarship players have gone to the Box Hill North amateur team in the past.

Not quite a home advantage, although Japan has played there at earlier ICs.

Germany, the big strong German team, is the product of a competition almost as old as the JAFL, but was making its debut at the International Cup.

Dispersed teams from Hamburg in the north to Munich in the South, Frankfurt in the west and Berlin in the east, meant that the Germans had never quite got it together to create a national team.

It was also a meeting of different sizes and skills. In their earlier matches the Japanese, although slightly smaller (the biggest players tend to be about 180-185 cm) played with a system and skill which few AFL teams could match, with strings of handpasses and low kicks to the forwards after taking the ball out of the centre, supported by strong tackling. 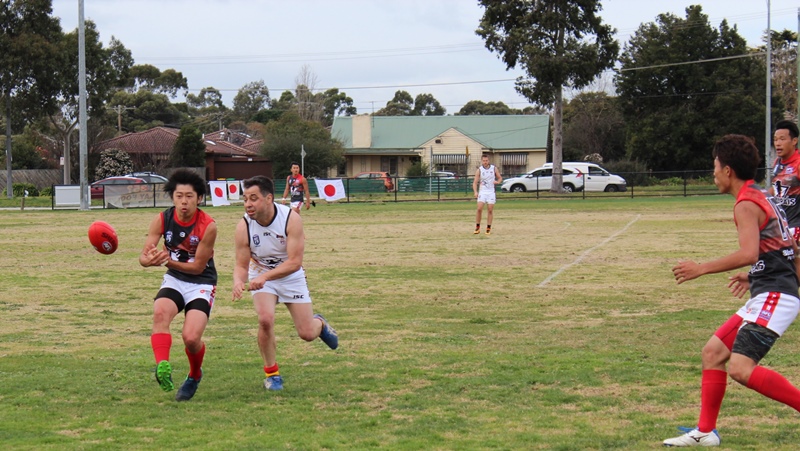 In past International Cups, the Samurais’ run and speed was never quite enough as they fell to physically stronger and marking teams later in the match.

Would this division 2 game produce a victory for the Japanese style of play? Or did the Germans have their own systematic approach and skills as well as physical presence, with the Eagles soaring over the Samurai? And would the winds of the last week have an influence, either on low passing or on long kicking? Or would Melbourne have a respite from occasional wind and rain in early August?

The game opened with German aerial dominance and long kicking as Germany’s Constantin Pixa from the Frankfurt Redbacks at 199 cm and 93 kg dominated in the ruck. However Germany was having trouble putting a score on the board and would finish the quarter with only two points, after the 200 cm Rheinland Lions player, Johannes Orlowski put the ball out of bounds.

Despite the confident high marking and beautiful left foot kicks of German captain Florian Naumann in the backline, turning back some Japanese attacks, it was the Japanese mosquito fleet of running players who were dominating over a side with eight players over 90 kgs on their list, especially Kyo Nakagawa up forward and Yudai Yamaji.

The Japanese system of a ball knocked out of a ground contest to another player who then handballed to a player running past contrasted with the German lack of system. Whereas most of the Japanese players came from Tokyo and the Germans from across the country, with only two camps in Frankfurt before coming to Australia, the Germans were struggling.

On several occasions the smaller Japanese players including the dominant player on the field, Japanese captain Mitchito Sakaki, at 166 cms, were out-marking the taller Eagles players. When they didn’t several players swooped on the ball at ground level, beating the Germans for speed, fitness, skill and teamwork.

It was rather like the mobile ships of Francis Drake defeating the less mobile Spanish Galleons as the English repelled the Spanish Armada. Commentator Rex Hunt may have called the ball the ‘aerial conveyance’, but, except for kicking goals, the game is mainly played at ground level.

Had the Germans held their marks and kicked straight they might have been in the game. At the same time a lack of experience came over as clumsiness, and giving away free kicks. Japanese fierce tackling of taller Eagles players resulted in further holding the ball free kicks. It was a surprise that the smaller size players were hitting harder in tackling.

In the third quarter, some Samurai players seemed to tire, even as a long Japanese goal before the siren increased their lead to 5 3 33 to the Eagles 2 3 15.

Footy talk was there on the field and on the boundary line at ¾ time as Japan’s coach Brett Although was backed up by a translator whilesome German players in the huddle were uttering ‘Schiesse’, a sign of frustration. Later, when a German player roughed up a Japanese player after a tackle multilingual spectators put their oar in about this ‘langsam Dummkopf’ (slow fool or something like that.)
In the last quarter, Japan defended its lead against the wind, taking the ball out on the Elgar Rd side of the ground and on one occasion it bounced over the fence and went off almost to join the busy traffic.

A scrambly last quarter was perhaps inevitable after a hard fought match and although the Eagles goaled just before the final siren the result was never in doubt. 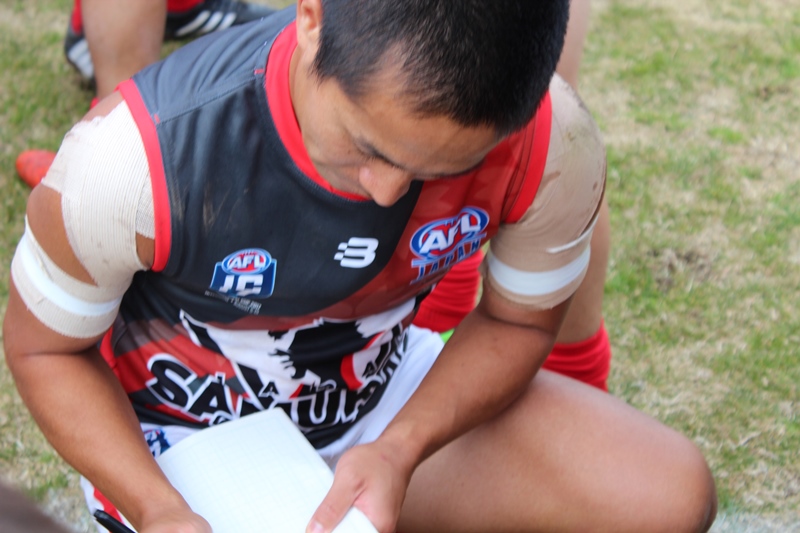 After the Japanese had thanked their supporters, and Mitchito Sakaki signed autographs for young kids, the teams gathered for a shared photo.

Then, the real winner was recognised as a group cheer went up from everyone for what really mattered – ‘Footy!’ 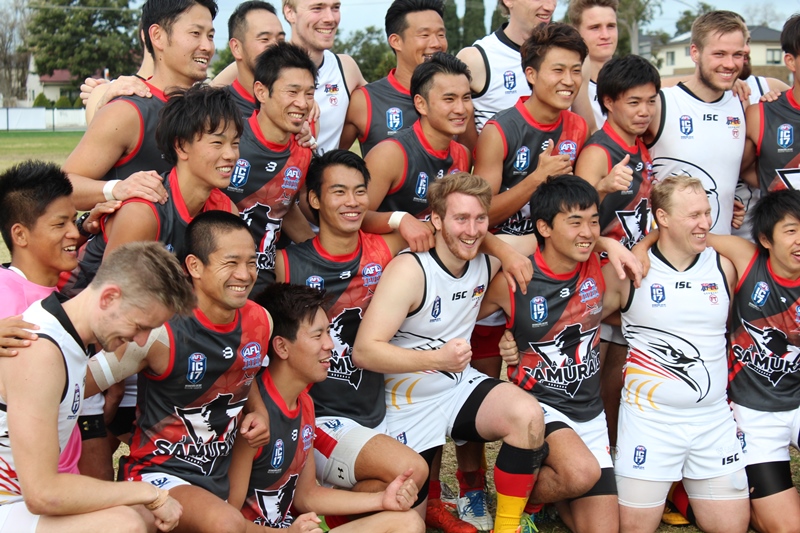