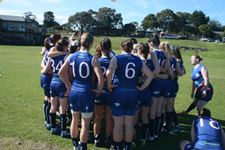 August 9, 12.15pm BY TIM MILLER for AFL Europe (Thanks Tim and AFL Europe for the report and pictures)

The GB Swans have continued their winning ways in the International Cup, fending off a spirited fightback from Fiji to record a 9-­‐point victory, their second in a row.

A goal to Caroline Sellar with just four minutes left steadied the Swans after the Vonu closed to within three points early in the last term, and some spirited defending, a staple of the game throughout, saw them hold on to win 5.3 (33) to 3.6 (24).

The Swans’ toughness and ferocious attack on the ball in muddy conditions at the Harry Macdonald Sports Ground, cheered on by a large Peninsula Grammar crowd, proved the difference in the end, with Lisa Wilson’s grit and determination allowing the Swans to win crucial contests with the match on the line.

It took only minutes to become clear that the Swans wouldn’t be allowed the sort of freedom afforded by Pakistan in their thumping win on Sunday, as the Fijians’ spirited attack on the ball and the player on display - but the Swans, led by Frankie Hocking and the tireless Wilson, matched them in the clinches.

And with the Vonu hampered by inaccurate kicking for goal-­‐ with no fewer than five balls sailing out on the full in the first quarter and a half-­‐ the Swans only needed to take their own chances to forge an early lead.

It seemed that they had left their goalkicking woes back in Melbourne as a trifecta of stunning majors from sharpshooter Danni Saulter  the first a sublime snap from a contest in the pocket, the second a clever soccer from close range, and the last a long­‐range snap that took a miraculous bounce through the big sticks ­‐ saw the Swans register the first four goals of the game.

Assistant coach Ian Mitchell was full of praise for his charges’ improved effort in front of goal, citing a mid-­‐week goalkicking session as a catalyst for the ultimately match-­‐winning performance.

“Seven or eight girls approached the staff early this week and asked for a kicking session,” Mitchell said.

“To do that is a real credit to their commitment and enthusiasm, and their desire to improve.”

In a snapshot of what was a tightly fought first half, Wilson was collected front-­‐on by a Fiji player on the wing, managing to not only bounce back to her feet, play on from the free kick and continue the match unimpeded, but continually throw herself at the contest time and time again, despite having her jaw checked on the sidelines immediately after.

“I’ve always been told to put my head over the ball, keep putting my head over it,” a delighted Wilson said after the match.
“If you don’t do that, that’s how you get injured.”

It took until late in the second term for the Swans to concede their first goal of the tournament, a free kick in the goalsquare for #22, but from there, the Vonu surged back into the game, keeping the Swans goalless in the third quarter to draw the margin back to just four points at the final change.

But with Beth Bailey a rock in defence after sneaking forward in the opening quarter for the match’s first goal, and Hocking’s delightful sidestep a highlight of an otherwise scrappy and close-­‐quartered contest, the Swans were able to hold off the charging Fijians, before Sellar’s ice ­‐cool conversion sealed the match for the Swans.

Mitchell said the side’s forward pressure, which allowed the Swans to lock the ball inside attacking 50 for long stretches, was a key focus heading into the crucial match.

“We felt that if we could keep the ball locked inside our forward 50 we’d be able to kick goals,” Mitchell said.

“Caroline Sellar was really important for us in there; she was laying some big tackles that kept it locked up.”

The Swans will next head to Diamond Creek to take on the in ‐form Canada, while Fiji have now lost two close games in a row (the first an extra time one ‐point defeat to the Northern Lights). 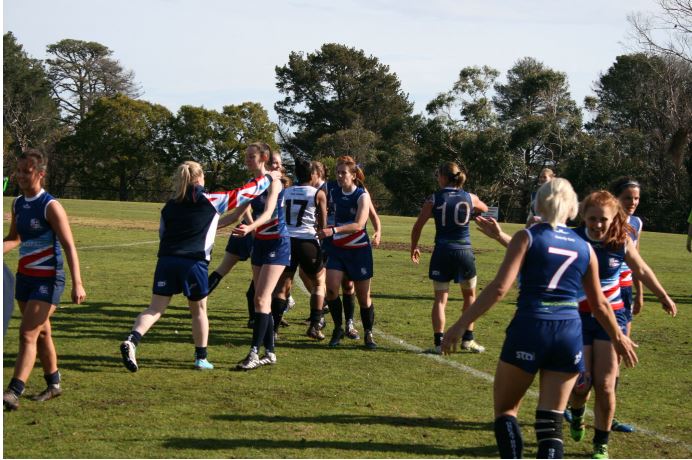