Miller's after the siren thriller brings heartbreak for Warriors 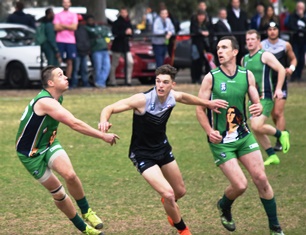 NZ and Ire went into today’s clash undefeated. PNG who had won against South Africa were watching on anxiously, knowing if Ireland were to lose, they would likely be playing in the Grand Final at the MCG.  If Ireland were to win then these two teams would likely replay for the 'Cup.
Rain that had been promised today did not eventuate but the breeze was blowing to the city end (2-3 goal breeze). The Irish captain David McElhone won the toss and kicked with it.
Christensen marked early in the pocket and went back and goaled from outside 35m out and into that breeze.
Misifili Jr Faimalo and Tipene-Thomas were in everything early for NZ. 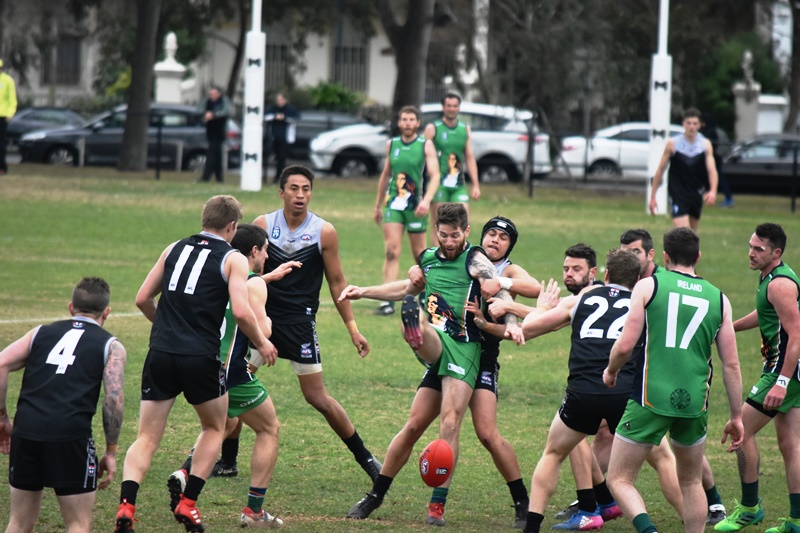 Two early behinds to Ireland was not the start they needed. At halfback they were able to hold up the Hawks advances with Paul Murphy the best of them early.
Ireland’s first goal was kicked by Padraig Lucey after a high kick into the square bounce high and he had first hands to it and snapped the goal (making up for his earlier out of bounds on the full from the set shot).
O’Dheasmhunaigh kicked Ireland’s second with a flying snap from the pocket as he was being tackled.
Barclay Miller should have kicked NZ’s second goal but hit the post from his set shot after marking strongly on the lead in front of the pack. 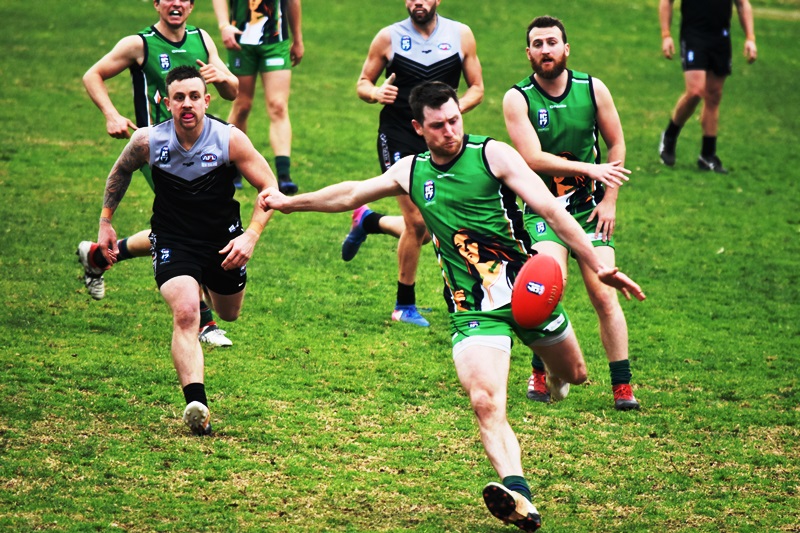 At quarter time the Irish had the lead 2.2 to NZ’s 1.1.
Kusel for NZ kicked one of the better goals of the day when he marked 15m on the goal side of the centre, and his long kick with the breeze carried over the leading pack and the ball bounced and rolled through the middle of the big sticks to bring the scores level.
Lucey and Nannery kicked behinds for Ireland into the breeze.
NZ once again took the lead when Ben Hick converted the goal from his free kick for high contact in the pocket. Howison added another one for the Hawks from 25m out straight in front getting on the end of a quick coast to coast transition.
The attack on the ball by both sides was intense but NZ looked to get more numbers to the contest and used the ball to their own advantage more often.
But still Ireland kept coming and Declan Nannery finally broke through and Declan Nannery made no mistake with his set shot for goal.
At half time it was a slender 3-point lead to NZ. 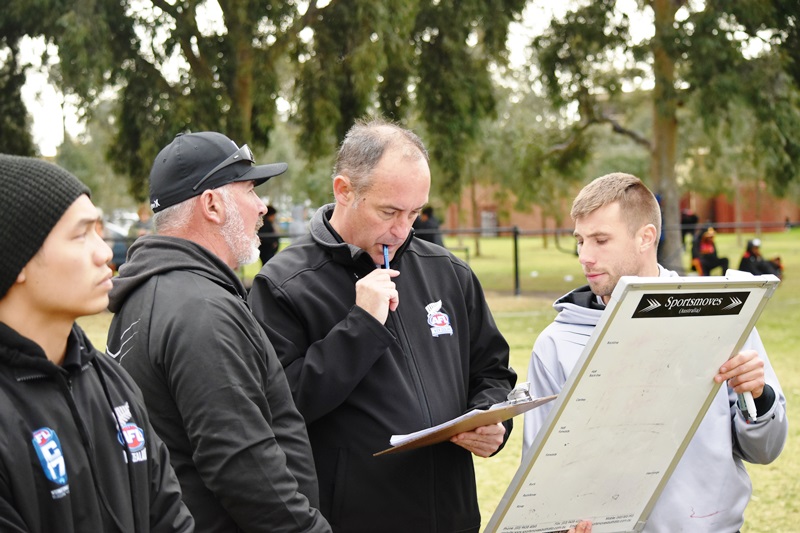 The third quarter was a tale of two halves. NZ looked like they had taken the game away from the Warriors when Shane Leat’s long kick came off the pack and Andy Christensen roved the ball at pace and ran straight in to kick the goal and then Sam McKenzie marked and goaled from 20m out after a push in the back. And that was into the breeze.
But big Padraig Lucey (who to that stage had kicked 1.2 and one out of bounds on the full) added two more quick goals for Ireland. The first off the ground from the pack on the goal line and the next from 45m out after the mark.
So a 4 point lead to NZ going into the last quarter with the breeze looked handy.
But that lead was quickly wiped out in the fourth quarter when Lucey again marked and goaled for Ireland. The Irish captain David McElhone hit Lucey shortly after for yet another to the big forward Lucey to put the Warriors 8-points up with 11 minutes to play. 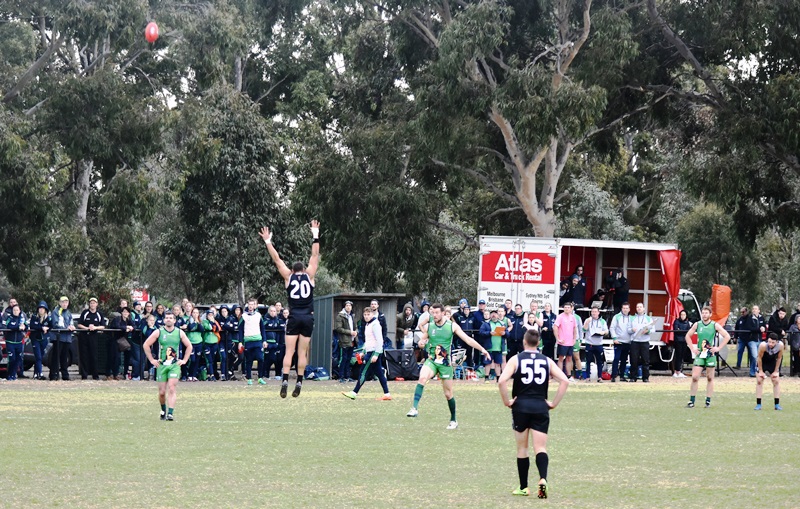 NZ’s Andy Christensen made the most of a 25m penalty to peg six points back for NZ from 40m out, Rattenbury’s miss pegging one more.
Tipene-Thomas first marked a kick at goal on the line and then one high ball within range as Ireland tried desperately to put and extra goal between them and NZ.
A free kick for a tackle off the ball to Domhnall Fogarty for NZ yielded just a behind after coming off defenders hands. This gave Ireland a 2-point lead with less than three minutes to play.
NZ did their best to work the ball forward through desperate Irish defence as they brought it down the ground. In the end, with seconds to play Will Gregson’s long flat kick to the pack at the top of the square was spoiled but the umpire’s whistle had blown.
The free kick for what looked like high contact while attempting to spoil NZ’s Barclay Miller left the St Kilda scholarship listed 18 year old with the set shot from straight in front 20m out. He went back and the siren sounded. He came in and kicked the goal truly (remembering he missed an easy one at the other end earlier). 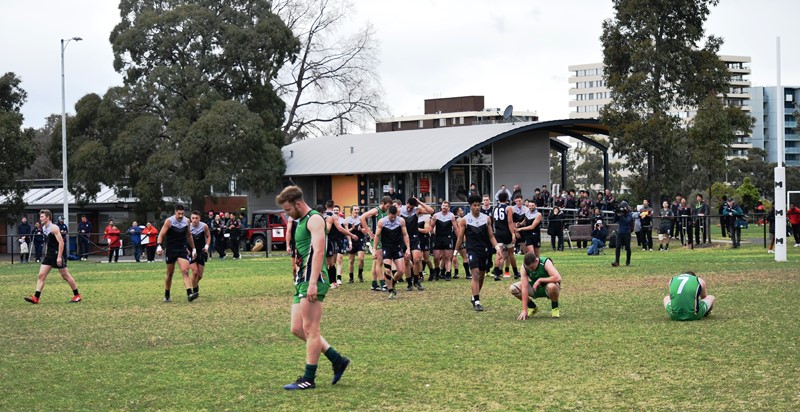 That kick for the win, and the scoreline meant that Ireland had not only lost but missed out on the Grand Final at the MCG on Saturday. NZ will once again play PNG in the International Cup Grand Final as they did in 2005 and 2008 (with a one-all tally).