The 6th AFL International Cup wraps up with Men’s Div 1 and Women’s Grand Finals to be played on Saturday. The Men’s Div 1 will crown the 6th AFL International Champion. The two competing nations – the New Zealand Hawks and the Papua New Guinea Mosquitoes – have been here before. In fact – PNG have featured in every decider thus far however must consider themselves a tad lucky to have made it there this year. Having won in IC08 and IC14, PNG are hoping to become the first nation to go “Back to Back”.

The New Zealand Hawks have worked their way back to the MCG after having last graced the hallowed turf in the decider of IC08 when they fell short against the Mozzies. The Hawks – or, at the time the Falcons – only other appearance was a triumphant one by way of victory in the IC05 decider. The only other nation to feature has been Ireland, on 3 occasions for 2 wins and a loss in IC14. A major question will be answered – will we have 3 teams with two trophies each or will the Mozzies move to the head of the table as the first nation with 3 tournament trophies.

The Hawks IC17 path has been – for 3 out of 4 matches – very much about setting the tone and largely dominating matches. Playing the late game on the opening day the Hawks were super impressive as they dismantled the well credential Nauru Chiefs. The Hawks balance across the field along with the ability to run midfield rotations off the bench and to not give up too much with the second stringers on the field proved very much the difference as they were able to retain fresh legs to cover the field and get numbers to the ball. Players such as Ben Hick in the pivot, the skipper Andrew Howison, Liam Beattie and Jackson Clince have had great support via the outside mids Te Kopa Tipene-Thomas, Will Dickinson, and youngster Misilifi Faimalo.

Whether up forward or pushing through the mids other players such as Shane Leat, Andy Christensen and Sam McKenzie are able to push up and help the transition that is a feature for the Hawks when it comes together. The talls up forward are hard to match up on. Brendan Clark and Barclay Miller have been hard to contain – and often dray a crowd of defenders which creates ground level opportunities for the Hawks crumbers.

The subsequent matches against Fiji and Canada saw the Hawks put in a couple of very professional outings which were underscored by the defensive efforts which restricted each opposition to a solitary goal in each match. For a super example of the Hawks transition capabilities - have a look at the youtube of the NZ v Ireland match and scroll to the 40 minute mark and watch the kick in after a close call behind by Ireland. The Hawks kick in was contested but once they got the ball it was a flawless team passage of play to bring the ball forward resulting in a set shot goal from skipper Andrew Howison.

The Hawks have kicked 40 goals and 32 behinds for the tournament. And while the table below shows that the Hawks lowest scoring quarter has been the first - it must be noted that until the round 4 classic encounter with the Irish Warriors that the Hawks had not conceded a single first quarter point. Prior to the Ireland game the Hawks had only lost one quarter - the final term against Nauru on the opening Sunday late afternoon - under the moonlight as it was. Overall the Hawks are +34, +50, +55 and +38 across each of the quarters. The Hawks have kicked 4 goals in a quarter on 3 occasions. 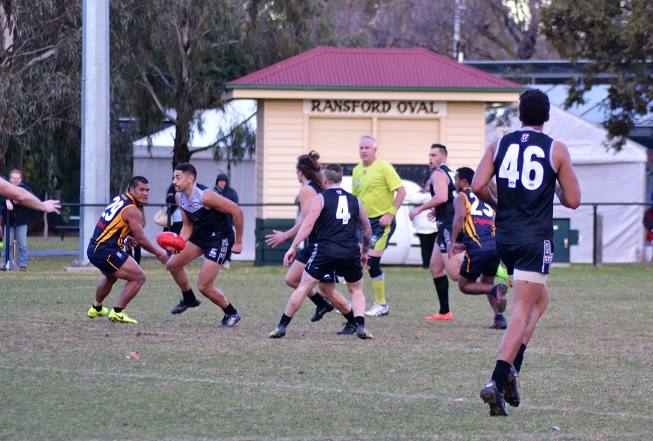 The defending champs - the PNG Mozzies - didn't start their campaign as they would have hoped. It was of course a first round fixture that jumped immediately off the paper to anyone perusing the tournament schedule. The IC14 Grand Final rematch. Alas for the Mozzies - a poor 1st and last quarter book ended a mid game rally - and it was Ireland who took the points.
The title defence looked to be on very shaky ground - however this squad responded in perfect fashion - with a first quarter effort of 6.3 against a scoreless Nauru (no mug opposition). So after just 4.7 in the first game from there on - the Mozzies slammed through 44.25 to finish the preliminary rounds with 48.32. On six occasions the Mozzies have kicked 4 or more goals in a quarter, 3 of those were returns of 6 against each of Nauru, the US and South Africa.

The experienced Amua Pirika continues to be the main focal point up forward and with 10 goals for the tournament; he is an ever dangerous presence in the front half. Perhaps the strength though is the variety of potential goal kickers and IC14 GF hero John Ikupu showed what he can do when he dominated the South Africa Lions in the opening minutes of Tuesdays match. Exciting youngster Hewago "Ace" Oea (turns 16 in November!!) has been hitting the board as well, along with 20 yr old Kataha Siwee.

International footy followers should be well enough aware of Brendan Beno and Gideon Simon, along with J.J.Peni (featured to the end of TVs "The Recruit") and skipper John James Lavai. Perhaps less known is a player such as Scott Johnson - but anyone unsure of his capabilities ought scroll to the 1 hour 30 minute mark of the PNG vs South Africa match from last Tuesday when at 13:38 into the last quarter Johnson launched and took an absolute specie. The Mozzies are a very dynamic side able to 'sting' repeatedly and rapidly the unsuspecting prey. Overall PNG are +46, +55, +63 and +20 across the 4 quarters. The final quarter number may be deceptive - as while the first 2 matches saw the Mozzies struggle in the final term they have turned this around and finished the last 2 matches full of running. They may just be perfectly primed.

In short - this game matches the best attack (PNG) against the best defence (NZ). Perhaps the biggest impact on this match will be the weather - out in the open spaces of the MCG - the ground level pace and skill of the Mozzies will severely test the Hawks.

The Hawks though look to have been preparing everything for this - their heavy rotations through the bench has developed a team discipline that is geared for this event. On past IC Grand Finals it is likely that 8 goals will win it. I've had a suspicion that New Zealand are the team to beat this tournament based largely on the quality of their AFLNZ Premiership competition. However - Ireland showed on Tuesday that the Hawks are not invincible.

If you are going to the PNG Mosquitoes vs NZ Hawks Grand Final at the MCG you will need to purchase a ticket to the Collingwood v Geelong match to gain entry. Selected gates will open early.  The match is scheduled to begin at 11.15am (AEST).  The match will be streamed worldwide live on the AFL International Cup Youtube Channel.[*1]