South Africa take the points in battle for Div 1 pride 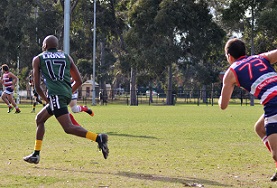 The Division One wooden spoon battle – or the fight for 9th place – sees two sides that have had a tough time of it over the previous two weeks. South Africa Lions with just the one hard fought win a week earlier under lights in Geelong against Fiji. Meanwhile Les Coqs Français have been outgunned in each game, although have flown the flag valiantly and not failed to score at least 2 goals in any of their outings.

With a cold wind blowing and a less than pleasant weather forecast – the Les Coqs skipper Thomas Depondt called correctly and opted to kick first to the southern or City end. The wind, partially at their backs however much more cross ground N-W to S-E. The Lions dominated the general play early doing most of the attacking however were getting caught on the defensive Eastern flanks and finding it hard to get on the board. Against the trend of play the French surged forward however in the tricky conditions the short by Raiwalui (#97) went out on the full beside the left point post. It was then South Africa’s turn to go forward for a similar result – as Marokoane (#18) put his free kick from the right forward pocket out of bounds to the near side. It wasn’t going to be easy. The wind making hitting targets tricky however in the early phases Asanda Funda (#9) was prominent for the Lions. Finally nearing the 14 minute mark of this arm wrestle it was the Lions who broke the deadlock via their big ruckman Mlamli (#28) who pushed forward (he would do this for much of the match – swapping in the ruck with the high leaping Velele (#6). 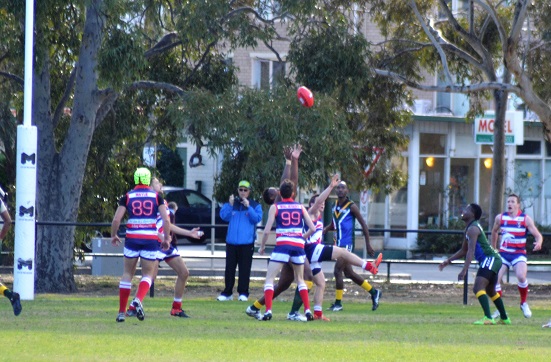 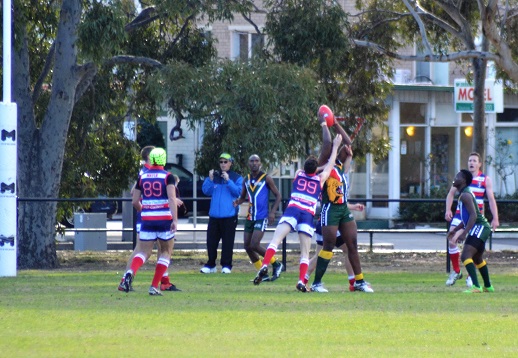 A two grab mark at the top of the goal square resulted in an easy conversion. By quarter time the game hadn’t reached any great heights – understandably given the wind – however the Lions with 1.1 had won the quarter.

Ironically the French were doing all the early attacking in the 2nd term to the Northern or Brunswick end. With Treuillet (#8) getting busy the best chance was after a quick kick by Bouchet (#17) went forward to be marked by the big guy up forward – Pierre Boscart (#19). The kick from the right forward pocket right into the wind was close – but slammed into the left goal post. But the French were getting into the game and getting some reward for their work. The Lions responded and a quick transition saw Dutyulwa (#5) deliver deep forward where the one on one marking duel saw Sokoyi (#1) recover the quicker to dish off a handball to the athletic Velele (#6) running past to slot home the Lions 2nd. Shortly after, it was Velele again with a snap that went just wide for a minor before the momentum swung again with the French pushing hard against the wind. Suddenly Boscart (#19) was marking everything and if not marking he was contesting at ground level and winning a free. However his short coming was in converting his efforts onto the scoreboard. A behind and turn overs when trying to share the ball rather than take the responsibility himself. The midfield battle was pretty even – the Lions having their guy player Moagi (#20) pushing into the mids and often matched up with French tackle machine Dagois (#29). Dutyulwa and Bouchet were both impacting for their sides while in the ruck it was the French skipper Depondt taking on the double attack for Mlamli and Velele. And it was Mlamli again, resting up forward, who marked the clearing kick from Moagi, and playing on from centre half forward took on the game and surged goal ward drilling a kick from just inside the ark to give the Lions a 3 goal buffer at the main break.

The third quarter proved to be as entertaining as could be wished for. The French with the slight end advantage of the breeze attacked early and after 3 Lions combined to kill the marking contest – the loose ball fell the way of Ludo Barrat (#20) who snapped towards goal – the bouncing ball went true for the French. Suddenly there was an extra spark – and after a French centre clearance it was their centre half forward Anthony Girard (#25) who claimed a free against Mlonyeni (#17). His kick forward found Boscart again – who this time went back and slammed it through for the 2nd for the French and suddenly the game was in the balance. South Africa lifted their work rate – and against the breeze were able to bring it forward – taking on the game by transitioning along the western flank – the attacking side. A flying shot from Lungile (#22) snuck through and the lead was back out to 14 pts. But – the French weren’t to be shut down yet – when Boscart turned onto his left 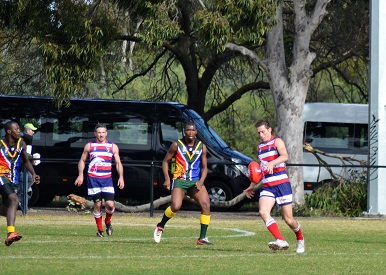 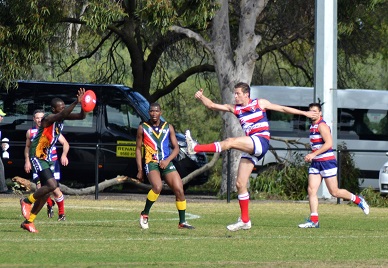 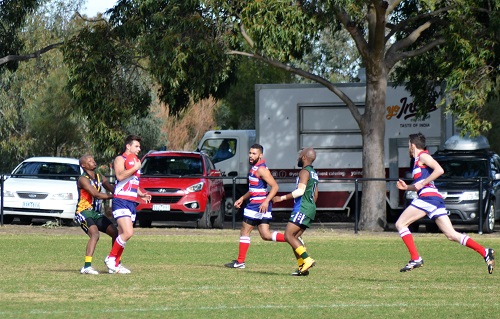 . Kicking from the arc he drilled a super long goal and was delighted with the effort. 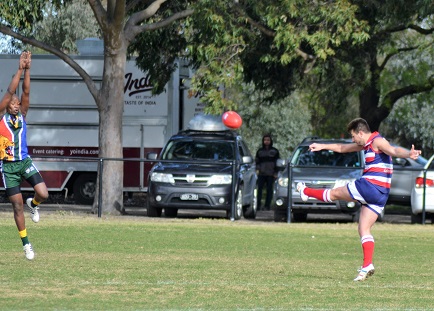 Continuing the passage of goal for goal – it was South Africa who got the crucial late goal just before the final break and again it was that man Mlamli up forward with a snap from congestion that sailed through and perhaps broke the hearts of the French. 2 and half goals down at the final break – the French had played perhaps their quarter of the tournament with 3 goals and just seconds off only conceding 2.

The final term became rather much one way traffic. The French were tiring and the South Africans continued to attack. Mlamli hit the board again with a clever right foot banana from beside the right point post. South Africa were peppering the goals but only found the majors one more time via the 2nd for Velele after a smart passage of player via the experience Matshane (#10) by foot to Sokoyi whose handball freed up Velele who finished off truly. The Lions were full of run and the French adventure was grinding to a half. Even Boscart up forward was fading and Zwane (#26) was reading the ball in flight better and repelling the last forward thrusts of the French. The final margin of 30 points perhaps a fair representation. South Africa just a little too polished but the French battled manfully to the end.