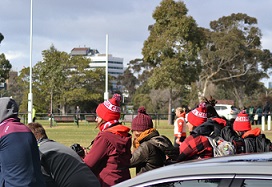 The Division One battle for 7th place promised a mighty battle between two sides that had tasted victory just once each across the tournament. Both sides had put up fighting efforts and while Fiji were favourites against 2011 rivals the French Les Coqs for the Tribe’s only win, the Canadians perhaps pinched one to get over Great Britian in the school round. Ironically both sides performed almost identically against the unbeaten NZ Hawks – produced a goal each in total as arguably the tournament favourites exerted their will.

The fifth game for each team - in 2 weeks - as the Canadian coach put it before the game "I know you're sore, they're sore too - who's tougher?" The final Friday asks more of many players than they imagined they could draw upon - as evenly matched opponents produce some of the most entertaining and fiercely fought matches of the tournament. And not letting anyone down - this match went down to the wire.

Winning the toss the Fiji Tribe opted to kick with what advantage the cross ground wind provided to the city or Southern end. As the quarter got underway it became apparent that getting trapped on the eastern side would make scoring difficult. And that’s how it was playing out early – an arm wrestle that the Canadians were happy to engage in – chewing up time. Their bench urging on “Daisy”, “Irish”, and to talk, to instruct. The North Wind were able to push forward – with numbers back they found themselves entering an open forward zone and a marking infringement against Dylan Wolfgramm (#15) –who was matched up on the dangerous McNabb wearing Adam Nash's (#7) saw a super kick against the wind sail through the big sticks to put the North Wind on the board first. 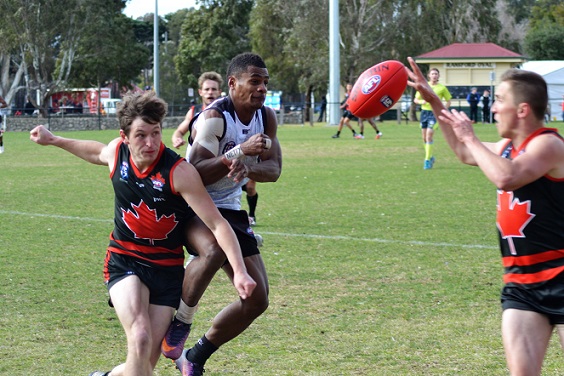 The Canadians continued to create chances – and after Wolfgramm cleared the D50 – the high ball was marked by the clever Eric Klein. Benefitting from a 25m penalty and catching the Tribe defenders napping – Klein powered goal ward – through the unguarded mark and slotted a fine goal from the defensive pocket. A later behind to the North Wind saw our first view for the match of the North Wind kick in zone. Wolfgramm had the task for Fiji of taking kick ins – and from the Northern end his plan was generally to go defensive side which was where much of the quarter was played out. The Canadian defence had been on top and as per usual the general down back being Giancarlo Brancati (#10).

Fiji finally warmed to the task in the 2nd term – creating early chances although the snap from Bativoli (#21) missed – but they were looking more dangerous. However Canada again responded with a 3rd goal, at the 8 and a half minute mark, again via Nash, who marked a kick that flew left across the face of goal – on the breeze – and judged it better falling back. The goal was from a tight angle but employing the Stevie Johnson technique he opened up the angle and bent the ball through. During this period the Tribe were starting to get a little frustrated – perhaps on the wrong side of the umpiring. But persistence paid off, after 13 minutes it was Salavou (#19) who got on the end of a forward move via Nawaqatabu (#20) to Vateitei (#6) that found Salavou in the right forward pocket – the kick right over the umpires head was a neat finish. By the long break it was Canada by 11 but the game had tightened up and Fiji looked to be gaining momentum, with a neat running game developing and strong defensive combinations from Wolfgramm, Macanawai (#18), and Tuiova (#16) – and created late opportunities but couldn’t find another goal to go into the main break.

The third term saw both teams having periods of ascendency – Canada had a chance to extend their lead but were doing it the hard way – in increments of 1. Clay Lund (#6) was super busy for the North Wind and was in everything, tackling, having shots, one touched on the line. Four behinds was the return and the door was still ajar for the Tribe. And the Tribe had a crack at going through – getting their hands on the ball they began attacking. Still Brancati was standing tall for the North Wind but after behinds to Vanitabua (#14) and Salavou, it was Alipate Kiti (#4) who got the desperately needed goal. As the quarter drew to near to the end, Fiji created another chance after Masivou (#22) won a free against Lund (who was dirty on himself) – however the ball went wide for a behind and the North Wind held a 7 point margin at the last break. .

The Fijian coach urged his players to take the game on, to kick long, and to call on those hard training sessions at Albert Park and the sand runs – reminding them that this last 17 ½ minutes might be the last time some of the players get to represent their country – to make the most of it. One more effort. The game was set for a classic final quarter and it didn’t disappoint. The North Wind, with the wind playing tricks ironically enough – was now perhaps favouring the Tribe; the North Wind were flooding back and trying to defend their slim lead. Fiji did most the attacking and created the clearest scoring chances but just couldn’t get that elusive goal. The first behind to Macanawai (#18) snapping from the right forward pocket – the pressure was showing when Canadian defender Jacob Martin (#14) marked and kept on running only to be tackled and turn it over. The shot from Pauli (#24) reached the teeth of goal but again Canada repelled. By now – there were only 2 players in the Canadian half. 9 mins in and another behind to Fiji – a mark deep forward by Vunitubua (#14) but the carefully steered kick went just wide. It wasn’t easy to clear though – the ball almost permanently in the Fiji right forward pocket with the wind magnetically drawing it back at all times. The final score was a long short from Maiqereqere (#10) that brought the margin to 3 points. And when Canada earned a free at 17:15 on the clock their players knew they’d got the job done. The conquered Fiji Tribe had given it their all and on another day would have done enough to win the match. For the North Wind, the game had been set up in the first quarter and from there the North Wind had never relinquished the lead.

Note the AFL site lists #33 McNabb with the 2 goals.